“Frack Wall Street, Not Our Water”

“The People Are Rising, No More Compromising”

It’s Earth Day, and I am in Zucotti Park holding some parsley given to me by an unknown activist, chanting “oceans are rising, no more compromising!” with about 200 other people. It’s the beginning of Global Climate Convergence, and I decided to do some field research on the status of the grassroots climate movement. We started in the park, did a little tour of Wall Street and other notable locations, such as the office of the New York State Comptroller. We then returned to Zucotti Park and called it a day, feeling a little more cheerful and optimistic about the future.

So what did I learn? Perhaps the most remarkable feature of the event is the diversity of the movement. Since grassroots activism is not drawing huge masses of random New Yorkers, a typical activist event draws in just about everyone who is struggling against something. Just say “I oppose corporate power” and you are in. This itself is not a problem, as any activists understands that coalitions have to be formed and synergies found. But I was a little troubled when a representative of the Friends of the Soviet People — I am not kidding, they exist — gave me a flyer and kept shouting “Down with the Federal Reserve Bank.” That’s so far from why most of these people protest that it boggles my mind, and I’m not sure that this is the kind of ally that climate activists are looking for. But, it’s a public event. At any rate, I was there not to restore the glory of the Soviet Union.

On the positive side, the event was completely peaceful and very well organized. It was impressive how the lead activists were able to steer the motley crew of various warriors, attracting mostly positive attention — the Wall Street types were trying to avoid eye contact, but most people were supportive and took photos of us — and creating a fun and welcoming atmosphere. The group was remarkably diverse in every possible respect. Back in the olden days when I was out in the streets handing out flyers, the typical activist event had a huge female contingent and only male leaders. But this was not the case today, as many of the lead activists were women. That’s great news and gives credibility to the claim that it’s a people’s movement. Similarly, the racial and age distributions had a high variance.

What more can I say? Perhaps the most important question is whether or not this kind of action can lead to change. I am optimistic, provided the movement can grow. Moderate environmental groups working within the system need someone to truly challenge politicians and corporate leaders to change their policies and behavior. In an ideal world, the grassroots movement puts pressure on leaders to consider solutions provided by more moderate groups, such as the Environmental Defense Fund. Then, politicians give in to the demands of the moderate groups to deal with the rising pressure. We are very far from this ideal, but one has to start somewhere.

I’ll finish this report with some snapshots from the event. They cannot possibly convey the lively spirits and great feeling of working together for a better world, but they’re pretty coool nonetheless. For more such action in your community, check out 350.org. 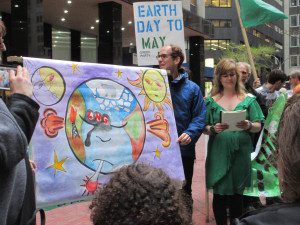 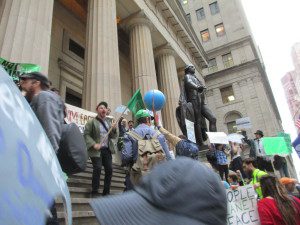 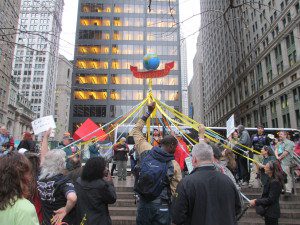