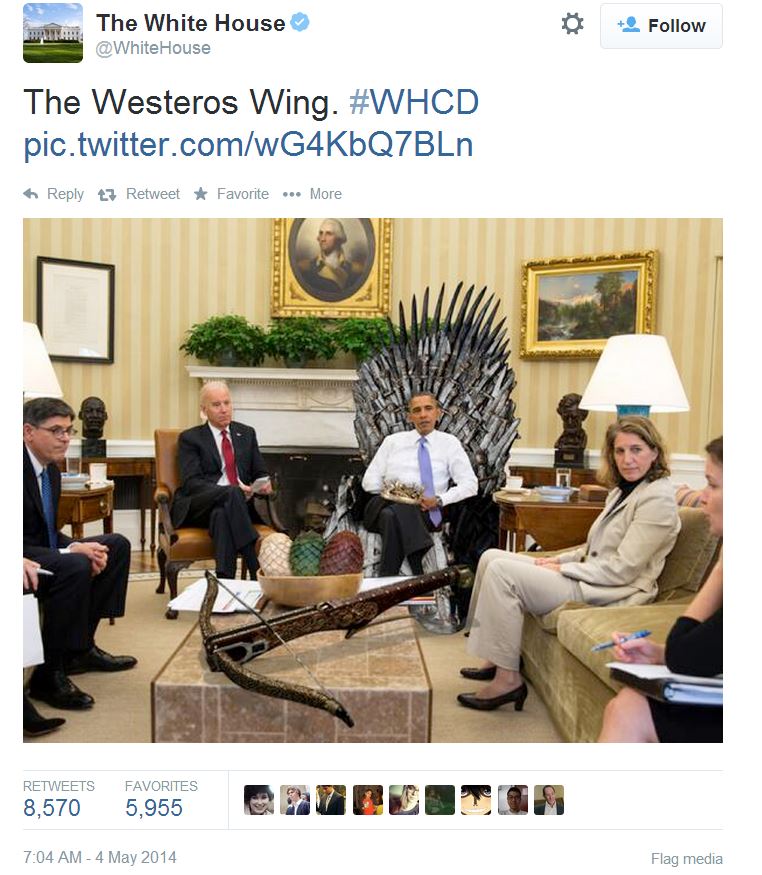 On behalf of Dan Drezner and myself I am pleased to announce the lineup for our panel proposal to the 2015 International Studies Association Annual Conference in New Orleans, which I submitted today.

The call for proposals specified we were looking for papers specifically investigating the empirical impacts of / circulation of ASOIAF/GoT cultural artifacts in real-world politics. (An example of which might be the above tweet, which was disseminated on the official White House twitter feed earlier this month).

As such we are not seeking papers that critically analyze the books/show as a political text itself, or that apply pedagogical lessons from the show to the real world, or that treat the popular cultural artifacts or their fandom themselves as a primary object of study through political lenses (though any of these aspects might conceivably come to play in papers for this panel). Rather, we are interested in rigorous, data-driven research taking seriously popular culture (in this case ASOIAF/GoT) as an independent variable on political phenomena and empirically examining ways in which its fictional memes, concepts or allegories infuse or inform real-world politics, political phenomena or political debate (widely construed) on issues other than Game of Thrones itself.

We ended up with quite an interesting set of projects. With the permission of the authors, the abstracts we are submitting are below the fold for your reading pleasure. I look forward to seeing many of you there next spring. Characters welcome.

“Winter is Coming”: Can Game of Thrones Change Climate Politics?
Manjana Milkoreit
ABSTRACT: The Game of Thrones (GOT) series has inspired a small but growing set blog posts that link the themes of the TV series, especially the ominous phrase “Winter is Coming,” with the threat of climate change on planet Earth. Currently, two types of blogger engagement seem to be emerging and will probably develop during and after the fourth season currently showing on HBO. First, political and opinion posts draw multiple parallels between the responses of the fictional peoples of Westeros to the looming threat of winter and the responses of people on Earth to the prospect of climate change. Second, a number of scientists, science communicators and geeks explore the climate of Westeros, and use GOT themes to communicate climate science to the public.
This paper explores the content of these two distinct discourses – one focusing on politics, the other on science – using a combination of methods: qualitative content analysis, interviews with blog authors and cognitive-affective mapping. Exploring parallels to the role of science fiction in triggering social and technological change, the paper argues that GOT is part of a new genre of climate fiction, which plays an interesting and unexplored role at the science-policy and science-society interfaces.

Where is Essos? The Absence of the International in Political Commentary on Game of Thrones.
Scott Watson
ABSTRACT: Building on the growing body of work exploring how popular culture shapes
and intersects with our understanding of world politics, this paper examines the lessons that political commentators in North America draw from the Game of Thrones (GoT) about international politics. Examining editorials from 4 national newspapers in the United States and Canada, the paper suggests that overwhelmingly, political commentators focus on ‘domestic’ actors (those from Westeros) and use them as a moral
critique of political practices at the national rather than international level. In short, GoT operates as a moral frame for how national politics should not be conducted. Political commentary using the GoT frame is rarely applied to non-domestic political actors and is noticeably silent on international others within the program (those from Essos). The absence of the international in political lessons drawn from GoT essentially accepts and
reproduces an East/West binary in ‘the real world’ similar to that in the GoT universe (Westeros/Essos), and delineates the ‘limits of moral possibility’ in the practice of politics along a domestic/international binary.

Words, Images, Lannisters: Game of Thrones and the Re-Emergence of First Image Analysis.
Joseph Perry and Miles Evers.
ABSTRACT: The Ukrainian crisis has raised media attention to US-Russian security relations to
levels not seen since the end of the Cold War, but been couched in an imagery and discourse starkly different from structural discourse dominant then. Current media coverage frequently employs a first image analysis to cast Putin not only as the megalomaniacal driver of conflict, but representative of the fictional character “Tywin Lannister” in the Song of Ice and Fire series. Given the recent memory of the Cold War, it is puzzling that the media has transposed fictional personalities onto state leaders rather than reverted to the historical memory of power politics to explain such an uncertain crisis. We posit that the media structures and diffuses public discourses of international crises. The popularity of Game of Thrones made its “first image” political narrative an accessible
frame of reference to the crisis. Assuming the primary economic interest of the media is to explain current affairs in the most digestible fashion, the use of fiction itself being an easily digestible narrative is understandable. Relying on textual analysis and survey analysis we hypothesis that Games of Thrones is utilized more then Cold War analogies in making the current crisis more digestible.

Game of Thrones and Effects-Based Operations
Robert Farley and Alexander Melynkovich
ABSTRACT: We propose to examine the incidence of the use of Game of Thrones terminology in tactical and operational military thought. We are particularly interested in examining how military thinkers may have employed A Song of Fire and Ice references to illuminate and extend discussion of Effects Based Operations, air warfare, and disruptive military operations. We argue that warfare in A Song of Fire and Ice combines medieval organizational and tactical forms with a modern understanding of strategic decision and a Clausewitzian appreciation of “centers of gravity.” This conceptualization of warfare lends itself to several potentially productive lines of inquiry with respect to how attacks on nodes of communication and control can affect organizational and alliance behavior. We explore the extent to which these inquiries have found their way into contemporary strategic thought. We plan to research this question through a content analysis of major military and strategic journals (Armed Forces Journal, Parameters, Naval War College Review, Infinity, Air and Space Power Journal, etc.) as well as through interview and discussion with uniformed and civilian members of the defense community.

Game of Thrones: Mimesis and Critique
Ben Coulson
ABSTRACT: Since the airing of the first season of Game of Thrones a healthy avenue of academic discussion has followed on how the HBO show relates to, reflects and can explain international relations. Most analyses tend towards re-circulating particular IR logics, namely that of ‘power politics’, the logic of anarchy, or more expansively the power of norms. More broadly, numerous news stories speak of a Middle East or Asia-Pacific Game of Thrones. While these references attempt to make the world sensible through analogy, they function to normalize a particular comprehension of the Game of Thrones world as merely a mimetic representation of the world ‘as it is’. This paper will offer a critique of these readings of Game of Thrones and offer an alternative rendering by asking what if we consider identity as a major factor in the behaviour of political entities, either through House Stark or House Lannister, or how the US and China encounter each other in the Asia-Pacific. In this way Game of Thrones may serve as a critique of international relations, an opportunity to as the fantasy genre does, imagine other possible worlds.

And The Winner Is?