CALL FOR PROPOSALS:
“Game of Thrones and International Relations: Empirical Investigations”
Deadline: May 26, 2014 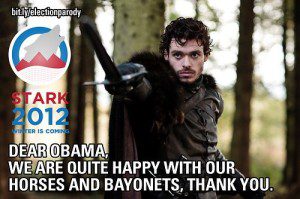 Dan Drezner and I seek paper abstracts for an International Studies Association 2015 Conference panel proposal examining the relationship between the A Song of Ice and Fire book series and/or HBO hit series Game of Thrones and global political phenomena (or “first-order” representations of those phenomena). In other words, this panel focuses specifically on empirical investigations of the circulation of pop culture ideas in “real-world” foreign policy / global processes.*

As such we are not seeking papers that critically analyze the books/show as a political text itself, or that apply pedagogical lessons from the show to the real world, or that treat the popular cultural artifacts or their fandom themselves as a primary object of study through political lenses (though any of these aspects might conceivably come to play in papers for this panel). Rather, we are interested in rigorous, data-driven research taking seriously popular culture (in this case ASOIAF/GoT) as an independent variable on political phenomena and empirically examining ways in which its fictional memes, concepts or allegories infuse or inform real-world politics, political phenomena or political debate (widely construed) on issues other than Game of Thrones itself.

While we encourage a wide variety of projects, examples would include: content analysis of GoT references in political speeches, political tweets, or other discourse; survey research linking GoT fluency with political mobilization or public opinion on political issues; interview or participant-observation research on the deployment of GoT metaphors in policy communities; case study research on instances where GoT artifacts trigger or circulate in the context of international or global policy-making or political debate on extant issues; studies of the relationship between GoT imagery affects or infuses “everyday” politics (social movements, gender relations, political discourse of other kinds as it relates to the international) among and beyond its viewership; or comparative examinations of how GoT engenders popular understandings of actual international relations for different audiences, a research agenda Steve Saideman hints at here.

Selected abstracts will be included on an ISA panel in New Orleans in 2015. We also envision a possible journal symposium on this theme. To submit an abstract for consideration as part of this project, please email both charli.carpenter@gmail.com and ddrezner@gmail.com by May 26, 2014. Please include an abstract and short cover letter that explains why your paper is a good fit for this specific approach to the pop culture/IR inter-text.

_____________________
*For the purposes of this project, we distinguish conceptually between “pop culture narratives” and “real world politics” for the purpose of empirically exploring the relationship between the two. However, one must note the distinction between “reality” and “fiction” is somewhat arbitrary given that pop culture artifacts are part of the real world, and that all “reality” is accessed through representations that differ only in the extent to which they are fictionalized. Nonetheless, we argue that there is a qualitative and analytically useful distinction between representations intersubjectively understood as fictional (e.g. literature and popular culture artifacts) and representations collectively understood as reflections of lived “reality” (e.g. news stories, political rhetoric, etc). On the distinction between first order and second order representations of political phenomena see Iver Neumann and Dan Nexon, “Harry Potter and the Study of World Politics” in Nexon and Neumann, eds., Harry Potter and International Relations, p. 7, Roman and Littlefield 2006.