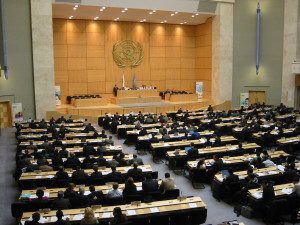 I am in Geneva this week to participate in the Convention on Conventional Weapons’ Experts’ Meeting on Lethal Autonomous Weapons Systems. There, I’ll present survey data I collected on US public sentiment around autonomous weapons, joining global civil society in reminding world governments of the Marten’s Clause in the preamble to the Hague Convention. This clause, originally inserted to protect irregular non-combatants in guerilla wars, enjoins states to consider the “dictates of the public conscience” in determining the lawfulness of means and methods of war not openly prohibited by international law.

It is an exciting moment for humanitarian disarmament advocates. Concern over the use of fully autonomous weapons has hit the global agenda faster than perhaps any disarmament campaign on record.* That the Convention on Conventional Weapons has taken the issue seriously enough to throw a multilateral experts’ meeting is a sign of the impact of disarmament NGOs in shaping global discourse on this issue of autonomous weapons – perhaps even giving “human security” a new meaning. Mainstream media are covering the event. So is the Bulletin of the Atomic Scientists. 20 Nobel Laureates just issued a sympathetic statement.

However there is still much to do of course: getting something on the international agenda is but the first step in a complex process of norm development. Below the fold is a very quick pre-flight round-up of some interesting analytical perspectives on autonomous weapons hitting the internet in the last few days. These will inform the perspectives of NGOs advocates, experts and diplomats at the conference, where concepts like “autonomy” and “meaningful human control” will begin to be worked out by stakeholders.

I hope to get some more reflections up in the next days, on the socio-diplomatic construction of concepts like “humanity” and “autonomy” and “lethal” but meantime follow the coverage of this important event on Twitter at #stopkillerrobots or #CCWUN and the campaign @bankillerrobots.
___________
*For more on the origins of this campaign and its massive agenda-setting success, see my new book “‘Lost’ Causes?” on shelves next month or pre-order here.

#BringBackOurGirls- Doing Nothing as ‘Activism’