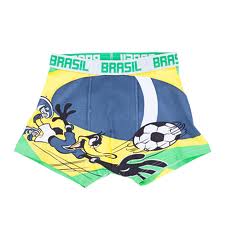 I’m so glad the semester is over so I can leave Friday to head to Brazil for a three week short course with my colleague Eugene Gholz. The topic is “Rising Powers and Global Governance.” We have reprised our 2010 edition of our South Africa short course (notice the pattern). I’m hopeful I’ll be able to provide some flavor from our trip as we have an exciting series of meetings with government officials, scientists, academics, practitioners, diplomats, activists, and members of the business community.

We’re focused on three main themes, the environment, public health, and the economy, and we have stops in Rio, the Amazon city of Belém, and the capital Brasilia. I’m hopeful that the trip is eventful but drama-free, as my wife and two-year old will be joining me in short order. In preparation for this trip, we’ve put together a hell of a syllabus. I’ll post a version of it soon from the road. In the meantime, we identified a few Brazil-centric readings as teaser articles for our students to whet their appetites as we head down. I’m linking to some of them here.

I think everyone is waiting, wondering if the World Cup will come off without a hitch. The preparations seem to be belabored and late. The population is restive, with corruption, cost overruns, and the lack of accountability making this soccer-mad but highly unequal country question whether the Cup was the right way to spend the nation’s money. There are thousands of squatters occupying lands right near the São Paulo football stadium, and today marks a day of simultaneous protests against the World Cup across 50 cities. There are questions about whether the country has the appetite or even the ability to pull off the Olympics on top of the World Cup, with preparations lagging way behind. On top of all this, it’s an election year, with national elections scheduled for October and the Workers’ Party Dilma Rousseff running for re-election. It should be an interesting time!

There are protests today in 50 cities across Brazil by homeless groups and labor organizations opposed to grand expense dedicated to the World Cup. Last year, the middle class joined the poor in large numbers for protests during the warm-up Confederations Cup. How many will join today’s protest. We’ll find out. 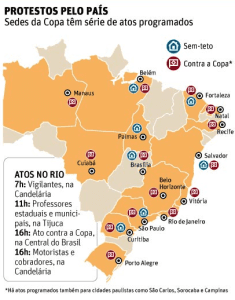 Other stories that highlight similar concerns include:

“Glauco Arbix, who heads a government agency called FINEP (the main funding engine for innovative technology businesses, a task Americans would never dream of entrusting to a government agency), and who has worked with both Lula and Rousseff, says, “She has a different style, totally different. She’s an econo-mist by training. She has a methodology she looks for coherence, reason. I don’t know if those words are any help for a President. They diminish your flexibility.” He added, of Lula, “If he liked you and you presented a plan, he would say, `Go, my son.’ She wants to know how you put things together, what your expectations are, how you’ll measure results.”

EVEN after huge nationwide protests last June, when millions of Brazilians took to the streets to vent anger at ineffectual politicians, President Dilma Rousseff’s approval rating never dipped below 45%—and then rebounded. And even though more Brazilians tell pollsters they want “change” rather than “continuity”, few pundits expect Ms Rousseff’s Workers’ Party (PT) to be booted out in October’s presidential election after 12 years in power. But an upset may be on the cards.

Polio and the International Politics of Eradication: CIA Vaccination Ruse, Vaccine Trust, and DNA as a Tool of War