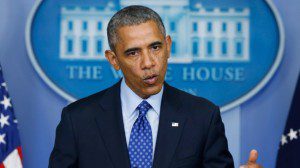 President Obama announced that the U.S. will send up to 300 military advisors to assist the Iraqis in the fight against the Sunni Islamic State in Iraq and the Levant, ISIL, but there will be no American troops on the ground and no air strikes for now. “Ultimately, this is something that is going to have to be solved by the Iraqis” said Obama, urging Iraqi leaders to find a solution. Since the Iraqi foreign minister formally asked the U.S. to launch airstrikes against ISIL, analysts have been debating what airstrikes may and may not accomplish. On the lawfare, just security, and opinio juris, law scholars have been discussing whether the President has the domestic legal authority to order airstrikes, and whether a military action would violate international law. Obama’s decision to send advisors rather than re-enter the war in Iraq is likely to add ammunition to ongoing debates about his leadership style? Is Obama’s leadership in foreign policy correctly “disciplined” or passive? While acknowledging that the turmoil in Iraq presents the President with a dilemma, critics are already calling for a more assertive American response. Get rid of Maliki! Hit ISIL with drones! Re-establish the U.S. presence! The administration might very well shift gears and order military strikes against ISIL in Iraq and Syria. But I think Obama’s decision to first assist Iraq rather than immediately take over the crisis is an example of good leadership. When the U.S. forces withdrew from Iraq in December 2011, the President maintained that we were “leaving behind a “sovereign, stable and self-reliant Iraq, with a representative government.” Well, maybe not stable and sufficiently self-reliant, but for better or worse, Iraq is a sovereign state, and the Iraqis themselves have to devise a political solution -with or without Malak’i- to end the sectarian conflict. I do not like every aspect of Obama’s foreign policy, but he is treating Iraq as a sovereign ally rather than a child. I think this is good leadership. Image: Msnbc, the grio

Is All of This Focus on Transitional Justice Really Worth It?