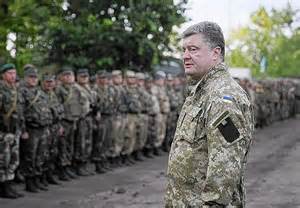 Just as the international community appeared at long last to be taking a stronger stand against Russia, President Putin upped the ante. Unlike its annexation of Crimea, Russia is now in open warfare with Ukraine on its eastern border. There is fresh evidence indicating not only that Malaysian Airlines Flight 17 was shot down by Russian-aided rebels in eastern Ukraine, but also that the Russian military has been firing missiles and artillery from its own territory at targets inside Ukraine proper. Russia has redeployed over 20,000 soldiers near the Ukrainian border.

The SA-11 mobile missile battery was supplied by Russia and crossed into Ukraine in a large Russian military convoy a week in advance of the attack, which included additional missile batteries. Radar information, wreckage from the crash, and intercepted phone calls implicate the rebels directly, as well as Russia’s involvement in the cover-up. The crash site was thoroughly tampered with by the rebels, who delayed releasing the bodies of victims and have yet to release the monitoring officials from the OSCE that they have held captive for months.

Russia decided to up the ante of its double game prior to the shooting down of Flight 17, a response to the recent gains the Ukraine military forces have been making against the pro-Russia rebels. In fact many of these rebels are not just pro-Russian, they are full-fledged Russian citizens—including some notorious bad apples that Russia previously used in not so subtle attempts to destabilize former members of the Warsaw Pact.

But just as the EU is about to drop a new sanctions hammer on Russia, the Russians have taken the Putin Doctrine to a new more dangerous level. They have transitioned from weeks of waging irregular warfare against Ukraine to low grade standard warfare, and they appear to be preparing to raise that grade and potentially invade Ukraine Georgia-style. What more crystal clear evidence could there be that western allies have yet to establish conventional deterrence vis-à-vis Russia?

The time has come for the West to make a more decisive move to counter President Putin’s open war against Ukraine. To begin with President Putin has introduced a perilous new norm into the international system, namely that it is legitimate to violate the borders of other countries in order to “protect” its people with military means if necessary. The Putin Doctrine represents a serious transgression of the status quo that has guaranteed the continent’s security since the end of World War II, moreover one that violates the most essential tenet of the post-1945 international order.

The aim of western actions must involve compelling Russia to cease engaging Ukraine with artillery from across the border, end all support of the rebels in eastern Ukraine, and ensure complete respect for its territorial integrity. In order to bring about this result—and ensure Russia does not continue its double game with a tactical delay—more than economic sanctions alone are necessary. While the sanctions themselves can be calibrated in such a way as to meet some of the concerns of European allies while also being tougher, it remains abundantly clear that Putin will take as much of Ukraine and other territory in the region as western allies allow.

It is important to understand that conventional deterrence was not sufficient prior to or even during the crisis. The U.S. and Europe should have gone further, faster. The sanctions should have been tougher in the first round, including targeting energy interests. What would have ratcheted up deterrence in time would have been a military ground exercise in Poland—simulating response to a Russian incursion—combined with announcements of new bases in Poland or the Baltics and a direct credible threat of significant lethal aid for Ukraine.

Western allies should now threaten that if Russia does not cease all support of the Ukrainian rebels within a week it will begin supplying direct military aid to Ukraine. This should not include military personnel, but it should include anti-tank missiles, surface-to-air anti-aircraft missile batteries, and a variety of additional infantry weaponry. Tanks and armed personnel carriers could also be dangled, if necessary. Western allies should further proceed to schedule a NATO exercise in Poland early this fall, with another to occur in early 2015 and still another late next spring.

Exercises and the threat of lethal aid to Ukraine are necessary because economic sanctions alone are insufficient to compel Russia to change its behavior. Russia actually increased its interference in Ukraine despite experiencing a downward spike in GDP, all the way to 0.5%, due to earlier rounds of lighter sanctions. However, tougher sanctions are still necessary to achieve comprehensive coercion, but perhaps in a tailored form that will allow the Europeans to continue protecting some of their economic interests.

The sanctions can be calibrated so as to be sufficiently punitive to Russia, but less costly to European allies. The U.S. should continue to levy the harshest sanctions, including an extension of its latest round that targets some of Russia’s key firms and key energy and industrial sectors, which is providing the most critical instrument. In addition the U.S. needs to set the stage for heavy duty Iran-style sanctions, including not only bans on individuals and financial institutions but also complete bans of Russian-origin imports of a vast array of commercial products.

European allies should extend their ban on individual Russians close to Putin, and add a comprehensive ban on trading any industrial components that can be used in the manufacture of weaponry. They should furthermore ban any commercial contacts with Crimea or companies doing business with it. And France should suspend its deal to sell two Mistral warships to Russia, while threatening to cancel them altogether unless allies elicit a lasting change in Russian behavior.

In this manner, using both military and economic carrots and sticks, western allies stand a moderate chance of persuading Russia to withdraw its support from Ukrainian rebels and begin to respect the sovereignty of its borders. This would furthermore allow the West to delegitimize the new norm endorsing violations of other countries’ sovereignty, and in the process penalize Putin severely for his actions including the annexation of Crimea.

But the dithering of the U.S. and Europe has been costly. A week ago these actions would have had a far better chance of causing Putin to blink for a second time than they do now. Russia has moved with a brazenness that astonishes all the western security experts who just wish this would go away. But Putin is not just wily but bold as ever. He has made some mistakes in his own chess moves of late, but those will be eclipsed if western allies do not respond rapidly in kind to the raising of the stakes in the last few days.

The stakes are a whole lot higher than the average observer seems to think. If Russia invades and either annexes eastern Ukraine or leaves it in limbo for an undetermined period, it will be further emboldened to go for the Transnistria chunk of Moldova next—and probably a broader slice of southern Ukraine that includes Odessa while they are at it. But more dangerous still is the degree to which the Chinese—who are already abiding by the Putin Doctrine themselves—will themselves be emboldened in the East China Sea and South China Sea. They will calculate that the U.S. will not do very much when they get more brazen themselves, rightly or wrongly.

At least in Eurasia, we now have a new Cold War on our hands. It is patently obvious that this concept in strategic, economic, and philosophical terms does not apply to other regions and an array of other aspects of Western-Russian relations, but in this region—as much as none of us want to believe it—it has come to pass. Western allies are now at a crossroads of their own. Will they do what it takes to meet their joint security interests in the immediate term, or will they continue to stare into the abyss as they let the global geostrategic tectonic plates shift when they could have stopped them?