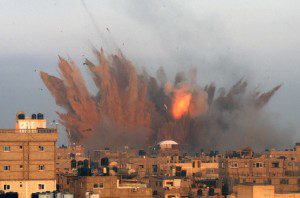 Lots of ink is being spilled over Gaza. Watching and reading, I am reminded of something I read early in my career, while writing my second book. This thing I read was a manual for reporters, written by veteran British war correspondents Annabel McGoldrick and Jake Lynch. Jaded by knowledge of how the media can exacerbate or dampen conflicts, their manual contained specific suggestions for producing “peace journalism.”

For example, McGoldrick and Lynch suggest reporters avoid portraying conflicts in zero-sum terms, emphasizing essentialist divisions, adopting language that victimizes or demonizes, or reporting only the horrors. Instead, they suggest, war reporters should “disaggregate the two parties into many smaller groups pursuing many goals,” engage in “asking questions that reveal areas of common ground,” and ask victims “how they are coping and what they think.”

Like many I am today watching unfolding events in Gaza with sadness, outrage and a sense of helplessness. As a non-expert in the region, I have very little value to add in terms of insights. But what I can do, I figure, is a) pass along things I’ve seen come across my feeds that exemplify this kind of reporting and b) dwell especially on some under-covered angles that might complicate the conventional story of intractable hatreds in ways consistent with McGoldrick and Lynch’s suggestions.

Second, on thinking outside the box: 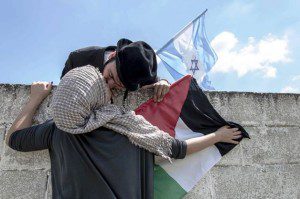 I appreciate Ari Kohen’s call for even-handedness in our outrage, and I appreciate the anecdote in Jon’s recent post, asking a West Bank resident whether a mass non-violence movement had been considered. It surprised me, given all the evidence, that his question was laughed at.

The hypothetical and unrealized image Jon’s question catalyzed stuck with me: throngs of Palestinians scaling the separation barrier unstoppably with flowers rather than rocks like Taiwan’s Sunflower revolutionaries, martyring themselves through sit-ins and resistance marches rather than suicide vests like legions of Southern American blacks, standing hands open in front of Israeli tanks like Chinese pro-democracy activists or crowding peaceably into public spaces like Tahrir legionaires.

Over the past days, it defied my imagination that there were not at minimum currents of such an alternative strategy, an alternative agenda in Palestine/Israel, and so I began actively keeping an eye out for them: voices situated in neither box, aiming to bridge divides, an inkling of a peace movement. Perhaps they were invisible because they were not being covered, or talked about. Below are a few stories I dug up that the mainstream media might aim to follow more critically, currents we might seek to strengthen as commentators and observers and pundits and reporters and analysts  if we take seriously Goldrick and Lynch’s advice now.

Gaza Youth Breaking Out. This coalition of disaffected young people sounds less like the nationalists, victims or martyrs who dominate news coverage and more like their counterparts in Egypt, Tunisia, and Bahrain. They are fed up with the occupation, Hamas’ incendiary strategy and the fiddling of the international community all three. Part democracy movement, part e-bandit, the group issued a manifesto in 2011, and have struggled since with how to organize effectively from behind a self-imposed (and eminently rational) veil of anonymity in the absence of skill, resources and media coverage. What if instead of continuing to report on / reify the mainstream narratives of this conflict we covered the youth movement? To tap or support alternative perspectives on a sustainable solution, find out what these young people want, are willing to do and are capable of; provide them resources to organize more effectively than they have done so far. (Of course to be fair, GYBO needs to accept interviews: they are currently boycotting the mainstream media due to what they claim is its one-sided narrative. Perhaps they need help from the Engaged Scholars’ Initiative?) At any rate: follow them on Twitter here.

Israeli Soldiers Breaking Silence. What if instead of focusing on IDF heavy-handedness, which is all too obvious, reporters covered the brave IDF soldiers who are speaking out against this behavior, from their own experience? Since 2004, Israeli non-profit “Breaking the Silence” has run a testimonies collection project called “Soldiers Speak Out.” Their Facebook page includes a tribute to murdered Palestinian teen Mohammed Abu Khdeir, and a newly released video exhorting the Israeli government to face how its colonial policy is corrupting its once-virtuous military culture well as harming civilians and sustaining conflict. Yet I have found all too few stories like this one, especially since things escalated.

Women’s Peace Organizations Mobilizing Across Religious Divides. As political scientist and peace ethnographer Cynthia Cockburn has chronicled, feminist movements often are uniquely able to build ties across ethnically, religiously or politically divided communities, finding common cause as sisters, mothers and wives and as women opposed to militarism generally. Cockburn studied the work of Women in Black in Israel, but similar movements surely pop up, falter, and cling to survival in Gaza, Jerusalem and the West Bank. Identification of, support for and coverage of what micro-level efforts exist – rather than covering only the debate between consistently polarized elites – could prove transformative and open space for alternatives.

Other outside-the-box angles exist: the international media could be focusing on the productive efforts of faith leaders, the practical efforts of families to reach out in peace rather than strike out in grief, the BDS movement – a non-violent Palestinian civil society initiative – or the many other transnational efforts at human rights solidarity? What if all these players, rather than Hamas or the IDF, monopolized the attention and the media narrative? How might this transform the conflict?