Although I’m technically off the grid, the news that ISIS proclaimed women and girls in Mosul should submit to genital mutilation (FGM), and the report’s subsequent debunking, compel me to emerge from hiatus.

Leaving aside why a fake report on FGM should be viewed as needed to discredit a group who is  executing civilian, forcibly displacing minotiries and destroying cultural property,  I have mixed feelings about the outcry this story raised.

On the one hand it indicates a widespread norm in the West, in UN circles and among the Muslim population in Mosul to view FGM as a heinous human rights violation: that’s a good thing.  That said, the appropriation of women’s issues to denigrate men “we” might wish to cast as barbaric enemies has a long history and has rarely served women or feminist interests. Using feminist causes for propagandistic ends should not be confused with genuine feminism (which we can define for simplicity’s sake as HuffPo did today) since it undermines efforts to reach gender equality in two ways.

First,  it perpetuates conflict through stereotyping and emnification, conflicts in which women often suffer disproportionately.  If we are following global affairs critically, we should be conscious of these dynamics and find ways to promote women’s human rights without contributing to war propaganda. Second, pointing fingers at “Them” blinds “Us” to ways in which our own institutions and policies also perpetuate harmful gendered practices. Too often the media spotlight on barbaric foreigners closes the space for feminist activists on the home front to press for greater gender equity at home. And simplistic narratives of bad men oppressing women in foreign lands obscure the complexity of these practices – which implicate and affect men as well as women – and too often substitute for exploring efforts at change. 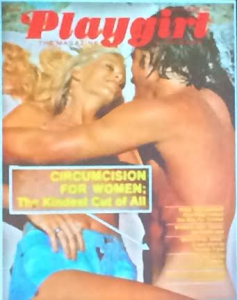 In the case of genital cutting, for example, consider some actual facts: Even though ISIS is apparently not going to be forcibly circumcising girls and women in Iraq, millions of girls do face non therapeutic genital cutting in the Mideast/Africa / Southeast Asia.  Female circumcision as practiced in the US as recently as the 1970s: Playgirl magazine promoted it in 1973, and Blue Cross Blue Shield covered the procedure until 1977. The US no longer tolerated circumcision of girls, but baby boys are still cut primarily for cultural reasons in the US – as well as Africa, Israel, Canada, Australia, much of the Muslim world and parts of Europe. Moreover, inter-sex children undergo involuntary genital surgeries in the name of gender ‘normalcy’.

None of this is consistent with human rights unless chosen voluntarily by consenting adults, according to the Genital Integrity movement, which is meeting this weekend for its Bi-ennial Symposium in Boulder, CO.  I have been attending this meeting to present research findings from my recently published book project and can attest to the inspiringly multi-vocal and genuine efforts here to eradicate all forms of genital cutting – in a way that engages, respects and builds bridges to communities who engage in it, with fortitude and compassion, rather than demonizing.

I am sadly (though unsurprisingly) seeing little media attention to this movement, which I chronicled in my new book ‘Lost’ Causes, or to the complexity of the issues it addresses, equivalent to the hype over ISIS this week. It is surely easier to deploy faux-feminist tropes to denigrate enemies than it is to do the kind of challenging grassroots work required to create genuine cultural change around these practices. Yet I hope all those who expressed shock at alleged genital cutting of girls, by a group whose behavior we rightly abhor, will pay equal attention to actual cutting of children – of all sexes – even by good people who honestly believe they are protecting their children. And I hope concerned parties will support global efforts to change these practices – even when this week’s anti-ISIS sensationalism has dropped from the headlines.

In Search of a New Warrior Ethos