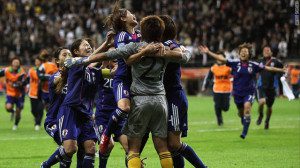 Germany won the Men’s World Cup. The other half of the tournament takes place next year, in Canada.

Calling the men’s half of the tournament ‘The’ World Cup while excluding half the world’s population including some of the best players in the world is really nothing more than gendered language at its sexist best.

At Huffington Post last week, Jezebel‘s Valerie Alexander penned a terrific piece on why this semantic distinction is so important:

I don’t want to take anything away from what Landon Donovan has achieved. But every time he sits there, silently allowing that phrase to be rattled off — ‘all-time leading U.S. goal scorer’ — without pointing out that he is the all-time leading men’s goal scorer, it does take away from what Abby Wambach and Mia Hamm have achieved — total world domination. It would be great if he displayed some of the dignity and grace we know he possesses and say, ‘All-time leading men’s scorer. There are seven U.S. women higher on the list than me.’

For US futbol fans, issues to keep an eye on in the run-up to the Women’ World Cup include whether the players will be forced to play on artificial turf (especially a problem for US record national goal-scorer Abby Wambach, who tends to use the earth to her advantage); the impact of the competition on American sport nationalism; and whether removing one’s shirt in victory meets FIFA codes of conduct when you’re female (no, really). Also maybe, just maybe, the media will cover questions about gender balance at FIFA. Stay tuned.

Non-Academic Job Searches in DC – What to Know