In Search of a New Warrior Ethos 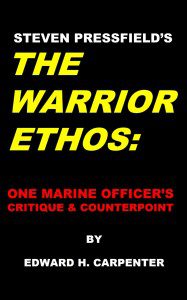 It’s not often that a Marine officer writes a book that goes head-to-head with a title currently listed as “Commandant’s Choice” book by the Marine Corps, but in this case, I had little choice but to lay down the sword and take up the pen in order to debunk the honor-bound, shame-based relic of dead cultures espoused by Steven Pressfield’s 2011 monograph, which the current Commandant has made mandatory reading for all Marines.

Unfortunately, Pressfield’s book is a rambling mixture of Laconophiliac hero worship, Eastern mysticism, and pop psychology, and the “Warrior Ethos” it proposes is more suited for the Bronze Age than the Information Age.

My new book is now available in paperback and Kindle formats, and has been critically reviewed at Battles and Book Reviews and on War Is Boring. Written during my last tour to Afghanistan, it attempts to provide better answers to the questions posed by Pressfield in his earlier work:

1) Is a sense of honor part of our genetic makeup?
2) What does honor consist of in the modern age?
3) What is the Warrior Ethos?
4) Do we fight by a code?

Pressfield fumbled the ball on his responses, for example, when he claimed that;

The American brand of honor is inculcated on the football field, in the locker room and in the street. Back down to no one, avenge every insult, never show fear, never display weakness, play hurt.

That’s a terrible version of honor, one that if followed by our military members would lead to barroom brawls, vengeance-based massacres like Haditha, reckless behavior on the battlefield, and unsuccessful attempts to suppress PTSD and other ailments. A better definition of honor wouldn’t require us to take an eye for an eye, to commit suicide if we let down our comrades or superiors, or compel us to face our enemies in a “fair fight”. It would also avoid one of the odd dichotomies of traditional honor codes, as explained by James Bowman in Honor: A History. He writes that honor has normally been defined as “bravery, indomitability and the readiness to avenge insults or injuries for men, and as chastity for women.”

The book also raises topics for future discussion, such as the fact that existing codified rules for warriors, from the NATO Rules of Engagement to the Taliban’s Layeha don’t give fighters the ability to “opt out” of wars that they believe are unjust, or to refuse to use tactics that are not in keeping with a reasonable person’s interpretation of the principles of jus in bello, without finding themselves kicked out of their military organizations, charged as criminals, or worse.

I’ll be addressing many of these issues in greater detail through future posts, as well as discussing the critical question of who can really claim the title of warrior in the modern age.

If your curiosity is piqued, you can read a longer excerpt here (debunking the dubious utility of tribalism as the basis for a modern Warrior Ethos) or just grab a copy in paperback or on Kindle.

Read the book? Got questions, critiques, or commentary? Feel free to address them here – I’ll be happy to respond to you in the comments.

If Gaza Isn’t a Genocide, What Is?: discourse as resistance