This is a guest post by Ari Kohen, Associate Professor of Political Science at University of Nebraska-Lincoln.  He blogs at Running Chicken and tweets @kohenari. 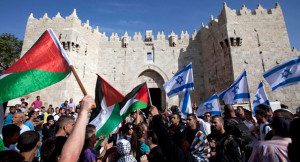 As I write this, Twitter and Facebook inform me that air raid sirens are going off in Jerusalem and Tel Aviv, as well as several cities and towns closer to the Gaza Strip, while Israeli forces have launched air strikes against Gaza and are considering the mobilization of as many as 40,000 reservists for a possible ground incursion. The numbers of dead, wounded, and terrorized are mounting.

This most recent escalation comes on the heels of the kidnapping and murder of three Israeli teens in the West Bank, and also the official and unofficial retaliation by both the Israeli government and a small group of Jewish extremists. But while this is the proximate cause, the truth is that this week’s bloodshed and terror is rooted in the simmering hatred, prejudice, and distrust that has characterized the peace process almost since its inception.

While leaders have in the past at least made a pretense of working toward the goals set out way back in the 1990s, the Israeli government under Netanyahu and the deeply-divided Palestinian leadership have both made clear their unwillingness to compromise. Decades of occupation, radicalism, and foot-dragging have brought us to the point where leaders and citizens now find themselves, committed to verbally endorsing a peace process that has no chance of ever turning into actual peace. At the very least, peace would require an end to – rather than the continued expansion of – Israeli settlements in the West Bank, just as it would require Hamas and its supporters to unequivocally give up on the dream of a map of the region that doesn’t include Israel. But peace would also require giving up on the idea that justice is bound up with affixing blame and with retaliation, giving up on the whole ridiculous notion that everything will be sorted out properly once everyone finally understands whose fault it all really is. And this is where we might have the most trouble of all, because partisans of one side or the other persist in proclaiming the obvious justice of their cause and the utter inhumanity of the other. Even as I write this, I’m well aware that I’ll be called a Zionist apologist and warmonger because I haven’t properly situated all of the violence within the proper context of Israel’s colonialist and militarist oppression of the Palestinian people. And, just as certain, I’ll be called a self-hating Jew or a hopeless relativist because I’m blaming Israel for defending herself against those who seek her utter destruction and drawing false equivalencies between the generally good Israelis and the generally evil Palestinians.

“It’s too bad what happened to those Jewish boys, but they shouldn’t even have been in Palestine in the first place; what happened is the end result of the Israeli occupation and the treatment of Palestinians.”

Would it help if the Israelis stopped building in the West Bank and reached an agreement about the borders of an independent Palestinian state? Of course it would. And would it help if Hamas stopped shooting rockets at Israel and gave up on the idea that Israel might some day vanish from the face of the Earth? Absolutely. But it’s also necessary for everyone who feels connected to this conflict to turn away from the fiction of the purity of one’s own cause and the historical blame game that goes hand in hand with it. Because until it’s less important to point fingers at the people responsible for the previous atrocity than it is to ensure that there is no next atrocity, we’ll just keep perpetuating the same violence we’ve seen for decades.