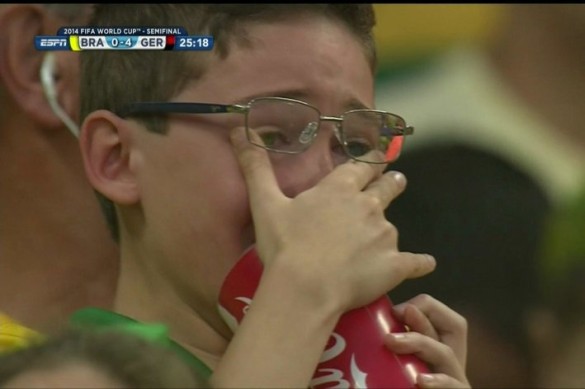 This might be might last football related post, what with the World Cup coming to a close and host country Brazil departing ignominiously from the competition by a margin of 7 to 1 in the semifinal against Germany. I’ve got a few football/Brazil related links for this week. I’m sitting on a goodly number of climate change and conservation related themes that I’ll come back to in coming weeks.

I’m also aiming to write about restive criticism of President Obama’s foreign policy, both by the usual suspects as well as some more unlikely folks like Peter Beinart. I’ll leave that to a later post. In the meantime, what does Brazil’s loss mean for Dilma Rousseff’s re-election prospects? Why is that almost all the Brazil fans at the games appear to be white? Brazil’s got a ton of water but Sao Paulo doesn’t, what gives? At the end of the day, this is just a game, and with the deterioration of the situation in Israel, among other calamities, there are certainly some bigger issues looming. Will Brazil’s crash out of the World Cup have any political implications? The national mood has changed remarkably with some isolated stories of outbursts and reactions to yesterday’s loss. This Slate piece is a bit pedestrian but is a first effort to try to come to grips with the implications.

If Brazil had won the tournament, it could have changed the political significance of the entire event. If the country had made a dignified exit in the late rounds, it probably wouldn’t have had that much of an impact either way. But a defeat this humiliating is going to remind a lot of voters of why they were upset about the World Cup in the first place. Anti-Dilma chants were reportedly already being heard at the stadium today.

Remember, if the Netherlands beat Argentina this afternoon (the game is in extra time now), Brazil will have to face its arch-rival and nemesis in the third place game without star player Neymar and after the cataclysmic loss to Germany. If Argentina wins today (and goes on to win the tournament), that’s potentially even worse! On the anti-Dilma chants, some have noted that they were obscene. We witnessed these political chants at the Curitiba first round match between Iran and Nigeria which was mostly populated by locals having a nice day out. Midway through the first half, some guys started singing some anti-Dilma attacks. His neighbor smacked him and there was almost a brawl in the stands. Political antagonisms could quickly bubble up in the wake of the games. As one Brazilian political scientist noted:

Partisans on both sides have a clear reason to fight over how the World Cup is interpreted.

At the very least, Brazil’s heartbreaking loss is reminding people of the expense of the stadiums and whether the investments were worth it. Until Brazil’s loss yesterday, most of the energy of the protests that had burbled up in last year’s Confederations Cup and in the lead up to the World Cup had ebbed. This was the scene last week:

Instead of the civil unrest that loomed as a wave of strikes gripped Brazilian cities in the weeks before the event, the images being beamed around the world are like those at Circo Voador: smiling fans, happy foreigners, soccer and beer.

Maybe people will just move on and life will return to normal as this woman below suggests, but there may be more subterranean effects on politics that will emerge in the fall.

“Where Brazil won or not, my life will be the same,” Salles said, embracing her new boyfriend, Diogo Alves de Oliveira, 22, an administrative assistant.

Logistics and Infrastructure The logistics for the World Cup have gone about as well as could be anticipated, despite unfinished infrastructure. Flyover collapse in Belo Horizonte a reminder that some construction was done last minute and perhaps not to exacting standards. We saw this with the Belo Horizonte airport and road construction in all hands on deck mode a week before the Cup:

Sure, it was cool to have the World Cup back and with it the chance to finally win it on their home soil. But they have known for some time that once this World Cup is over, the billions spent on it will haunt this country’s ability to develop. Some of the stadiums will be used and some will not. And the improvements to infrastructure that were promised — but never fulfilled — remain a pipe dream. The schools, the hospitals, the transit network badly in need of an upgrade — they’ll have to wait, at least until all the bills are paid and until this tournament and the 2016 Summer Games in Rio de Janeiro have come and gone. FIFA and the International Olympic Committee will be feasting on some other people’s naiveté by then.

That’s particularly striking in Brazil, with its highly mixed population that has more blacks than any country with the exception of Nigeria. More than half of Brazil’s population self-identified themselves as black or of mixed-race in the 2010 census.

A Datafolha polling group survey published in the Folha de S. Paulo newspaper showed that at Saturday’s Brazil versus Chile match, 67 percent of attendees classified themselves as white and 90 percent came from Brazil’s top two economic classes, which represent about 15 percent of the country’s population.

Obama’s New Landmine Policy: Change I Can Believe In, Tentatively