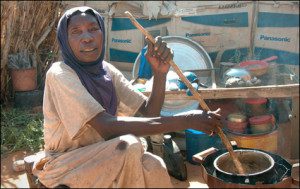 Samer Abdelnour and Akbar Saeed have published a terrific article in International Political Sociology. “Technologizing Humanitarian Space: Darfur Advocacy and the Rape-Stove Panacea” critically traces the emergence of fuel-efficient cook-stoves as a global “solution” to sexual violence in refugee camps.

We examine how an unassuming domestic technology—the fuel-efficient stove—came to be construed as an effective tool for reducing sexual violence globally. Highlighting the process of problematization, the linking of problems with actionable solutions, we show how US-based humanitarian advocacy organizations drew upon spatial, gender, perpetrator, racial, and interventionist representations to advance the notion that “stoves reduce rape” in Darfur. Though their effectiveness in Darfur remains questionable, efficient stoves were consequently adopted as a universal technical panacea for sexual violence in any conflict or refugee camp context. By examining the emergence and global diffusion of the rape-stove problematization, our study documents an important example of the technologizing of humanitarian space. We postulate fuel-efficient stoves to be a technology of Othering able to simplify, combine, decontextualize, and transform problematizations from their originating contexts elsewhere. When humanitarian advocates construe immensely complex crises as “manageable problems,” the promotion of simple technical panaceas may inadvertently increase the burden of poverty for user-beneficiaries and silence the voices of those they claim to champion and serve.

I remember teaching about the firewood/rape nexus in refugee settings during my days at GSPIA, but I was not aware of how the technology had proliferated since then or of many of the pernicious side effects of this technocratic solution to a multi-dimensional problem (here is an op-ed version by Abdelnour). It was nice to read a detailed critical assessment of such a policy, and to think about how many other globalized practices are doing more harm than good (or maybe some good and some harm) in places where well-meaning agents are struggling to deal with so much nastiness. Fuel-efficient cook-stoves to reduce rape are a band-aid, but so are refugee settings themselves: technocratic efforts to cordon off nastiness from vulnerable populations, and cordon off vulnerable populations from their host societies. The takeaway is that looking below the rug of humanitarian policy leads to some pessimistic conclusions.

One question I was left with at a theoretical level was the authors’ use of the term “problematization.” They use it somewhat differently than the literature in which I work, which sees problematization broadly as the process by which social conditions get politically constructed as global social problems. Abdelnour and Saeed mean something different: “the process of linking problems with actionable solutions.”

Semantics aside, this is an important concept, and something my research team and I heard a lot in conducting focus group research on how global advocacy organizations pick issues. The ability to package a problem with a solution – an issue’s “solvability” – is an important ingredient in the recipe for global attention to issues. Thus the rape-stove panacea might have been less about solving rape per se but about rendering rape solvable and thereby heightening the salience of sexual violence as a global policy concern.

Meanwhile in Cambodia: The Detention of Mu Sochua