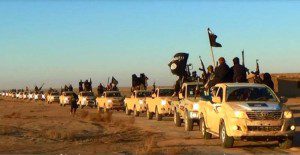 As I wrote a few days ago, a new pattern of warfare is emerging in the Middle East and Africa. This “new blitzkrieg” isn’t really new, but it is asymmetric warfare at its best, pitting swarms of fast-moving, lightly armed fighters operating as a network against hidebound hierarchies of Western-trained and equipped “professional soldiers”. These state forces have a bad track record of crumbling under the tempo of swarming, networked attackers; and the only thing that has proven capable of stemming the tide is early airstrikes followed with a robust military “prop-up and mop-up” campaign, as demonstrated by French and African Union forces in Mali. The outcomes aren’t that great in any of the recent cases – but it’s much, much worse when any regional government has fallen to the non-state forces.

So, what does it all mean?

First, it suggests that the international community needs to agree on a framework for regional interventions, and this framework should address the following strategic and operational truths:

Second, it means that with such an international framework in place, there will be a need for responsive forces that maximize air-to-ground combat power, aerial reconnaissance, transport, and refueling, along with light, mobile armored vehicles and mechanized/air mobile infantry, engineers, and military police – and that a key component to these forces will be multi-lingual personnel who both understand regional cultures and are able to work well with a range of military partners – host nation and supporting regional forces.

Third, it raises the question of why Africa, which lags the Middle East considerably in per capita income, is far ahead when it comes to organizing regional military responses to regional crises. African Union states have often provided the direct support of regular forces (vice indirect support in guns, money, and fighters) in response to regional conflicts, unlike their counterparts in the Arab League and Gulf Cooperation Council. Although the African record is far from perfect, it is better, and the key difference is in the use of regular units vice the support of networks.

Finally, it opens the door for increased cooperation between historic competitors in the international security arena. By agreeing to weigh in on the side of states, regardless of their liberal policies (or lack thereof) it is likely that such a plan could gain the concurrence by China and Russia required to enact a standing Security Council Resolution. These major players oppose (on principal) ad-hoc interventions intended to topple existing autocratic governments, but might be more supportive of a norm to ensure regional stability by supporting states, regardless of their internal political structures.

A litmus test for this would obviously be how such a framework would have worked in the case of Ukraine, a state in turmoil which is not located in the Middle East or Africa, but instead right on the doorsteps of both Russia and Europe. I would posit that, in fact, the “trigger threshold” would never have been met in Ukraine, due to the relatively peaceful nature of both the overthrow of the Yanukovych government and the resulting Crimean referendum to break away from Ukraine and re-enter the Russian Federation. With regards to the ongoing military crisis in Eastern Ukraine, this would probably not cross the threshold due to the static nature of the conflict (which is more a case of separatism than governmental overthrow) and the presence of diplomatic avenues for resolution, which are non-existent between ISIS and the Iraqi government.

So, that’s the opinion of one old Cold Warrior turned Long Warrior… What do you think?