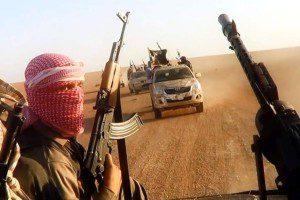 A new version of maneuver warfare is being utilized mainly by Islamic fundamentalist forces to seize territory from government forces trained, equipped and organized along the Western model.

This “new blitzkrieg” relies on lightly armed fighters mounted on “technicals” – 4×4 trucks with heavy machine-guns, light cannons, or automatic grenade launchers mounted on the vehicle. Here are some key factors we should be thinking about in order to potentially combat these forces in the future.

What does all this mean? That will be the subject of another post, but for now, I’d be interested to hear your thoughts in the comments.

It should be clear, though, that the “new blitzkrieg” is here to stay, until its effectiveness can be disproved to those forces that will otherwise choose to use it. In fact, we should not discount the probability that well-funded organizations like ISIS will be able to improve upon the model by adopting the use of light civilian aircraft modified to drop barrel bombs and serve as aerial gunnery platforms, or deployed in a kamikaze role against fortified positions or key infrastructure.

An Open Letter from the New DGS