The Politics of the Human Security Agenda 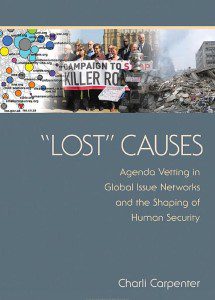 Just in time for you to head to the beach with a copy, my new book is now available from Cornell University Press.* As many of you know, this is the culmination of a my 6-year NSF-funded research project on why some human security problems get on the global agenda and others don’t. The answer in a nutshell: it’s all about what’s going on within the advocacy networks. A teaser of the first chapter is here. A nice write-up by the Chronicle of Higher Education is here.

The book includes a longer version of the argument in this article, and three case studies on human security campaigns that I’ve followed and occasionally written about at the Duck – causes long championed by norm entrepreneurs but varying in their ability to gain traction on the global agenda:

Each of these cases illustrates the broader argument: that norm entrepreneurs must market their causes through human security “hubs” in order to succeed, and that their chances of doing so depend on social ties between actors, issues and subcultures within global issue networks. But each also tells a fascinating story of social change agents on the global front-lines, and the work they do each day to make our world a better place, often against great odds.

The chapter that may interest Duck readers the most is the methodologies appendix where I talk about the challenges of studying transnational spaces and detail the epistemological choices I made hanging out on the theory/policy divide. Therein, I explicitly take on Patrick Thaddeus Jackson’s typology of social science approaches and advocate a position on epistemological thresholds. Check it out, and let me know what you think.