About two weeks ago I had pledged to go on blogging hiatus in order to vacation with my family, a pledge I only broke once so far. However, while traveling south from Durango, CO with my partner and son last week, I ran across this post by LGM’s Erik Loomis,’ on the treatment of Central American refugees in US facilities north of the Mexican border. I also read the entire linked document by Wendy Cervantes, an Immigration and Child Rights expert First Focus – one of several NGOs who were permitted to tour the facility in Artesia, New Mexico, the previous week. I also found other sources on the subject including this, this, this, and this. 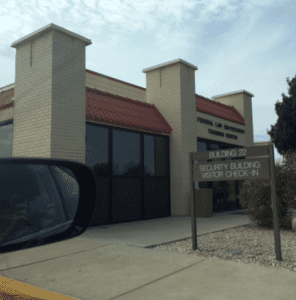 All these articles point to overcrowding and the absence of adequate medical care and legal representation for these families, as well as the wider problem of what international lawyers call “refoulement” – forcible return of asylum seekers who likely face persecution or violence in their home country. This is of course a violation of the Refugees Convention, which requires governments to accept and aid individuals fleeing their country due to a well-founded fear of persecution should they return; and which prohibits them from forcibly returning such people or prosecuting them as illegal immigrants.*

Our route by car from Albuquerque to Roswell / Carlsbad took us directly past Artesia. It seemed wrong to carry on cavorting through limestone caves and UFO museums knowing we were driving right by a facility where refugee women and children were being held, allegedly without adequate supplies. So we decided to make a brief detour and see what would happen if we drove up to the base asking questions and offering help. Our primary objective was to obtain an audience with someone, anyone, in a position to receive feedback from some concerned citizens about the fate of the refugees.

It took some internet research to figure out how to get there. The facility in Artesia is actually a converted law enforcement training center not far off the highway. Wendy Cervantes’ article specifically referred to woman who had to beg for 24 hours before getting a diaper for her daughter, so we elected to pick up diapers to bring with us: a jumbo pack in each size. And for effect, at my son’s suggestion, we pulled up to the gate playing “A Lannister Always Pays His Debts” on our SUV speakers.

The gate guard directed us to the “security checkpoint for visitors.” Inside we were received by two FLETC staffers who told us (quite predictably) that we could not enter the base nor did they have any information on what was happening inside – that was all run by Immigration and Customs Enforcement (ICE). Though they couldn’t vouch for what was happening under ICE-controlled portions of the base, they did insist this was definitely “not a detention center” and bristled when I used the term. (They preferred ‘residential facility.’) We asked how we might deliver diapers to these children, having read in the media that there was a diaper shortage. We were informed that all donations by private citizens must be handled by the Chamber of Commerce and we were strongly encouraged to leave the base and take our diapers there. We asked if the Chamber of Commerce had access to the refugees and would be able to provide information to us about the distribution of supplies, as it was clear that a system was in place for private donations yet we had heard stories of under-supplied families. No, the Chamber of Commerce staff could not enter the facility – only ICE officials. Which ICE official could we be directed to with questions about the conditions in the facility? None were available. But we could use the telephone outside to call inside the complex and speak with ICE.

If you politely refuse to go away as requested, a security supervisor will generally be called in to deal with your questions, even if you are originally told none is available. The officer who came to speak with us, also a FLETC official, stated that we could not in fact use the phone to talk to ICE, as the phone was only for lawyers – and not just for any lawyers, only those “vetted by ICE.” He did say that he himself interacted with the families inside the compound every day and that the media claims were “unfounded,” though he declined to review the news stories I had brought with me in order to address specific allegations. For about 30 minutes we stood there going in circles with him, smiling and gently asking him to explain the things we were reading, assure us that the refugees would be treated humanely, explain why mothers and babies were being kept locked away in the first place, and inform us as to how we could navigate the institutional architecture in order to do what we could to help these families, who under no circumstances (we argued) should be returned to the horrors they were fleeing given US obligations under the Refugee Convention. In turn he patiently refused to answer specific questions, insisting we were not entitled to such answers, and kept politely asking if there was anything else he could help us with.

Eventually, when it seemed we had exhausted the conversation, we retreated. I thanked the officials for their time and helpfulness in directing us to the Chamber of Commerce, as well as for offering my son a civics lesson in how the US Executive Branch worked. Our next stop was the Chamber of Commerce where we delivered our cargo of diapers. The woman there reported that the ICE came twice a week to pick up supplies (a huge pile of donated items awaited pick-up). She had not herself seen the inside of the facility but heard conditions were reasonably good, aside from overcrowding, and in particular that every child who arrived there “received a toy.” She mentioned that there was considerable backlash from locals for the US receiving the families at all, but that in her book, “These are human beings.” We agreed with her heartily and left a number for her boss to call with any further information; then resumed our trip south.

I have not yet heard from the Artesia Chamber of Commerce but will be following up this week. Since we passed through, we have read news stories of a chicken pox outbreak at the facility which has presumably halted deportations temporarily.  Meanwhile Republican lawmakers have gutted a bill that would have supplied emergency funding to support the border patrol in supporting these families and processing asylum claims.

My 12-year-old son chose to observe rather than participate during our interactions with authorities at the base, but after we left I asked him what he would have said to the officer had he felt comfortable speaking up. He replied, “I’d have told him he was incorrect in saying we had no right to question our government, based on what I’ve learned in sixth grade civics.” As our drive south continued, my son, partner and I talked about the additional lessons in US Civics we drew from this experience.

What can concerned US citizens do to protect these refugees in situ and urge the government to streamline the asylum process? I would love to see more Americans in the region join demonstrations in support of these families, or visit these facilities to signal our support for them as refugees, refusing to go quietly away when we are directed to take our compassion elsewhere. In this way, we can communicate that we are watching and we care; and we can practice respectful dialogue with representatives of an executive branch that in some respects has become frighteningly unaccountable, and in others is hamstrung by lawmakers and needs our support and validation for the work it is trying to do.

Such acts of interested engagement will not solve the appropriations problem, or wider questions of where these asylum-seekers should go. They will not solve the root causes of the crisis. But they ensnare our civil servants and lawmakers in a series of moral conversations about our responsibility as a great power and ethic as an immigrant nation. They may not change outcomes, but they would hopefully impact the culture in which those outcomes are being produced. I can’t help but think this can make a difference at the margins.

For those outside the region or wishing to focus on the bigger picture: We Belong Together is circulating a petition urging President Obama to end the practice of detaining child refugees. I was told by FTELC officials that concerned citizens could call ICE’s “Detention Reporting and Information Line” at 1-888-351-4024. Let us do so, and insist that these families be treated as asylum-seekers and provided humane treatment and due process.

We can also speak out consistently in our neighborhoods and communities in favor of a compassionate approach to these families, and avoid shying away from attempting to persuade those who would argue otherwise. And we can contact our representatives to fund refugee relief and find solutions to assist these families. We can also contact lawmakers who might be in a position to listen, whether or not we live in their districts. For example, New Mexico Congressman Steve Pearce is touring the facility today and has previously expressed concern for the health of the families. Although he is unlikely to respond to US residents outside his jurisdiction, his office in Roswell can be reached at 1-855-4-PEARCE for information and additional communicative action.

Those who are following this issue more closely than I am while traveling: I hope you will leave other specific ideas for direct action on behalf of these families in comments.

*Economic migration per se is not covered by the Refugees Convention, but for those who think these families are here because of poverty rather than violence consider that equally impoverished Nicaraguans are not fleeing north, the key difference being low political violence in Nicaragua but high violence in places like Honduras and Mexico.

**“Give me your tired, your poor, Your huddled masses yearning to breathe free, The wretched refuse of your teeming shore. Send these, the homeless, tempest-tossed, to me: I lift my lamp beside the golden door.” – Emma Lazarus