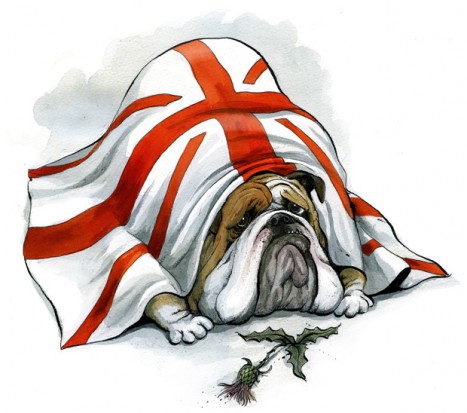 [Note: This is a guest post by David M. McCourt, an assistant professor in the Department of Sociology at the University of California-Davis. His book, Britain and World Power Since 1945: Constructing a Nation’s Role in International Politics, has just been published by University of Michigan Press.]

On Thursday the Scottish people will go to the polls to vote on independence from the United Kingdom, with the prospect of a “yes” vote more realistic than many believed only a few weeks ago. This raises important questions for Britain’s role in the world, and by extension for the future of NATO, the UN and the European Union as well. Without Scotland, would “rest of the UK” or “rump UK” (rUK in either case) continue to play the prominent role on the global stage Britain has since the end of the Second World War? Or would a chastened and meeker rUK exit international affairs stage left?

I argue that rUK foreign policy would display far more continuity than change. This follows from a theoretical claim: that state action in world politics is driven more by social expectations coming from the international sphere than by factors internal to states—be they identities, preferences, the national interest, or whatever. These expectations take the form of social roles: predominant understandings of a state’s place in the world, communicated and negotiated in interaction with others in international politics. Put simply, although Britain will be a different actor should Scotland secede, others on the world stage will still be the same, and will expect rUK to play Britain’s traditional role. Crucial here are France and the United States. Both have propped up Britain’s global role: France because it has tried to play a similarly robust role, the US because it has needed a junior partner.

For its part, France shows no sign of wanting to play a lesser role in international affairs, as recent interventions in Mali and the Central African Republic have demonstrated. This is underpinned up by a strong military industrial infrastructure and similarly expansive sense of a French civilizing mission in the world to the British (la Francophonie, etc.). France and Britain are also currently engaged in a number of defence and security cooperation agreements, like the development of a Combined Joint Expeditionary Force and joint nuclear weapons testing, and a mooted plan for the UK to use a French aircraft carrier should Britain need one (say in the South Atlantic) before its two new aircraft carriers become operational in 2020. Unless French leaders become convinced rUK has committed itself to a reduced role in the world, it would seem sensible to assume that France will still expect Britain to play a prominent role alongside itself.

The United States too is unlikely to begin casting Britain into a reduced role in the world. President Obama’s suggestion that London and Edinburgh try to patch things up rather than break up is itself an alter-casting act: Britain, for Washington, is stronger with Scotland than without it. After independence, the United States will also still hope for rUK’s active military presence around the world, as joint statements aimed at ISIS at this week’s NATO summit in Cardiff, Wales, made clear.

You guys will still treat us the same, right?

This is not to say, of course, that domestic forces won’t play a part in how rUK’s foreign policy develops. They will. Numerous groups and institutions in Britain have a vested interest in a prominent foreign policy: the City of London, the armed forces, the defense establishment, and think tanks like the Royal Institute for International Affairs at Chatham House and the Royal United Services Institute. Domestic factors of all sorts will be important, therefore, and not only in favor of a continued prominent international role but also against it. In the case of Britain’s membership of the European Union—a key aspect of its international position—for example, there is a strong domestic movement for a withdrawal, which might have a large impact on Britain’s role in the world. The expectation that rUK maintain a prominent role would not therefore determine its foreign policy.

Nonetheless, taking a role-based perspective gets us away from a traditional but problematic starting point in IR: that what states do is driven entirely from within, here that rUK’s role in the world will be defined by what role rUK elites want to play in the world. As much as we would all like to, we can’t define the social roles we play. Since many of the same pressures now felt by UK policy-makers when they step on to the international stage will still be felt by their rUK successors should the Scots decide to leave, rUK will likely maintain a prominent international orientation without Scotland.