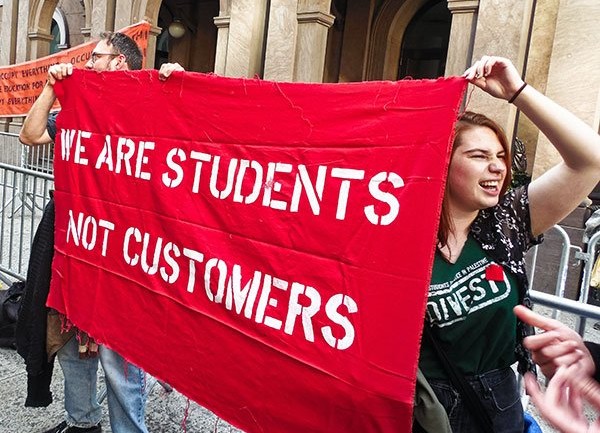 Josh’s post on his experience with course evaluations has gotten me thinking about the practice of using course evaluations. Because my personal circumstances differ from Josh’s (e.g. I do not have children), I have been able to avoid some of the painful tradeoffs he discusses and have not yet had to confront ‘bad’ evaluations. Reading his post, however, prompted me to connect some dots that have been floating around in my head regarding the ideological underpinnings of practices in the academy with recent pieces I have seen in the media—specifically a NYTimes report on the release of the follow-up to Academically Adrift and a report in the Economist on the upward march of grade inflation.

I assume the original intention of course evaluations was a reasonable one. Professors spend most if not all of their time in the classroom unsupervised, and course evaluations provide a basic mechanism for administrators to make sure faculty are doing their jobs. They also, for reflective teachers like Josh, provide valuable feedback for refining pedagogical approaches and techniques. Today, however, they have come to serve a different purpose. Evaluations have become part of a broader shift within universities as they increasingly adopt neoliberal economic norms. This includes conceiving of students as customers and universities as job training centers. In this context, course evaluations become less about improving pedagogy and more about ensuring the customers are satisfied. But, as Aspiring Adults Adrift—the follow up to Academically Adrift—demonstrates, students are not well placed to assess the quality of their education. From the New York Times piece reviewing Aspiring Adults Adrift:

When asked during their senior year in 2009, three-quarters reported gaining high levels of critical thinking skills in college, despite strong C.L.A. [Collegiate Learning Assessment] evidence to the contrary. When asked again two years later, nearly half reported even higher levels of learning in college. This was true across the spectrum of students, including those who had struggled to find and keep good jobs.

Through diplomas, increasingly inflated grades and the drumbeat of college self-promotion, these students had been told they had received a great education. The fact that the typical student spent three times as much time socializing and recreating in college as studying and going to class didn’t change that belief. Nor did unsteady employment outcomes and, for the large majority of those surveyed, continued financial dependence on their parents.

This brings me to grade inflation. The Economist story only reports on the dynamic on Ivy League campuses, but where the Ivies go many others follow (exploding research productivity expectations for example). To me, these indicators connect to the neoliberalization of American universities. If universities are simply providing a service to customers, then happier customers produce greater revenues (higher enrollments) for departments, colleges, and universities. Course evaluations are the primary metric for establishing student satisfaction, and studies demonstrate that higher average course grades correlate with higher course evaluations. From a 2010 study in the Journal of Political Economy:

Student evaluations are positively correlated with contemporaneous professor value‐added [higher course grades] and negatively correlated with follow‐on student achievement [performance in subsequent courses]. That is, students appear to reward higher grades in the introductory course but punish professors who increase deep learning (introductory course professor value‐added in follow‐on courses). Since many U.S. colleges and universities use student evaluations as a measurement of teaching quality for academic promotion and tenure decisions, this latter finding draws into question the value and accuracy of this practice.

Even units supportive of faculty that seek to prioritize rigor over easy As will have a hard time holding the line as enrollments (and thus revenue) drop because students migrate to courses and majors where such rigor is lacking.

The solution is not to eliminate course evaluations. Used properly, as part of a holistic assessment of teaching, course evaluations provide an opportunity for students to provide feedback and for faculty to understand how they are connecting with their students. Instead, the solution lies ultimately with students. The neoliberalization of American universities is not going away. So it will be up to students to demand more of their universities—not in terms of climbing walls or campus Starbucks—but rather in terms of educational rigor. The problem, of course, is that students are the least well placed to recognize rigor. Ultimately, they will have to ask themselves: Did the course challenge me? Did it push me outside the bounds of my conventional thinking? Do I think (about issues and problems) differently? If so, students should take more classes with that professor and reflect those qualities on course evaluations. Students in the end will have to change the ‘rationalist’ cost-benefit calculations underpinning the system.

How does this come back to Josh’s experience? I do not know the particulars of why his students evaluated him as they did, but the dynamics I discuss above suggest that perhaps the evaluations really are not as bad as he thinks.

ISIS, Syria, the Rebels and the US-Led Coalition: What Governs Who?

Ready for the Weekend Quasi-Linkage: Are Political Scientists Useless?