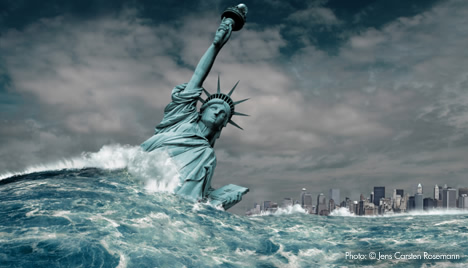 I hope she brought her SCUBA gear.

Once more unto the (climate) breach

I hope she brought her SCUBA gear.

I just happened upon a Foreign Policy piece from May 6 of this year framing climate change as a ‘Clear and Present Danger’. To summarize, the author argues that Obama’s plans to address climate change are a political non-starter in the US: Republicans are generally more opposed to carbon control policy than ever and the public is out to lunch on the subject. The solution, according to the author, is to invoke national security and get the military—a key Republican constituency—talking about how much climate change imperils national security. As a scholar of international security who does research on climate change (in collaboration with Janelle Knox-Hayes), my interest was immediately piqued.

Proponents of climate change policy in the US have turned to security as a political coping mechanism to overcome problems of public recalcitrance and structural roadblocks. I can see why framing climate change in security terms is appealing. Once an issue becomes a matter of security, dithering debate ceases and policymakers take action to head off the looming threat. Security, in other words, might help those concerned with climate change to marginalize obstructive forces within U.S. domestic politics. Bringing in the military adds credibility to the claim that climate change is an existential threat and engages an organization that has a reputation for effectiveness.

The military will save us

While efforts to use security as a basis for addressing climate change may be attractive, ultimately they are bound to fail. In large part the source of that failure traces to the incompatible natures of security and climate change. Security as a political dynamic functions best when the claimed problem is acute: a threat that will strike in days, months, or a few years. The reason security works best in acute situations is because a call to security is a call to action: security actors must act quickly and decisively to deal with the threat before it overwhelms the valuable thing that is being threatened. To do that, extraordinary costs (political, economic, social) and sacrifices to normal political operations (centralization of power, marginalization of debate, etc.) must be temporarily borne to facilitate rapid action. While that works well in the context of an invading army or a disease outbreak, it works much less well for problems like climate change where the problem is chronic. Some security threats can be sustained over the long term (e.g. in the U.S. the Soviet Union during the Cold War), but the threat needs periodic refreshing with acute crises (sticking with the Cold War in the American context: Korean War, Vietnam, various Latin American crises/invasions, Soviet invasion of Afghanistan, etc.). However, climate change does not have the same episodic acute crises that propped up the Cold War. Efforts to represent hurricanes or other major weather events as such acute crises is fraught with difficulties in no small part because they have existed for much if not all of human history, and it is therefore difficult to demonstrate unequivocally that Weather Event X derives directly from climate change.

Climate change or not? So hard to tell.

A related point comes back to the temporary nature of security: it is a time-delimited up-ending of normal political practices. The costs of security are borne both because the threat warrants those costs and because the prescribed measures to deal with the threat promise to produce a return to normality. Yet climate change demands nothing less than fundamental shift in the foundations of economic production and activity. That shift will touch every member of every society on the planet. That in turn requires a broad-based, sustainable political commitment by the public and policymakers. That is not something treating climate change as a security threat can produce, because it requires not short-term measures but fundamental changes that impose significant costs. There is no return to ‘normality’ in the offing, and thus no time horizon for the costs that must be endured. Treating climate change as a security issue might serve as a spark to action, but unless the long-term basis for policy has been prepared, climate policy will burn itself out long before it addresses the problem.

Finally, the need for climate change policy to touch on every aspect of economic activity suggests that the military is poorly placed to take the measures necessary to deal with climate change, a point Rita Floyd makes in her book on American environmental policy.

The inability of security to sustain climate change policy makes for the depressing realization that US action on climate change is likely to be frustrated for some time to come. The significance of this extends beyond the issue of climate change. In the musty pages of International Relations theory, classical realists have debated for some time whether democracy could survive the array of threats facing it. The end of the Cold War seemed to answer that question affirmatively, but the debate renews itself in the modern context. The difference is that now the challenges are internal, in the form of society’s relationship with the natural environment. Here, the failure of Americans to come to terms with climate change and reliance on the politics of security to try to do so (unlike their brethren in Europe or even apparently the Chinese) bodes poorly both for climate change policy as well as for other long term issues that require sustained political support (see, infrastructure redevelopment, immigration reform)

While framing climate change in security terms is not likely to produce sustainable policy, it is also not clear what if any alternative policy mechanisms U.S. political leaders possess to overcome the political obstruction and public apathy. Education may serve to change American public worldviews, but this is a gradual process and anyway science education in the U.S. is largely stagnant with the occasional regressive effort to degrade its quality. Continued European leadership on climate policy—particularly if it comes with economic benefits—may serve to prod the U.S. public and its political leaders to action through embarrassment at the loss of U.S. leadership credentials and envy of European economic gains. However, it may be that the world will have to wait until catastrophic weather events in the U.S. homeland lend sufficient external legitimacy to policy efforts to push them to success. Of course, by that point legislation would be too little, too late.

ISIS and Biological Weapons: Black Flag, But Not the Black Death

Human Rights Research and Researchers in IR: Are We REALLY that Odd?