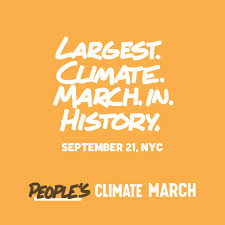 On Tuesday September 23, the United Nations Secretary General Ban Ki Moon is hosting a meeting of world leaders to discuss the issue of climate change. The aim is to build pressure and support for action in advance of the climate negotiations to be held in Paris in late 2015. In advance of Tuesday’s climate meeting, activists are holding on Sunday, September 21st the People’s Climate March, what aims to be the largest march of its kind with a core march in New York and satellite marches in major cities around the world. The hashtag #Climate2014 is capturing much of the news about the upcoming meeting and marches.

While the news in other spheres has been rather dire of late, activists I’ve talked to are optimistic that 2014 and 2015 may be the most propitious time for successful climate action in years. With the worst of the financial crisis behind us, there may be scope for real commitments and concerted action. There are dark clouds of course: emissions reached an unprecedented high last year and some key leaders, notably those from China and India, are skipping Tuesday’s meeting, but there is also hope. In this set of links, I try to provide some context for the renewed sense of anticipation for this meeting and 2015.

What’s at Stake Next Week?

It took a few years, but never before has U.S. domestic and international climate policy been so well aligned. And that too just in time for the final sprint to the Paris climate conference, where countries will seek to finalize a new climate deal to succeed the Copenhagen Accord after 2020.

Although a wide range of agreements may seem possible, the space for a viable deal remains quite limited, and failure is always a possibility. Still, the U.S. administration can maximize its chances of success by executing a strategy focused on securing the gains of the Copenhagen Accord and galvanizing new global action to meet the climate challenge.

Why Is There Optimism?

Actors are making important commitments individually and collectively in advance of the meeting. The action is not limited to states. We are also seeing commitments by businesses and cities. Some of the important ones are below:

Second Thoughts About the West's (Weak) Opposition to the Putin Doctrine