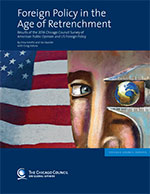 Today, the Chicago Council on Global Affairs (CCGA) released their biennial report of U.S. public attitudes on foreign policy, drawn from a large national sample carried out in May of this year. This year, my co-author Jon Monten and I participated in the team that designed the survey and analyzed the findings. [As an aside, we also have been working with CCGA to revive the leader surveys that CCGA administered for many years. Jordan Tama, Craig Kafura, Jon and I presented our first set of findings from the leader surveys at #APSAOnFire. We hope to release a report this fall with the data to follow.]

So, what are the most surprising findings? Well, per usual, Dan Drezner beat me to the punch and picked up on several them. He and I are in agreement about a number of them, particularly the dip in support for international engagement among Republicans, the high perception that the war in Afghanistan was not worth it, and robust support for free trade and globalization. We also include a survey experiment to see if public attitudes could, as in past surveys, be moved to support U.S. use of force if supported by multilateral endorsers, either a U.N. Security Council authorized mission or a coalition of allies. Interestingly, across a range of possible scenarios, that did not seem to matter.

Other findings are significant but less surprising, a majority, albeit diminished, percentage of Americans continue to support the United States taking an active part in the world. After a decade plus of war, Americans are weary of military intervention but willing to support drone strikes and targeted assassinations. These discrepant findings lead us to conclude that isolationism isn’t really the right word to describe U.S. public opinion.

Let me share a few of the graphics and findings from the report that I think tell the story of the surprising findings.

Afghanistan Was Not Worth It

Remember when President Obama campaigned saying that Afghanistan was the good and necessary war and Iraq was the wrong war of choice? Yeah, me neither. The American public has soured on Afghanistan big time. I tend to agree with Dan Drezner that most of the time the American public doesn’t care all that much about foreign policy and that they dislike wars without end.

Here, I would have thought that Americans would have turned against globalization after the 2008 financial crisis, but I think the lesson is that Americans see a more hopeful picture of international engagement through trade and commerce. Majorities also support lower trade barriers, either  with protections for workers (50%) or without (14%). (* with apologies to Steve and all Canadians for the use of Americans as shorthand for U.S. citizens).

This might be an artifact of question wording, but we included a long-running CCGA question to assess whether or not Americans supported sending U.S. troops in the event of different scenarios, such as a North Korean invasion of South Korea or if China invaded Taiwan. This year, we included a couple of topical scenarios including to enforce a peace agreement in Syria and if Russia invaded the rest of Ukraine. We also included an experimental component asking them if they supported a U.S. troop deployment with either (1) a “unilateral” condition or (2) as part of UN Security Council authorized mission or (3) with a coalition of allies.

As the figure below demonstrates, there are not strong differences across conditions, though there are huge differences between scenarios. While the survey was carried out prior to the separatist-felled plane crash in Ukraine and Russia’s subsequent incursions, there was low support for sending U.S. troops. Similarly, there was pretty low support for actions to enforce a peace agreement in Syria, though again this survey was taken before ISIL’s emergence and the spate of recent beheadings.

One potential confound, to be consistent with previous survey years, the default “unilateral” condition doesn’t say U.S. only so people might imagine that some scenarios would only be carried out with multilateral support. The scenarios were randomized for question order so we don’t think that is going on. There may be large differences at the partisan level worth examining. Because of length constraints, there are not a lot of questions about knowledge in the survey which might be revelatory if we think low information voters are especially moved by the effects of such cues.

In any event, these findings are pretty, especially in light of the high support for targeted assassinations (70%), air strikes on terrorist camps (71%), and drone strikes on suspected terrorists (62%).

One thing that is interesting is the malleability of public support for the use of force. With news of ISIL attacks on civilians in northern Iraq and beheadings of journalists, about 2/3 of the American public backed strikes on militants, even before Obama’s speech of last week. Part of this is a function of the tolerance for seemingly low-cost uses of force that don’t pose a risk to American lives. It’s unclear if larger political hay can ultimately be made about the blowback effects of drone strikes and concomitant civilians casualties, but I think there is a case to be made that absent a large threat, the American public would like to focus on business at home. Unfortunately, world affairs being as they are of late, that’s a luxury neither the U.S. public or President Obama can afford.

I’ll be posting more news and results from our leader surveys in short order.

Bad Advice on Making Academic Babies: opting in and out of heteronormative panic