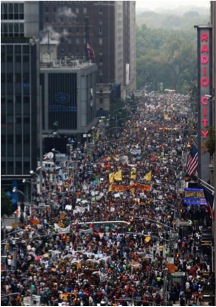 What’s Next for the Global Climate Movement?

This is a guest post from Jennifer Hadden, who is an assistant professor at the University of Maryland. She guest blogged on the Duck before on global climate negotiations. She also has a forthcoming book from Cambridge on climate advocacy called Networks in Contention: The Divisive Politics of Climate Change.

The largest climate change demonstration in history took place on Sunday. According to organizers of the People’s Climate March, an estimated 400,000 people participated in the protest in New York. For comparison, the size of the march was comparable to the scale of the February 15 anti-war demonstration in 2003. The demonstration at the Copenhagen Summit in 2009 mobilized about 100,000 people, but US demonstrations at that time generally mobilized fewer than 1,000 people. The People’s Climate March was also a transnational event: during the march a giant video screen outside Times Square projected images of demonstrations all over the world, totaling 2,808 events in 166 countries.

How does a protest on this scale come about? And what does it mean for the future of the global climate movement?

There are two particular strategic changes that help to explain the growth of the climate movement since 2009.

First, the movement has become substantially more diverse. A march of this size needs a lot of sponsors, and the People’s Climate March had over 1,500 organizations behind it. That’s a lot. Environmental groups were of course out in force. But the march was much more than that. People from low-lying areas in New York marched wearing orange life preservers. Labor representatives carried signs reading “climate change is a labor issue.” Religious leaders floated through the crowd on a wooden ark. Students marched wearing their university logos, carrying aloft a giant banner proclaiming “our future, our decision.” Anti-war groups made connections between militarism and CO2 emissions. Occupy supporters placed the blame on Wall Street and the financing of the fossil fuel industry. It’s hard to think of a constituency that was not represented (see the bloc line up below).

Second, Sunday was a massive show of strength for groups mobilizing under the “climate justice” banner. I document in my forthcoming book how this framing strategy contrasts with the “scientific urgency” approach traditionally favored by environmental groups. Organizations were divided over the use of the climate justice frame in 2009, but seem to have converged on this approach in the past five years. As one organizer from Friends of the Earth explained to me in 2013:

I think what happened in Copenhagen was that a lot of NGOs … were working for a long time with a frame that was very technical and demotivating for a lot of people. And it was really based on a theory of change that “if we change our governments, we can change the system.” Climate justice is much bigger than that. Climate justice helps us build the movement.

Climate justice framing has unified the movement and helped it grow.

What does this massive march mean for the future of the global climate movement? The official target of the protest was the Secretary General’s UN Climate Summit, which begins today (see good coverage and context here and here). But my sense from talking to organizers is that influencing this meeting was not the real goal. Most of the signs and slogans didn’t directly connect to the UN meeting. And despite rather dire news on the climate, much of the messaging of this march was optimistic and friendly (with the exception of the ominously-titled “We Know Who is Responsible” bloc).

So why bring 400,000 people to New York? In many ways, the climate movement is responding to shifting political opportunities. Once the Copenhagen Summit and the climate bill failed, many activists in the US began to believe that building a strong national movement capable of pushing action on multiple scales was the best course of action. US activists have almost entirely abandoned a strategy focused on Congress and the UNFCCC in favor of building social change “from the ground up.” Practically, this means putting a lot of effort into contesting energy projects like Keystone XL, coal-fired power plants, and fracking. It also means pushing for renewable energy at the state and local levels. More broadly, it means trying to create genuine normative change around the issue. As one activist explained to me, “the goal is to make coal the new cigarettes. We’re going to make it not ok to consume fossil fuels.” This new focus has made the movement less centralized, but also much bigger and broader.

This strategic shift makes a lot of sense. But creating broad-based social change takes a lot of time, which is a pretty big concern when it comes to climate change. As one organizer from 350.org put it in an email to supporters, “Organizing a big march is like throwing a rock in a pond: the splash is exciting, but the real beauty is in the ripples.” One of the main consequences of this massive mobilization may be the reinforcement of a collective identity for a large number of new participants. If that’s the case, this march may spur a variety of loosely coordinated actions on different political levels.  The question now is whether these ‘ripples’ will be big enough to create a tidal wave of pressure to protect the climate.

The Short-Termist Cost of Security

Bad Evals: Further Thoughts on Having it All