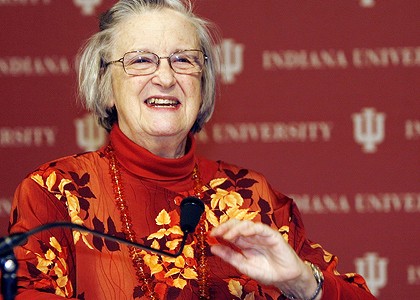 “and Elinor?”: when winning a Nobel Prize isn’t enough…

This is a guest post from Leslie Johns, an Assistant Professor of political science at UCLA.

The Public Choice Society—an academic organization of scholars who study the interaction of politics and economics—recently announced that it has created a new award for scholarly research: the Vincent and Elinor Ostrom Prize.  The announcement of this prize is provoking an intense reaction because of its name: “The Vincent and Elinor Ostrom Prize”?

Elinor Ostrom was well-known to political scientists, policy analysts, and economists.  As a graduate student during the 1960s in the Political Science Department at UCLA, where I work, Ostrom overcame tremendous odds and blatant discrimination to earn her Ph.D.  Her reward for this work was being offered a job as a secretary.  After decades of climbing the academic ladder and publishing path-breaking scholarship on the regulation of shared resources, it seemed as though Ostrom had finally been recognized for her courage and intellect.  Despite the fact that she never received a degree from or a faculty appointment in an economics department, Ostrom was awarded the Nobel Prize in Economics in 2009. She was the first, and remains the only, woman to win this prize.

When the Nobel Committee announced Ostrom’s award, many economists were surprised. Celebrity economists like Paul Krugman and Steven Levitt publicly acknowledged that they had never heard of Ostrom. A chorus of doubters quickly emerged to question the merit of the award, speculating that Ostromonly won the award because the committee felt pressure to give it to a woman and thus implying quite explicitly that her work was undeserving of the honor.

Ostrom’s research lies at the intersection of politics and economics, so it is not surprising to learn that many economists, like Krugman and Levitt, would not be familiar with her work.  But in light of the odds Ostrom overcame to work in our profession and the fact that many people discount her Nobel Prize because of her sex, it is deeply troubling that a prominent scholarly organization like the Public Choice Society chose to “honor” Ostrom by spotlighting her role…as the wife of Vincent Ostrom.  Putting her name second — “and Elinor” – makes the cut that much deeper by suggesting that this Nobel Laureate was not a pioneering mind but merely a plus-one.

Tweets of the Week #3

A Strategy of Appeasement: Winning the Revise and Resubmit