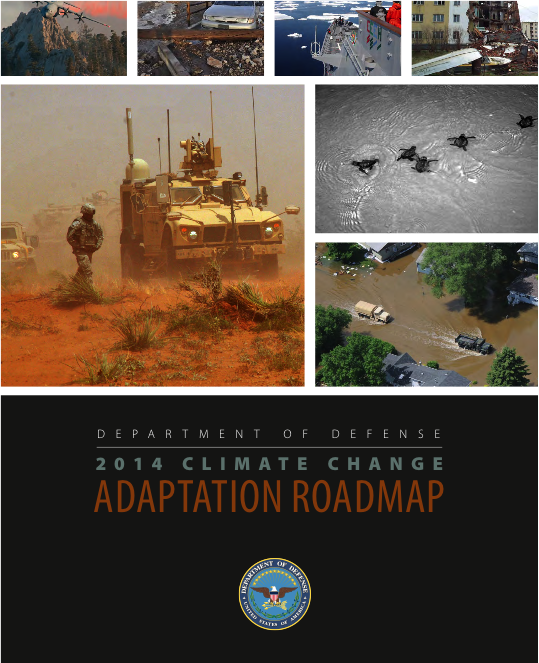 I made two presentations yesterday at Colorado College where I first talked about climate and security and then spoke about global climate governance. I’ll post about each issue in turn. With the Pentagon this week releasing its new strategy on climate change adaptation, this is a timely moment to revisit how far we have come with climate and security (slides from my presentation here).

Beginning with some think tank studies in 2007 and 2008 by the CNA Corporation, my own paper for the Council on Foreign Relations, and an edited volume from CNAS, the climate-security drumbeat began to accrue a constituency in policy circles in Washington and beyond. Governments began commissioning studies on the effects of climate change and security such as the 2008 National Intelligence Assessment on climate and security by the National Intelligence Council the CIA’s think tank (full disclosure: I was an external reviewer of that report) as well as reports and meetings by the the Defense Science Board, the National Academy of Sciences, the UN Security Council, the European Union, and various other governments. Climate change was soon being incorporated into U.S. Pentagon planning documents like the Quadrennial Defense Review (2010, 2014), and the U.S. issued strategic documents on the implications of climate change for the Navy and the Arctic.

In addition to the long-time work of the Woodrow Wilson Center’s Environmental Change and Security Program, there is newer policy community in Washington that works on climate change and security nearly full-time, prominent among them are Sherri Goodman at the CNA Corporation, Frank Femia and Caitlin Werrell at the Center for Climate and Security, Andrew Holland at the American Security Project, and Marcus King at George Washington University. There are regular meetings that focus on climate impacts and security. There are similar constituencies in other countries.

Climate and Security in Academia

As the policy world has taken on climate and security, the connections between climate change and security outcomes has become something of a cottage industry in academia, reviving the earlier debates of environmental security of the 1990s and early 2000s explored by the likes of Thomas Homer-Dixon, Marc Levy, and Colin Kahl (now national security adviser to Vice President Biden).

Indeed, the policy community has supported these academic efforts. For example, in 2009, the Pentagon invested in our initiative on Climate Change and African Political Stability (CCAPS), a $7.6 million five-year program under the Minerva Initiative which includes a number of prominent scholars of climate and security including Clionadh Raleigh, Idean Salehyan, and Cullen Hendrix. A group of us were recently awarded an extension on related work for South and Southeast Asia with $1.9 million over three years.

Unlike the earlier environmental security work that relied mostly on case studies, most of the newer work in this space has been quantitative, focusing on whether climate change is potentially linked to conflict onset, primarily civil wars. A broader literature in this field under the rubric of human security looks at a wider set of impacts on culture, migration, and human well-being.

The findings of the climate-conflict literature are somewhat mixed, with the debates becoming increasingly focused on model specification, differentiation of causal mechanisms assessing the effects of different kinds of climate-related hazards (too much rain, too little rain) on different kinds of conflict (civil wars, strikes, riots, protests), and a disaggregation to focus on sub-national geographic impacts. Most recently, there has been a shift from direct pathways between climate indicators and violence to more indirect pathways between climate-related phenomena and social conflict through such things as food price shocks. My PhD student and frequent collaborator Todd Smith has a new article (abstract only $) in the Journal of Peace Research takes up this theme.

The quantitative literature probably has some life left in it, but the debates have become a bit heated with “he said, she said” exchanges between research groups, most notably between Halvard Buhaug and collaborators at PRIO in Norway sounding off against Solomon Hsiang and his Berkeley collaborators, with Halvard taking the view that the many of the climate-conflict statistical correlations are not robust to model specification while Solomon has made broad claims that there is indeed strong correlational evidence linking climate change to conflict across a range of studies and kinds of conflict.

As I have argued before, I worry that there is a finding in need of a theory here and that the action in this space is on identifying specific causal mechanisms that connect climate indicators to security outcomes. (I have semi-reluctantly joined the fray by adding my name to a research note that Halvard has spearheaded which will appear in a forthcoming comment in Climatic Change where Solomon has a counter-reply.) Since 2004, I’ve also cautioned against this exclusive focus on climate and conflict rather than other security concerns that may be more proximate and likely such as humanitarian emergencies. Our mapping work on subnational climate security vulnerability, which has appeared in International Security, Climatic Change, and a forthcoming special issue of Political Geography, is intended to get at these wider consequences.

These academic debates have proceeded far enough that the IPCC in their 2014 Fifth Assessment Report included a whole chapter on Human Security, overseen by Neil Adger and Juan Pulhin, with Jon Barnett, Geoff Dabelko, and Marc Levy among the collaborators. That chapter included the wider optic on human security and captured the state of the collective academic wisdom on climate change and conflict, wisely in my view summarizing the evidence as follows:

Some of the factors that increase the risk of violent conflict within states are sensitive to climate change (medium agreement, medium evidence). The evidence on the effect of climate change and variability on violence is contested [12.5.1]. Although there is little agreement about direct causality, low per capita incomes, economic contraction, and inconsistent state institutions are associated with the incidence of violence [12.5.1]. These factors can be sensitive to climate change and variability. Poorly designed adaptation and mitigation strategies can increase the risk of violent conflict [12.5.2].

What does climate security mean for climate change advocacy?

I’m not sure all this policy work and academic work on climate security is what climate advocates had in mind when they sought to create a constituency of “climate hawks.” While there may be a wider cohort of people invested in the issue of climate change, it is unclear whether or not that translates into a more robust political commitment and coalition in support of mitigation of greenhouse gas emissions. The security framing now has a logic and constituency all its own. As the Pentagon’s roadmap on climate adaptation demonstrates, the policy community is focused on investments to prevent climate impacts from spilling over in to conflict and what investments need to be made to protect military and civilian infrastructure, supply chains, and transport logistics from being affected by climate change. All of those things cost money. Moreover, with a community of former generals and admirals leading the effort, what you might get is a more robust policy embrace of adaptation rather than mitigation with an emphasis on what the military needs to do to respond to this problem.

As Dan Deudney warned in a 1990 piece ($) in Millennium, when you securitize climate change, you have to be careful what you wish for, as security logics that allow you to jump up the queue of attention also have their own way of legitimating suspension of normal processes of policy adjustment and reinforce an emphasis on national self-interest, conflict, and bureaucratic ownership of the issue by defense establishments. While this is not unambiguously a bad thing, even adaptation, if done right, is largely a project of civilian agencies at home and abroad doing development, investing in disaster preparedness and risk reduction, climate-proofing of infrastructure. It remains to be seen if the climate security framing ends up being the boon advocates hoped for or more like the dog who caught the car he was chasing. Now what?

Cyber Letters of Marque and Reprisal: "Hacking Back"

Under Review: Cite This!