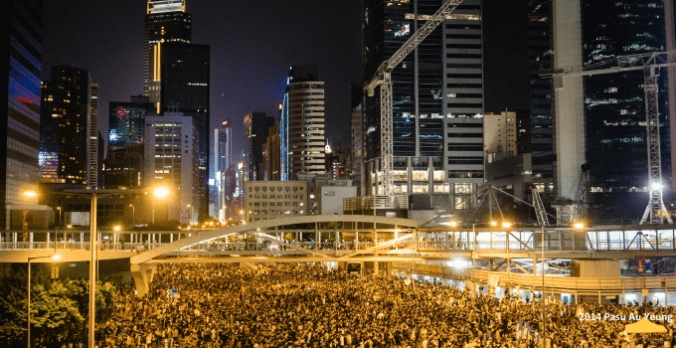 This was another busy week in global politics and I’m going to highlight some of the best tweets in my Twitter feed. Before starting, however, I will acknowledge that this post is late.

I believe my excuse is pretty good as it involves lots of late night baseball. I grew up in Kansas rooting for the local team — and the Kansas City Royals are in the playoffs for the first time since winning the World Series in 1985. Tuesday, Thursday, and Friday, the Royals won three consecutive extra inning games. All ended after 1 am Eastern Time. I then had to read for 30 to 45 minutes after the long and exciting games just to unwind enough to sleep.

None of those victories featured  the longest game of the week. As DC residents know, the Washington Nationals lost to the San Francisco Giants 2-1 in the 18th inning. I caught a bit of that contest:

Turning now to global politics, perhaps the biggest news of the week involved the protests in Hong Kong. How about one tweet for analysis and another for a startling picture?

The fight for Hong Kong has just moved to a new battlefield and Beijing is unexpectedly losing https://t.co/tdo6n3Y19h pic.twitter.com/FRXuWZS52A

Perhaps most incredible photo of #HongKong you will ever see: protests last night via @hkdemonow @WilliamsJon pic.twitter.com/GB7wmt65MM

I’ve actually seen a number of impressive photos from the protests. Here’s why those visual images matter:

What Instagram tells us about the Hong Kong protests, in one map (a lot, it turns out) https://t.co/juyPZ5D4nq

As might be expected, the Chinese government has been trying to stifle this dissent:

In China, Most Censored Day of Year. Censors deleting Hong Kong protests busier than on #anniversary of Tiananmen. https://t.co/h8ecNDIz7E

At least early in the week, leading western states made sure to signal their disinterest:

“We do not take sides in the discussion of Hong Kong’s political development," US Consulate in HK, taking a page from the British govt

Next, the latest from the Middle East and the war against ISIS/ISIL. First, reporters are pressing the administration about its overall Syria policy. This exchange is from last week’s “60 Minutes”:

Kroft: "You say Assad has to go." POTUS: "Yes." Kroft: "But we are fighting his enemies." POTUS: "I recognize the contradiction."

Second, the alliance grew, at least on paper, to include Turkey:

But third, the threat also seems to be growing as ISIS moves closer to Baghdad:

From @mitchprothero: Islamic State reportedly on Baghdad's outskirts after week of victories https://t.co/C5t7rV8tZh

In case you are wondering about the legality of the US use of force, here’s what a constitutional law scholar and former lawyer for the State Department in the Obama administration says:

I can't stand to hear the analysis of any crisis leading to the parallel with Munich. It is a shallow, lazy and boring cliché.

And this is a loaded tweet on the value of economic sanctions:

Finally, given the news about the failures of the Secret Service, a thought about the safety of America’s nuclear force:

As we learn the White House intruder made it inside, remember: Our nuclear weapons are totally secure. Nothing could go wrong.

The Strange Death of Liberal Zionism