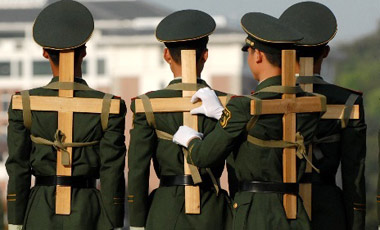 Christianity and the Sino-American Relationship

Last week, the Economist reported on the expanding sway of Christianity in China. While the numbers are difficult to pin down, The Economist reports that some argue that the number of Christians in China exceeds the number of official members of the Chinese Communist Party (87 million). What we are witnessing in China then is a dramatic shift in the constitution of domestic social systems in China as religion in general and Christianity in particular increasingly inform conceptions of what it means to be ‘Chinese’ and the accompanying systems of meaning.

From the vantage point of many in the US, the rise of Christianity in China is welcome news. Discourses about China, particularly those propagated by Republicans, occasionally highlight the ‘atheist’ nature of the Chinese regime. More broadly, the prevalence of discourses of Christian identity in the United States suggests the possibility of an emerging identity dynamic. As Chinese come to understand themselves as ‘Christian’, a harmonization in the identity dynamics between the US and China might occur as both come to see themselves as past of the same societal ingroup. This harmonization may be accelerated if tensions within China between the dominant Han ethnic group (where Christianity is growing fastest according to the Economist) and Tibetian and Uighur minorities (many of whom are Buddhist and Muslim respectively) increase. These tensions may then serve to activate the Christian/non-Christian identity duality in China, which could strengthen relations between China and at least some elements of American society. This in turn might provide some resilience to what has been and seems an increasingly fraught Sino-American relationship.

These hopes might be very premature and in fact misplaced. The function of identity in shaping socio-political relations is a product of activation and content, and on both counts Christian identity might not bind the US and China together as much as the case above suggests.

At least in the United States, and probably into the indefinite future for China, Christianity identity is not an identity that functions in the political realm (as compared to democracy in the US case or Maoism in China). That is, identity may inform the identities of some actors in both places, but a broader Christian identity does not function as a basis for understanding political behavior. For example, American politicians do not regularly invoke Christian identity to justify elements of foreign policy. Where such an invocation arises (e.g. George Bush’s use of the term crusade and religious laden language after September 11, 2001) controversy follows. Thus in the US, Christian identity is contested as a basis for understanding appropriate behavior and for establishing expectations of the self and others. That is, Christian identity does not provide a set of guidelines that govern political interaction because it does not provide a basis for political behavior expectations or political meaning-making. This in turn means that Christian identity would provide little basis for resolving political conflicts between the US and China—which predominate the relationship today and for the foreseeable future.

It may be that shared religious identity operates in the political background, generating a basic level of societal ease. Even if this is the case, the evangelical nature (as reported by the Economist) of Chinese Christian identity may prevent shared identity from operating in that way. If Chinese Christians see American Christians as wayward or even apostate members of the ingroup, that could further fuel, rather than ease, tensions between the states (see for example relations between Shi’a Iran and Sunni Saudi Arabia–both Islamic states, but both at odds in part due to differences in the content of their religious identities). Thus the content of the identity has implications for the activation of the identity as well as how the identity functions, including corporate elements (who is part of the ingroup and who is not). Thus, scholars will have to be very careful in assessing what role the important changes in China’s social fabric will have on its relations with the rest of the world.

The Costs of Irredentism

Fall of the Berlin Wall: Then and Now