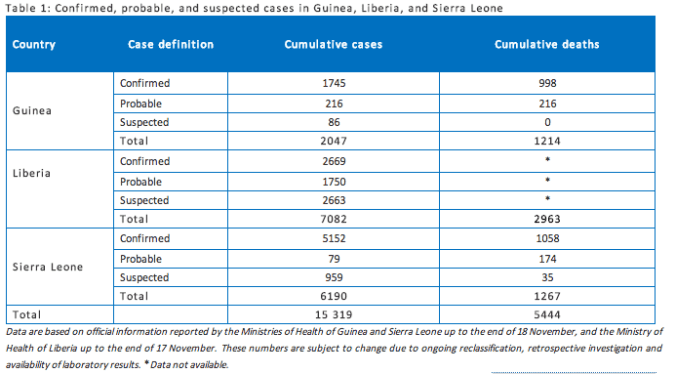 Ebola is Not Over

The Ebola crisis isn’t over. In the absence of new infections in the United States, Americans have moved on to other preoccupations (Ferguson anyone?), but the problem hasn’t gone away even if Google searches have plunged. There has been some positive news out of Liberia with a decline in the rate of new infections from 80 new cases per day to about 20 to 30, but the news from Sierra Leone suggests the problem is far from under control, with the end of the rainy season potentially making transit easier and facilitating the spread of the virus further. More troubling still is the new hot spot of infections coming out of Mali, eight confirmed cases in all, 7 of them related to a single Guinean imam who died in diagnosed in Mali and whose body was not handled properly as one would a deceased Ebola patient. 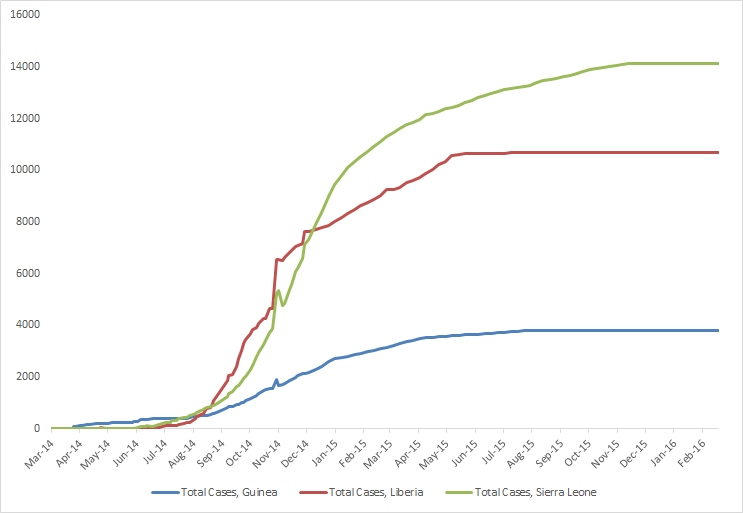 Fortunately, the international response has really ramped up in earnest since the World Health Organization belatedly declared the Ebola crisis a Public Health Emergency of International Concern (PHEIC) in early August, four months after MSF warned that the outbreak was “unprecedented.” The PHEIC designation helped set the stage for the Security Council declaration in September as a threat to peace and security, with a call for nearly $1 billion to combat the epidemic in the three countries most affected. This itself was a significant increase over the $100 million and then $490 million WHO previously had suggested in July and August would be necessary to combat the epidemic over the next six months as part of its Ebola Response Roadmap.

President Obama in response to that call pledged nearly $500 billion from Defense Department “overseas contingency operations”  funds and mobilized 3000 soldiers to build treatment centers throughout the region. He requested another $88 million appropriation from Congress for the response and later upped the contingency set aside to $750 million.

Since then, there has been some considerable mobilization of international funds, material, and deployment of soldiers and experts to the region. While there have been reports of some friction between donors and local health workers, other experts like Hans Rosling, deployed as an advisor to the Liberian government, disputed those claims.  Whether it is local adaptation in behavior or the international response, the number of cases in Liberia plateaued in September and declined in October before holding steady in Liberia.

In Liberia the number of new ebola cases/day fell in October. But in November it is more or less the same number/day. pic.twitter.com/wr9IJDSsVT — Hans Rosling (@HansRosling) November 12, 2014

The partial success in Liberia has prompted some changes in the initial plans by the U.S. military to build 17 treatment centers around the country. The first of those treatment centers only opened in early August, and some of the others may not be needed, leading to a reassessment of how best to spend the money in the region and whether the size of the deployment of soldiers needed to be as large as initially intended. The initial call for 3000 American soldiers had been increased to 4000 but by early November, the Liberian improvement led planners to consider that the original number of 3000 may be adequate, with discussion about how best to deploy military assets, with lift capability to reach hot spots perhaps a higher priority than new treatment center construction. Whether the military can flexibly re-purpose to current needs remains to be seen.

CDC and Medical Professionals: Other Boots on the Ground and in the Office

The U.S. military mission was always described as one where soldiers would have no contact with patients and merely be tasked with building treatment centers and delivering equipment and supplies. Professionals from the US Centers for Disease Control (CDC) and experts like Rosling from other countries have also been deployed to plus up the medical and technical needs in affected countries, where many health workers themselves have succumbed to the virus. Some are deployed as “disease detectives” to track down emergent hot spots of Ebola. Others are delivering health education workshops to local health workers on appropriate self-protection techniques.

CDC has some 270 staff deployed throughout the region with rotations that in typically last about a month. Though some stay for longer, the work is grueling and emotionally challenging enough that staff need a break after that period of time. To ease continuity, staff may be rotate in and out in a cycle with colleagues filling a similar role, person A in, person A out and B in, C in and B out, A in again and C out, and so on.

Staff in CDC Atlanta are backstopping these field operations through the Emergency Operations Center which looks like something out of a movie with rows of computers and long tables facing multiple screens of maps and powerpoint slides capturing the CDC’s unfolding response. The center is divided up into sections, accommodating as many 200 people, with most staff focused on Ebola which is classified as a level 1 emergency, the highest activation possible. The halls outside operations center are lined with banners capturing all the health emergencies and disasters CDC has been tasked to deal with.

Has the International Response Been Sufficient?

This is a difficult question to answer because it’s difficult to track the size of the commitments and disbursements, let alone how they have been deployed in the field. U.S. construction of treatment centers has taken a long time, leading some observers to claim that the international response may have been incidental to the decline in Liberia’s cases. That may be overstating the case, as it is clear that some significant funds have been mobilized since the PHEIC designation in August.

The estimated financial need for the Ebola Emergency Response Plan has increased several times over the past year: the need has now been raised to $1.5 billion for the period of September 2014-February 2015.  The United Nations Office for the Coordination of Humanitarian Affairs (UN OCHA) has been tasked in tracking contributions for humanitarian assistance through its Financial Tracking Service.

It appears that $815 million of the $1.5 billion has been received, but that donors have mobilized an additional $578 million for the international Ebola effort that isn’t for the response plan itself. Some $771 million in pledges appear outstanding, though perhaps only $199 million of those pledges are destined for the response plan (if I’m reading the FTS graphics right). That means that some $2.2 billion in pledges and contributions may already have been made by donors, in excess of the $1.5 billion initially thought needed. These estimates include some major contributions by tech CEOs like Bill Gates, Mark Zuckerberg, and Paul Allen. A number of these donations were made to the CDC Foundation, which has the flexibility to get these funds rapidly to the field.

The figure left appears to capture both funding for the response plan as well as other funding. As Amanda Glassman notes, not all international funds for Ebola are captured by OCHA FTS, including loans and other forms of long-term finance.

In addition, she notes that “US allocations to the Department of Defense and Health and Human Services do not appear in the OCHA database, although their funding to USAID does.” Her October blog post revealed some major differences between what was captured in OCHA statistics and details on contributions from other sources. 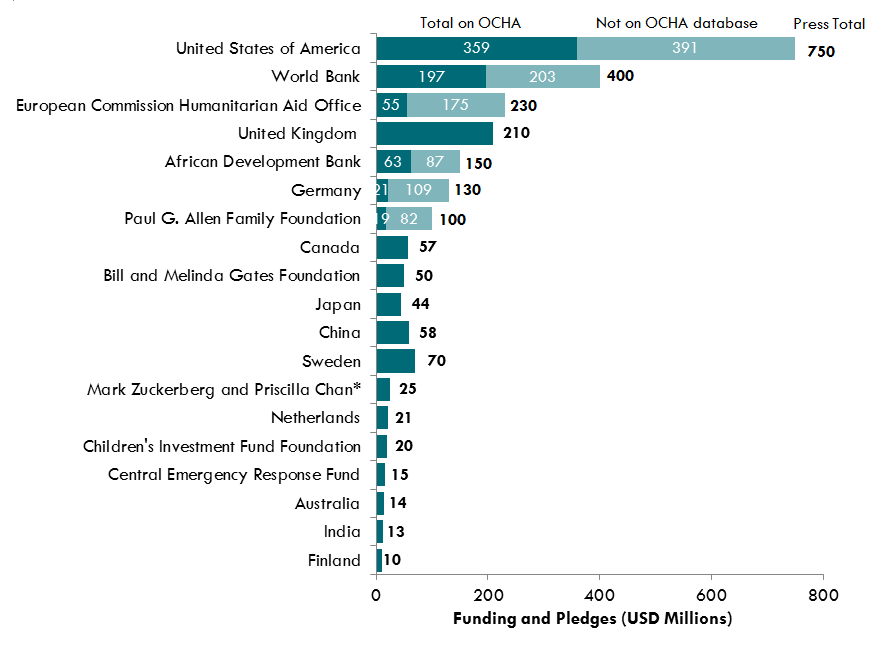 Eve if the total funds mobilized does exceed the needs assessment, it is not clear that the estimate of $1.5 billion itself is adequate or comprehensive or merely reflects the short-run emergency needs assessment rather than the long-run health systems investments that would be required to ward off such a situation again, emanating from Ebola or another infectious disease.

In early November, President Obama requested $6.18 billion in emergency funding from the U.S. Congress, $4.64 billion for immediate response and $1.54 billion as contingency fund.  Some portion of those funds will be dedicated for domestic purposes including fortifying 50 Ebola treatment centers in the U.S. Some $1.98 billion would go to USAID to fight the epidemic and help with health systems recovery. $1.83 billion would go to CDC for domestic and international surveillance and treatment efforts.

It is unclear if the Congress will fully fund this effort. The CDC took something of a reputational knock in its initial handling of Ebola domestically, but with no subsequent new infections after the Dallas scare, the agency may be seen in a better light. That said, that very success has taken some of the pressure off lawmakers from feeling compelled to act and fund the effort, though public health officials warn that the only way to make the United States and indeed the world safe from Ebola is to defeat the outbreak at its source.

Where Does that Leave Us?

International leaders have to guard against complacency. The Obama Administration has worked up a needs assessment of a $6 to contain the current outbreak and to prepare and prevent future outbreaks at home and abroad. He needs to make this a high legislative priority, possibly in the final days of this lame duck Congress.

At the same time, once the immediate crisis recedes (which cannot be taken for granted), long-term preparedness and prevention should be built in to the implementation of U.S. appropriations and the wider international response. As Amanda Glassman notes: “Moving forward, it’s crucial to ensure the efforts financed address the current Ebola crisis and contribute to public health preparedness in general.” WHO reform and expanded contingency resources will likely be part of that agenda, but the world first has to get West Africa’s epidemic under control.