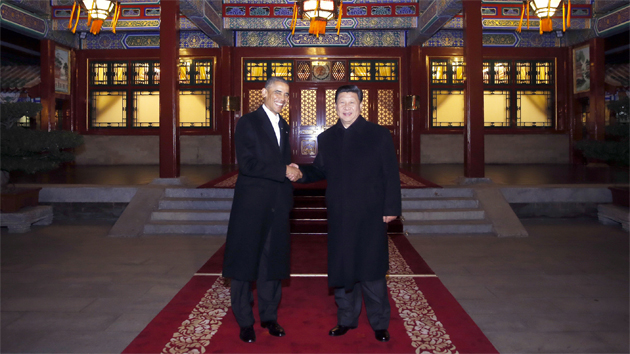 Historic Bilateral Climate Agreement Between the US and China

Here was my Tweet the other day. Today we have an answer.

Tweeps, best case scenario on climate coming out of APEC?

If you went to bed early on Tuesday night, you might have missed some very big news out of Obama-Xi meeting in Beijing, other than announcements on trade and regional security. I’m talking about the potentially momentous bilateral agreement on climate change where China announced for the first time a date — “around 2030” — for peak greenhouse gas emissions and the United States announced a 2025 emissions reduction target. This is big news, potentially changing the entire international dynamic going in to next year’s climate negotiations in Paris (and interim negotiations in Lima later this year).

With the two countries responsible for more than 40% of greenhouse gas emissions making a significant joint push, the pressure will be on other big emitting countries, namely India, Canada, Japan, and Australia to fall in to line and be constructive players themselves. It will be interesting to see how this changes the domestic context for the United States where President Obama may use existing regulatory authority and executive action to press the policy agenda, but it’s unclear if that will be enough to meet the ambitious 2025 goals. China for its part may be on track anyway to meet that 2030 peak target, but the real question is, as I’ve written before (here and here), how far it can go to move away from coal. Read on for full linkages to press coverage, Kerry’s op-ed in the New York Times, reflections from Brad Plumer, and the White House announcement that includes more detail on expanded technical cooperation. 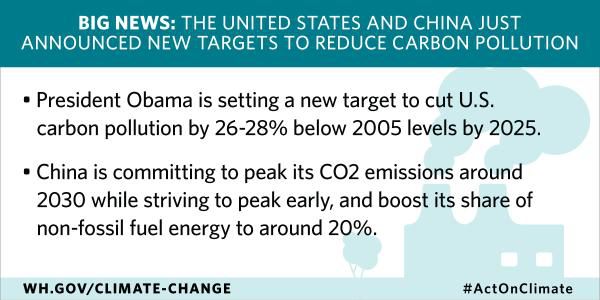 The White House summarized key elements of the deal:

The new U.S. goal will double the pace of carbon pollution reduction from 1.2 percent per year on average during the 2005-2020 period to 2.3-2.8 percent per year on average between 2020 and 2025. China’s target to expand total energy consumption coming from zero-emission sources to around 20 percent by 2030 is notable. It will require China to deploy an additional 800-1,000 gigawatts of nuclear, wind, solar and other zero emission generation capacity by 2030 – more than all the coal-fired power plants that exist in China today and close to total current electricity generation capacity in the United States.

The announcement also included (1) an extension on the Clean Energy Research Center (CERC) (2) pursuit of a major carbon capture demonstration project in China (3) continued collaboration on phase down of hydrofluorocarbons (HFCs), as well as several other initiatives related to clean cities, infrastructure, and energy efficiency (more coverage from Mother Jones here).

While no doubt there will be more media reports (Times here, WaPo here, Boston Globe here) on how John Podesta led the secret negotiations over the course of the last nine months to help pave the way for this agreement, getting the agreement might have been the easy part. Now the hard part begins. The U.S. commitment to reduce emissions by 26 to 28% below 2005 levels by 2025 is an important extension of the existing pledge to reduce emissions by 17% below 2005 levels by 2020. The U.S. is already about 10% below 2005 levels but emissions rose last year as the economic recovery started to pick up steam. As Brad Plumer pointed out, the U.S. cannot meet these expanded targets without additional action. He and Jake Schmidt of NRDC had a good exchange on Twitter about what is required. While the EPA is using existing regulatory authority to regulate greenhouse gases from power plants, probably additional steps are needed. The Obama administration already has made big strides with fuel efficiency standards so I think the big question is what else can Obama do, assuming Congressional intransigence. Major breakthroughs on energy efficiency in appliances and buildings?

The Implications and Significance

Secretary of State John Kerry already has an opinion piece in the Times hailing the agreement:

This is also a milestone in the United States-China relationship, the outcome of a concerted effort that began last year in Beijing, when State Councilor Yang Jiechi and I started the United States-China Climate Change Working Group. It was an effort inspired not just by our shared concern about the impact of climate change, but by our belief that the world’s largest economies, energy consumers and carbon emitters have a responsibility to lead.

At the recent UN Climate Summit, China had already declared that it would announce an emissions peak, but today’s announcement was the first time a specific date was mentioned. Analysts have already suggested that China’s emissions given existing policies may be on track to peak by 2030 anyway so the additional significance is unclear, other than China is moving beyond pledges to restrain the rate of growth in emissions (its prior intensity target announced before Copenhagen aimed to reduce the amount of greenhouse gases emitted per unit GDP (its carbon intensity) by 40-45% by 2020, compared with 2005).

Moreover, the secondary goal that China announced of non-fossil energy growth is potentially more significant. As Brad Plumer noted, that would require a huge addition to China’s renewables and nuclear stock:

Damien Ma from the Paulson Institute raises some interesting questions about how China will turn this in to binding law and policy domestically:

Key for China emissions peak is whether it’s binding. Presumably this is within the contours of the 14th and 15th five year plans

In general, he’s pretty sanguine that China likely thinks it can meet these targets:

11/13 Update. As a number of commentators have pointed out, the key question in addition to when emissions will peak is at what level. Mike Levi from the Council on Foreign Relations noted:

And then there’s the matter not of when Chinese emissions peak but where they peak. Do they peak 25 percent above current levels? 15 percent? 10 percent? That makes an enormous difference for global emissions.

All of this sets the stage for greater likelihood of successful negotiations next year in Paris. That said, the U.S. domestic scene could still be a spoiler. If nothing else, this APEC trip has perhaps dramatically restored Obama’s political standing in the United States, with the climate agreement being only one of the consequential agreements reached between the U.S. and China. The international trip is not yet over. The G20 summit in Australia beckons, and there are still hugely significant diplomatic ventures going on with Iran before the late November deadline for concluding an agreement on that country’s nuclear program.

After the mid-terms, there was a sense that this administration was out of steam, but this agreement and the week’s achievements may breath new life into its agenda. Going forward, it is hard to gauge how the Republicans at home will react to this news. Historically, their position was that the United States should not act until China acts. With this announcement, it is harder to use Chinese inaction as an excuse for doing nothing. However, since climate change has been elevated to be a key partisan signifier to distinguish the two parties, Republicans may not take yes for an answer and continue to try to gut EPA’s authority to regulate carbon and other measures to address greenhouse gas emissions. That intransigence may be harder to sustain if Obama’s political fortunes are buoyed by a successful international trip, which would be welcome news for those who want to see serious action on climate.