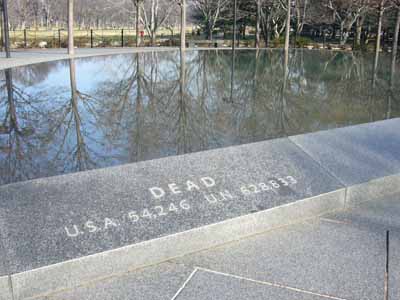 Among the various things I’ve read in the run-up to Veterans Day / Remembrance Day is this article by University of Auckland’s Tom Gregory, entitled, “Body Counts Disguise The True Horror of What Wars Do to Bodies”:

“Relying on these statistics alone may provide us with a brief glimpse at the suffering of those affected, but it ends up concealing the violence it is supposed to expose. When dealing only with numbers, we tend to lose sight of the bodies that are left broken by the machinery of war, along with the individuals who are busy living and dying on the battlefield.”

This is an important perspective. As much as numbers illuminate war’s costs, they can hide its grim realities. Still, I would argue that this is not such a zero-sum game and that on balance the construction of casualty metrics helps rather than harms the cause of reducing and mitigating war’s impact.

First, it must be pointed out that human rights organizations who document the civilian costs of war generally do so by combining quantitative and qualitative approaches. Human Rights Watch’s new memorandum on incendiary weapons, for example, includes some numbers but also heart-wrenching stories of children hit by weapons that burn. It is the individual victims who bring the wider trends to light; it is the wider trends that make those victims’ stories policy imperatives rather than simply random tragedies. Similarly, many casualty recording datasets (Iraq Body Count is but one example) provide not only a running tally but also details of each victim and each incident, or aspire to do so.

Second, the gathering of casualty metrics serves policy goals quite apart from those served by the highlighting of individual victims’ stories. We might want a human interest story to sway public opinion toward a humanitarian intervention. But to refine our collateral damage estimate methodologies to minimize civilian casualties using air power, what we most need is good numerical data on actual casualties from air strikes to feed back into the algorithm. We might need a human interest story to get Congress to pass legislation on condolence payments. But it is hard data on the numbers of affected victims that would help in appropriating sufficient funds for compensating civilian harms.

Third, in thinking about the “politics of body counts” we should be as cautious of what the numbers tell us as of what they hide. The Women’s International League for Peace and Freedom has published a new report on the mis-labeling of military-age-males as fighters in casualty datasets. Tanisha Faizal’s new article in International Security questions the entire notion of the “battle-death” as an indicator of the presence and severity of armed conflict. One problem with metrics is that they are too easily used as proxies for things we really want to understand. Yes, there are important stories behind the numbers. But the numbers themselves also encode narratives about war and peace. And they are sometimes at odds with the realities for soldiers and civilians in politically important ways.

Historic Bilateral Climate Agreement Between the US and China