Not Surprised is Not Good Enough: what soldier atrocities in Iraq and Afghanistan can teach us about Ferguson 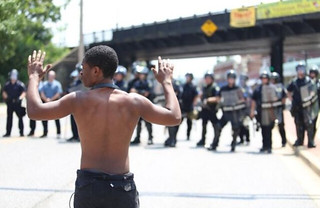 By some strange twist of fate I happened to watch the Kill Team, a documentary about the infamous US platoon that intentionally murdered innocent Afghan men while on tour. When, in 2010 the military charged five members of the platoon, the case drew international attention due to the graphic nature of the killings, evidence that the men mutilated the bodies and kept parts as trophies, and indications that the killings were part of a wider trend of ‘faking’ combat situations in order for soldiers to ‘get a kill.’ While the premeditated killing of Afghan civilians appears completely disconnected from the Ferguson grand jury decision not to indict Darren Wilson for the murder of unarmed Michael Brown, there are several common threads that deserve unraveling. Rather than characterise ‘Ferguson’ as ‘simply’ a case of police brutality, or localised racism, or isolated misconduct, such a comparison opens up space for counter-narratives. In particular, the comparison A) highlights the systemic nature of racist, militarized, and patriarchal violence across multiple institutions, including the police and the military; B) addresses the sanctioned killing of non-white men and women as a consistent feature of the national narrative; C) indicates the desperate need to both demonise a racialised other and to measure individual and national masculinity in terms of the control and suppression of this demonised other.

So, with that pleasant list out of the way, here are 3 ways that civilian deaths in Afghanistan and Iraq are similar to the murders of innocent civilian African-American young men.

1. Creating a dark and dehumanized enemy.
Whether it is at home in the US or overseas in Iraq and Afghanistan, there is ample evidence of a generalised trend for police, soldiers, and the public to hold deeply racist views about the people they are meant to be protecting.

Specifically, research shows that the police and military tend to view young African-American men and Afghan and Iraqi men as uniformly guilty, violent, and inferior. For example, the American Psychological Association found that “black boys [are] viewed as older, less innocent than whites.” Boys as young as 10 were likely to be mistaken as older, be perceived as guilty, and face police violence if accused of a crime. The study also focused on the implicit dehumanization of blacks -including by cops- as a predictor of the racial disparity in the use of force against children.

A recent CNN article summarized another study, which found that when the public viewed images of an unarmed African-American male and a white man with a knife in a conflict, the majority reported that the black man had the knife. These studies provide data to show what many Americans already know: white men and women are presumed to be innocent victims while black men are characterised as guilty and violent. So how does this play out in terms of policing? The Atlantic noted “In 2013, the Ferguson Police Department made 5,384 stops and 611 searches. 86 percent of the stops and 92 percent of the searches were of black people. Only 67 percent of the town’s population is black”.

Similar characterisations take place when soldiers and the public talk about the ‘enemy’ in Afghanistan and Iraq. In the particular case of the Kill Team, several of the accused openly talked about Afghans as “savages” and acknowledged and inability- or unwillingness- to distinguish between Afghan civilians or insurgents. While being interviewed by investigators, one convicted soldier explained, “Most people within the unit disliked the Afghan people, whether it was the Afghan National Police, the Afghan National Army or locals.” Another soldier later confessed “To be honest, I couldn’t tell the difference between local nationals and combatants.” When asked about civilians Sergeant Calvin Gibbs, said to be the ringleader of the Kill Team, stated “these people are savages, look at how they live.”

But this isn’t limited to this small group of soldiers. A 2007 Army survey found that “only 38% of marines and 47% of soldiers said non-combatants should be treated with dignity and respect.” This same study found that nearly 1/5 of Army staff viewed all civilians as insurgents. A wider survey of all services noted that 1/3 of marines and 1/4 of soldiers reported that their leaders had not instructed them not to mistreat civilians. A 2007 Army survey.

More explicit parallels between the two cases are not hard to find: Al Jazeera recently ran a feature about US war resisters who are still seeking asylum in Canada. Former US soldier Rodney Watson explained that he deserted the military after his first tour in Iraq because “Midway through my deployment, after I witnessed other soldiers doing certain things — how they would take out their aggression on unarmed civilians — it reminded me of how the police do us [black Americans] in our own country.” The Atlantic article mentioned earlier also found that US communities that have experienced racialised policing for generations often “feel like they’re not being policed but occupied.”

2. What Happens When Racism Meets Militarisation
There have already been several great articles and posts on racism and militarisation here, here, and here– so I won’t rehash all the points. But it is worth drawing some commonalities between police brutality and soldier behaviour in war.

The militarisation of the police was established as an overt policy objective through the 1033 program, which saw the police adopting military weapons, equipment, and strategies. David Smith notes that the program came into force during a period in which A) crime was declining in the US, and B) there was a heightened panic about urban black “super-criminals.” Characterisations of black men as the ‘enemy’ in the war on drugs and as these super-criminals further entrenched systemic racism. Dara Lind at Vox summaries the results: “police are specifically charged with keeping order and with stopping crime, which has now become synonymous with black behaviour in the streets.” The ACLU concluded in 2014 that “the militarisation of policing encourages officers to adopt a ‘warrior’ mentality and to think of the people they are supposed to be serving as enemies.” Obama’s recent announcement that millions will be spent on new police gear, including body cameras to place on police, acknowledges the racism, but admits defeat to its power.

In Iraq and Afghanistan we expect militarisation- it is a war, after all. But the trial of the Kill Team members revealed a distinct tension between counterinsurgency objectives and militarised cultures. Counterinsurgency operations call for soldiers to form relationships with civilians, consult with locals, and train and co-operate with national militaries. US soldiers- particularly those in infantry- have readily talked about boredom, frustration, and an inability to ‘do their job’ the way they were trained. Kill Team member Cpl. Jeremy Morlock explained that he and other members sought to “get kills”  because they were bored and had been tasked with doing work that “was nothing like people hyped [war] to be.”

It is clear the military and the police are expected and encouraged to use force to achieve their objectives and that both institutions show an inability to integrate, operationalise, and enforce alternative methods of ‘doing one’s job’- particularly for situations that clearly do not require killing. In his paid interview, Darren Wilson continued to defend his actions, claiming he was doing his job and that he couldn’t see how else he could have reacted in the situation. Similarly, members of the Kill Team defended their behavior during the trial. Platoon member Justin Stoner stated “You’re training us from the day we join to the day you’re out to kill. Your job is to kill. … Your job is to kill everything that’s in your way…“Well, then why the hell are you pissed off when we do it?”

3. Apathy, not justice for racialised victims
Many recent posts and articles have noted the history of white cops “let off the hook” for killing African-American men. Social media was buzzing last week with comments that people were devastated but “not surprised” with the Ferguson grand jury ruling (and really, is there any more apathetic thing to say than ‘I’m not surprised?!’).  Those who are still earning about the process of grand juries have recently found out how rare it is NOT to indict. As one article explains “the standard is so low that a grand jury refusing to go forward is essentially saying that there was no plausible basis for the case in the first place. Not having seen the evidence, we the public unsurprisingly find it shocking that the shooting of an unarmed man by a police officer should not give rise to at least the probability of a crime.” (For more on this see: problems with the grand jury, and how not to use a grand jury) In terms of social justice, while there has been widespread protests and outcry over the killing of Michael Brown and other unarmed African-American men, it should be noted that there is also a strong movement in support of Darren Wilson. A gofundme campaign raised more than 70,000 in three days to “Support Officer Darren Wilson.” Donors left comments that included “Thank you for putting your life on the line to protect us from thugs” name “glad to see someone that stood up for the average american.”

There are also signs that military courts fail to provide justice for Iraqi and Afghan civilians (too many to name here). The most glaring example is that, although Sergeant Calvin Gibbs was convicted of three counts of premeditated murder (amongst other charges, including those for keeping body trophies and eliciting murder) for the deaths of Gul Mudin, Marach Agha, and Mullah Adahdad, he could be free in less than 8.5 years. More broadly Amnesty International says there is no accountability for civilian deaths in these wars and a Washington Times article claims that Americans largely ignore the civilians killed in American wars. Richard Slotkin claims that Americans are able to ignore these deaths as a result of  “the frontier myth,” in which “righteous violence is used to subdue or annihilate the savages of whatever land we’re trying to conquer…”

Just as Chauncey DeVega, author of the blog We Are Respectable Negros, has encouraged us acknowledge that “racism and police brutality are not separate things;” similarly, civilian deaths and racism should not be disconnected.

It is difficult to ‘make sense’ of the death of Michael Brown, but simply focusing on the event itself and the grand jury processes is not enough. As bell hooks constantly reminds us, unravelling one form of oppression requires fighting all forms of oppression. These cases demonstrate the racist, capitalist, patriarchal (and I would add militarised) system that a) establishes violence against some as a tool for establishing order b) equates violence with power, manliness, and security and c). allows us to accept (or at least not be surprised by) the death of innocent men.

The Perils of a M/W/F Class