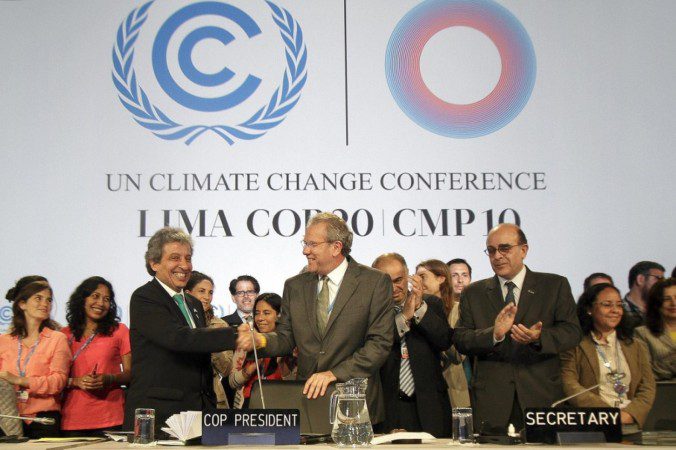 Last fall, I wrote about how the U.S. government was insisting that any climate mitigation commitments agreed to in the 2015 Paris climate negotiations be non-binding political pledges. I argued that was appropriate because the high bar for treaty ratification in the U.S. Senate made legally binding commitments unlikely.

This kind of soft “pledge and review” approach to climate change first emerged at the 2009 Copenhagen negotiations, often derided by observers as an unsuccessful meeting. Quite the contrary, as I argued in a 2010 piece for the Council on Foreign Relations, Copenhagen actually set the stage for main emitters finally to make more credible commitments to take action. This is the tenor of a number of recent articles and interviews with David Victor, Andrew Revkin, Eric Voeten, among others. One thing that all these authors underscore is the importance of domestic politics going forward.  Recent experiences in Australia, South Korea, and Brazil, as well as the United States, all demonstrate the fragility of domestic climate policies.

Soft is the New Hard

Andrew Revkin on the Dot.earth blog at The New York Times sought to shift how people understand non-binding climate commitments: “In Climate Talks, Soft is the New Hard – and That’s a Good Thing.” He elaborated:

But it has become clear that efforts to set binding hard targets when dealing with greenhouse gases — which remain deeply linked to economic activity — were counterproductive and probably delayed progress, as a number of analysts had warned (read the Hartwell Paper for one such take)….

David Victor also endorses this new voluntary approach to climate commitments. Though the level of ambition is not yet enough, non-binding commitments and country pledges have the advantage of flexibility. Moreover, he notes:

The other plus, in theory, is that this approach allows for multi-speed policy efforts. You can have different groups of countries doing different things [on climate change] under the broad umbrella of this Paris agreement. That’s good news, because it’s often easier to reach agreement in small groups. Examples include the recent US-China deal on emissions, or the Norway-led partnership on forests.

Coral Davenport of The New York Times suggested that this new system is based on international peer pressure where states will name and shame bad actors. However, as Andrew Guzman has written, reputational costs are often quite small. States facing high costs of taking action on climate change can quite easily buck the court of international public opinion, as the United States, Canada, and Japan did after the Kyoto Protocol.

Does that mean an international agreement is unimportant? No, it is extremely important. Some years ago, Jana von Stein and Beth Simmons (here, here, here) had a great exchange on whether international agreements screen or constrain. In other words, do states merely sign on to agreements that they know they could comply with? Or, do treaties have any independent compliance pull?

While von Stein argued that treaty mechanisms merely serve as screens to codify what countries were prepared to do unilaterally, Simmons suggested that the amount of time and energy states invest in hammering out agreements suggests that they must have more compliance pull, otherwise states would not bother.

The important point is not to treat the states as a unitary actor. International agreements, if structured properly and if generally followed, create compliance pull by virtue of reinforcing the political hand of domestic actors who support an agreement.

Eric Voeten captured this sentiment in a column reflecting on the climate agreements:

The purpose of international agreements and institutions is to help those domestic groups that favor emission curbs, not to set central standards that the international community can’t enforce. This fits the insights from political scientists that the effect of many treaties depends on domestic politics.

The problem is the compliance pull of the regime has been weak for the part fifteen years. Because the Kyoto Protocol did not include commitments for countries like China and had no graduation mechanism for it to take on commitments, the regime disincentivized participation by the United States. With the United States outside of the regime, Kyoto-participating countries like Japan and Canada found it difficult to stay the course and sustain costly climate commitments. (After the Fukushima disaster in Japan, Japan’s leadership backpedaled on its climate commitments. After the Conservative Party took over in Canada, Stephen Harper’s government encouraged tar sands exports and ultimately withdrew from the Kyoto Protocol).

In the absence of a facilitative international agreement that includes the main emitters, namely China and the United States, taking on commitments (albeit voluntary ones), we continue to see this dynamic of political leaders embracing ambitious climate goals, only to have their successors walk away from them.

We see that in Australia where the Labor Party’s carbon tax was repealed by Tony Abbott. We see that in Brazil where the Lula government’s success in clamping down on deforestation has given way to efforts to weaken the Forest Code, a spike up in deforestation in 2012 and 2013, and the appointment of an enemy of green goals as agriculture minister in the second term of President Dilma Rousseff.

We also see that in South Korea where the new Park government has tried to scale back some of the ambitious climate goals ushered in by her predecessor, namely by delaying a planned carbon tax and downgrading the importance of green concerns through the government bureaucracy. Fortunately, those moves have not been a complete about face. Korea is still home to the Green Climate Fund, and the country’s cap-and-trade system just went in to effect, to become the second largest after Europe’s system.

Still, in the absence of a global agreement, it is easy to see these measures as vulnerable to political shifts. President Obama just announced a series of policies to rein in leaks of methane, a potent greenhouse gas. The bilateral US-China agreement reached in November to rein in greenhouse gases gave President Obama some cover to establish these rules (it also helps that most of these changes are rather easy to implement). A successful set of negotiations in Paris at the end of this year may go one step further and make it harder here at home for President Obama’s successor to walk away from that agreement.

Vote Now for the 2015 (The Duckies) IR Blogging Awards