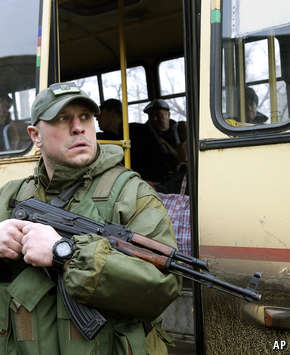 Should the United States Arm Ukraine?

With Russia’s incursions into Ukraine becoming more aggressive, there has been a lot of chatter about whether or not the U.S. government should arm Ukraine with lethal weapons. Defense Secretary Nominee Ash Carter has signaled his openness to such a move. Ivo Daalder, Strobe Talbott, Steven Pifer, and collaborators have issued a call for such support. There has been push back from Sean Kay and Jeremy Shapiro, other establishment foreign policy types. (With Talbott, Shapiro, and other folks from Brookings weighing in on opposing sides, there has been interesting discussion of this being an internal food fight there).

What are their arguments? How can we adjudicate who is right? In other words, what kinds of empirical and theoretical arguments can we draw on to assess these differences in judgment?

Advocates for arming Ukraine suggest that this move is necessary to raise the cost calculus facing Putin and suggest that Putin’s efforts to hide/obscure casualties from the Russian public suggests a cost sensitivity. Given the immense financial losses associated with the sanctions, advocates imply there is a special sensitivity to military deaths.

All of this suggests a familiar rational calculus model that we might be familiar with in political science circles. Surely, there is a point at which these combined costs of sanctions and casualties will become manifest to Putin that his supporters will demand a change in policy, a peaceful resolution of the conflict with Ukraine.

It appears that the Obama Administration’s current hope is that the threat of defensive weapons for Ukraine will encourage Putin to reconsider the recent escalation:

The Obama administration’s hope is that its widely reported deliberations over whether to send defensive weapons to Ukraine and about additional economic sanctions will induce Russia to agree to a halt in the fighting and, ultimately, to a political agreement within the framework of the Minsk accord.

Opponents for their part worry that this escalatory cycle will only make a cornered Putin lash out more. This is after all in Russia’s backyard, considered to be part of their traditional sphere of influence and not a peripheral area distant from the home country. This would be, in political science parlance, voluntarily chain-ganging the U.S. and West to Ukraine, potentially leading to an escalatory cycle, particularly if Ukraine ends up badly playing its hand in a proxy fight.

Talbott and Pifer’s reply this criticism is that without more decisive action by the West to raise the stakes for Putin that he might not stop at Ukraine:

Part of the calculation is based on concern that the Kremlin, if it believes that its hybrid warfare tactics in Ukraine have worked, will be tempted to try them elsewhere. Jeremy writes that Ukraine is a unique case and suggests that we need not worry. Perhaps, but we see reasons for concern, especially as Russia violates a host of its commitments going back to the 1975 Helsinki Final Act, conducts provocative military exercises all around NATO, kidnaps an Estonian security officer, and loudly proclaims a right to “protect” ethnic Russians and Russian-speakers, regardless of their location or citizenship—or whether they wish to be “protected.”

Others like Sean Kay worry that the signal sent by sending lethal weapons to Ukraine will encourage Putin to escalate the conflict rather than back down, particularly in the window between when the policy is announced and when the arms arrive:

These tactical responses to Putin’s reckless behavior are well-intended, but risk producing dangerous outcomes for the United States while doing little to change the situation in Ukraine. It would take time to adequately equip and train Ukrainian armed forces in an impactful way – even with relatively modest items like counter-battery radars and anti-tank missiles. Advancing weapons into Ukraine is precisely the kind of evidence that Putin wrongly says justifies his illegal actions. There is every reason to believe that Russia would respond not with negotiation, but perhaps with more, and even deadlier, war.

Europeans may be especially worried about an escalating active conflict at the doorstep. As Tim Boersma, also at Brookings argues, the move could threaten transatlantic unity at a critical moment:

We are talking about a possible full-fledged war on Europe’s very doorstep. Many Americans seem awfully cavalier about risking that war in somebody else’s house. The authors of this report do not appear to have discussed their proposals with any European national officials outside NATO or even seriously considered European views on the subject. The rather stiff reaction of German Chancellor Angela Merkel to the idea implies that that may have been a mistake. The French defense minister dismissed the idea of sending lethal weapons too.

It is hard to navigate these different perspectives, because advocates of sending lethal force include people who know a lot about the region and Putin. Maybe there is something about the recommended items (UAVs, radar systems, comm’s systems, humvees, anti-armor missiles) would diminish the likelihood of escalation, but the mere announcement rather than the substance may be more important in triggering a reaction from Putin.

And there is the rub. All of this comes down to a theory of how one individual will respond to these overtures (Putin) and what goes in to his decision-making calculus.

As Dan Drezner argued in his comment on Jessica Weeks’ new book Dictators at War and Peace, authoritarian Russia is governed by a personalist strongman who may not be sensitive to the traditional kinds of costs calculations that we might imagine because he ultimately does not depend upon a wider selectorate of support. There is no Putin coalition. There is Putin, and that’s why sanctions are taking a long time to have an effect:

The trouble with Russia is that despite report after report after report that Russia’s incursion into Ukraine has been an economic disaster, this will not deter continued Russian aggression. Vladimir Putin’s cost-benefit analysis calculations look very different from everyone else’s. Indeed, as Russia’s economy goes south and the Great Chinese Hope fails to materialize, Putin is likely to lash out even further. The West had better get prepared now for that eventuality.

Here, Sean Kay reminded readers that Putin is much more motivated to defend interests in the region and that additional outside support for Ukraine will only encourage Putin’s paranoid sense of foreign antagonism:

Military escalation at this time would entangle America in a conflict adjacent to a declining, paranoid, and nuclear-armed Russia. What Russia has done in eastern Ukraine is unacceptable and the Russian people will eventually look back and wonder what their “leadership” was thinking.

What’s needed from this perspective is the long view on Russia’s interests and how badly it has played its hand. As Dan Nexon noted in a post earlier last year, democratization in Ukraine is seen as close to an existential threat to Russia: “The loss of influence in a territory core to Russia’s strategic interests and its
great-power status.”

This still begs the question whether the scope of his ambitions stop at Ukraine’s border, but I wonder if, with oil prices as they are and Russia’s economy expected to contract by 5% this year, would a President Putin would or could embark on a quest beyond Ukraine?

James Fearon’s now classic article on rationalist explanations for war suggested two possible reasons why states would go to war even though there is a plausible diplomatic solution that would be less costly than war:

Second, essentially two mechanisms, or causal logics, explain why rationally led states are sometimes unable to locate or agree on such a bargain: (1) the combination of private information about resolve or capability and incentives to misrepresent these, and (2) states’ inability, in specific circumstances, to commit to uphold a deal.

In the first instance, I think we now have a better appreciation of Putin’s resolve in a way that might not have been apparent early on, which might help explain why Russia reacted to outside efforts to support Ukraine’s democratization. The second argument may be relevant here because the West has no way of knowing if Putin’s ambitions will be sated if Ukraine is Finlandized or worse.

However, from a structural perspective, I think Nexon’s argument is still on point. Russia is not a rising power on the move but a declining state with limited options. Time is not on their side:

For all the ways that the United States and the European Union blundered into the current crisis, it is Moscow that now worries that it has overplayed its hand. Even if the end result of its gamble is a pliant regime in Kiev, the global balance of power will emerge completely unaltered. Indeed, Moscow is no longer a global power capable of threatening key American interests. The reset’s failure is Russia’s problem, not Washington’s.

Global shift – the US, China, and the Hong Kong Protests