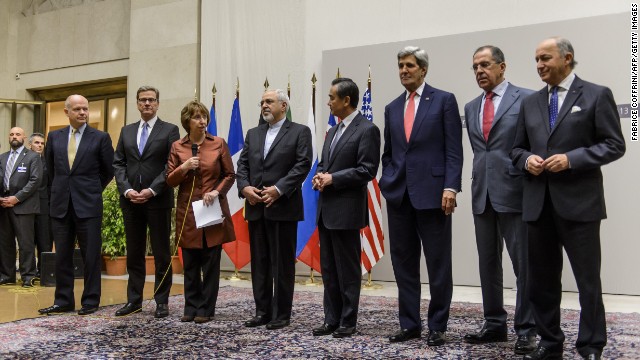 I’ve been reading some interesting exchanges on Facebook about the pros and cons of the Iran deal, and though I’ve been snowed under by grading to have much bandwidth for blogging of late, I thought I would start an open thread here.

Fareed Zakaria laid out the case for a deal before it happened in this post, seeing a deal (but presumably not just any deal) as better than the alternatives, continued sanctions and airstrikes, which to him had too many disadvantages and could lead to catastrophic outcomes in the region. David Ignatius had a quick take that suggested the deal was better than expected. David Rothkopf also was also generally warm to the deal on Twitter.

If both the U.S. and Iran think they got a win, can they both be right? Those worried about Israel’s security seemed to think that this was a bad deal and the answer is no, that there is some zero-sum element here. Others worry about what the Gulf states will do and whether or not those states will see this deal as a reason to move forward on their own nuclear programs, given that the deal allows Iran to continue some, albeit reduced,  enrichment.

My own view is that much remains to be nailed down, the U.S. and international community should get more time, more transparency if and when Iran decides to break out and pursue nuclear weapons in earnest. In exchange, Iran will get the prospect of removal of sanctions (though not immediate). That’s not a zero-sum outcome, though for the Israelis and Gulf states worried about Iranian influence in the region (and the prospects for what Iran might do with extra revenue from an unsanctioned, more vibrant economy) that may be cold comfort.

What do you think? (Some choices quotes from observers after the jump).

What’s in the deal itself? A CNN explainer including 1) centrifuges 2) enrichment 3) breakout time 4) Fordow 5) research and development 6) inspections and 7) lifting of sanctions

Zakaria suggested that an extended sanctions regime would not be all that effective, noting that Iran has more centrifuges now than it did in 2003. A bombing campaign would lead to even worse outcomes:

That raises option two, a military attack. People speak of a strike on Iran like Israel’s against an Iraqi reactor in 1981 and a Syrian facility in 2007. But those were single facilities. Iran, by contrast, has a vast nuclear industry, comprising many installations spread across the country, some close to population centers, others in mountainous terrain. The United States would effectively have to go to war with Iran, destroying its air defenses, then attacking its facilities in dozens — perhaps hundreds — of sorties. The bombers would be equipped with highly explosive weapons, demolishing buildings, reactors and laboratories, but also producing considerable collateral damage.

What would be the effect of such an attack? When any country is bombed by foreigners, its people tend to rally around the regime. The Islamic Republic would likely gain domestic support.

Ignatius argued here are the elements that were better than expected:

The tentative terms of the deal, as described in the U.S. “parameters” memo, actually exceed what many had thought possible. The Iranians would be allowed to operate 5,060 centrifuges for the next 10 years, rather than the 6,000 or 6,500 that earlier leaks had suggested. For 15 years, enrichment would be banned at the hardened, underground facility at Fordow, longer than some had expected. The Iranians could enrich some uranium at Natanz but only to the 3.67 percent level, vastly below weapons-grade, and the stockpile of enriched material would be capped at 300 kilograms for 15 years.

Ignatius worried about the possible gap between the US detailed facts sheets and the Iranian-European statement that was more general. Do the two sides think they have a different deal?

One signal of the incompleteness of what was announced Thursday was the mismatch between the detail-rich U.S. fact sheet and the thin, page-and-a-half statement read jointly by European Union foreign policy chief Federica Mogherini and Iranian Foreign Minister Mohammad Javad Zarif.

Impact of deal appears to be net positive re: nuke program but debatable–but beyond debate that it will increase growing Iranian influence.

Deal appears to be constructive & step forward but if primary Iranian threat isn’t nuke program & this increases that threat that’s a worry.

Easy to take issue with elements of Iran deal but huge credit to all involved in tireless diplomacy that has brought us this far.