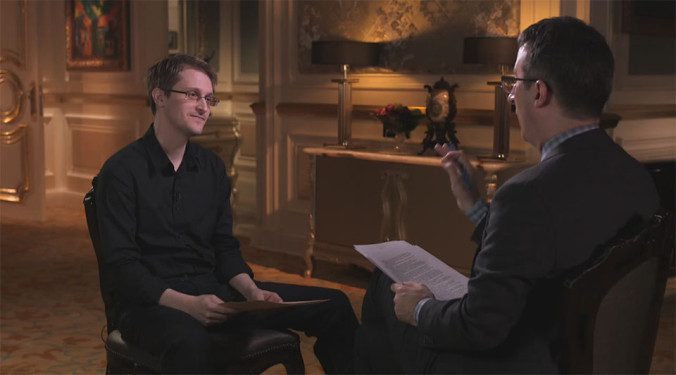 Last night, John Oliver (the comedian no less!) had a terrific interview with Edward Snowden, which was much more introspective and challenging than the Oscar-winning documentary Citizenfour. Oliver sought to grapple with the necessity for secrecy in intelligence and  the moral responsibility Snowden faces for trusting journalists to properly vet what materials to release and subsequent errant release of sensitive material (like anti-ISIS operations in Iraq):

He continued, “So The New York Timestook a slide, didn’t redact it properly, and in the end it was possible for people to see that something was being used in Mosul on al Qaeda.”

“That is a problem,” Snowden replied.

Oliver had a fantastic set-up on how the American public isn’t concerned about what surveillance capabilities the U.S. government has and can use against American citizens, involving an entertaining exchange about pictures of his genitalia. The whole interview is a worth a watch. All of this is part of a interesting gambit for Oliver as swashbuckling comedian/journalist/advocate that he has advanced on a series of issues in his short time on the air. Open comment thread follows on surveillance, Snowden, infotainment, etc.

Power and Negotiation: A Geopolitical Waltz