The Freedom to Speak Up As Academics: The Right to Make An “Ass” of Myself Personally

On Thursday, I became part of a growing group of academics that has had a letter like this written about them: 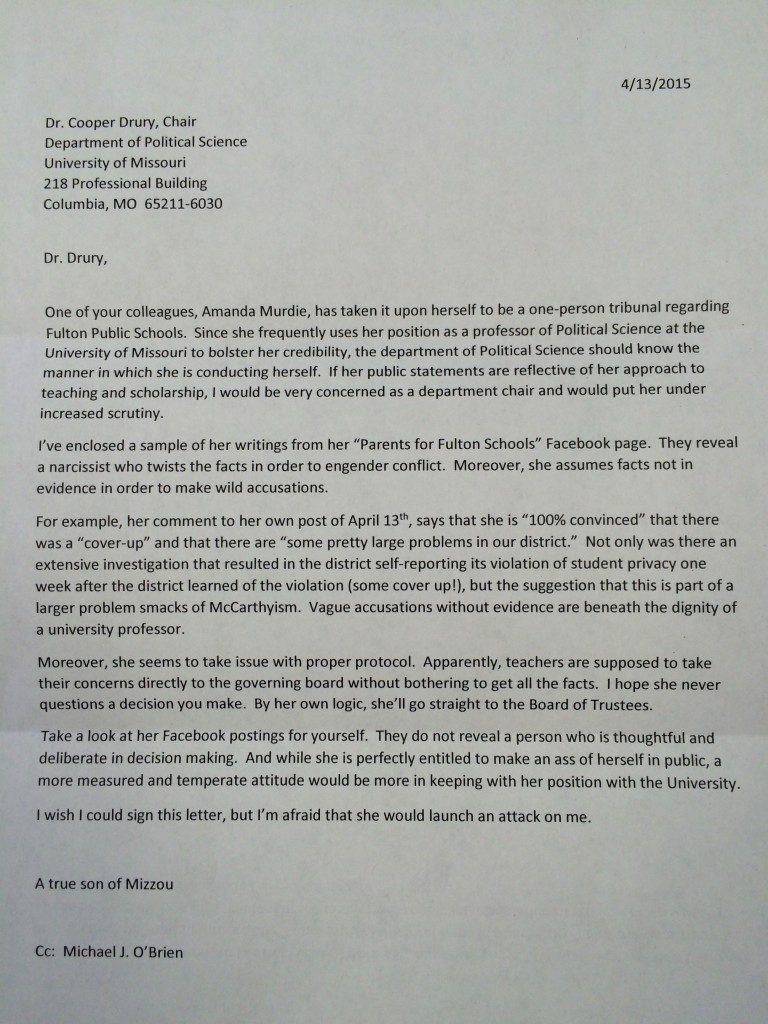 As a parent, I’ve been doing some advocacy about my children’s school this year.  The advocacy received some local media attention recently when my children’s District Administration tried to defend an activity that violated federal privacy rights.

Luckily, I’m in a department where, instead of encouraging me to be silent, senior faculty advised me to frame the letter and include it in my annual evaluation under “service.”   I love my university and I love the fact that I’m still allowed to have personal beliefs and speak out about these ideas in a transparent way.

Beyond my case, a letter like this brings up larger issues that about the ability of academics to speak up for things they believe in.  And, as Rob Jenkins remarked in a recent Chronicle opinion piece, “academic freedom is taking a beating.”  He goes on to say:

“But what is even more endangered, it seems to me, is the right of faculty members to speak their mind outside of the classroom, off-campus, and apart from their contractual duties. In return for a paycheck, faculty members are increasingly expected to surrender their personal beliefs on controversial topics, lest—God forbid—they say something that might “embarrass the institution.”

That, I would argue, is an attempt to suppress free speech.”

Would a letter like this  have been written to my employer if I wasn’t an academic?  I’m not sure it would have been. The unnamed “Son of Mizzou” who wrote that letter seems to imply that I need to be “more measured and temperate” in my personal dealings due to my professional job.   However, as an academic, I feel it is my duty to protect diverse ideas and opinions and be open to transparent debate about these ideas, whether they occur in my professional or personal life.

I stand by everything I have said, posted, tweeted, and written in advocating for my children this year.  Moreover, I stand by the right of all us to speak up for things we believe in, whether we are academics or not.

The New Mineshaft Gap: Killer Robots and the UN