There is No Lone Wolf Terrorism: but there is anxiety about brown men, loneliness, and mental illness 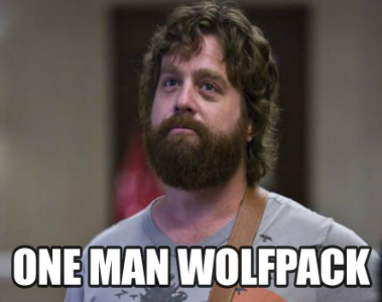 There’s something about ‘lone wolf terrorism’ debates that stinks. I can’t quite find a singular source of the smell, but after further investigation, it seems the relatively recent surge in the use of  the category ‘lone wolf’ to describe individual acts of political violence draws on extremely rank racist, sexist, and alarmist logic. When you compare the sparse literature on lone wolf terrorism and the slough of articles on the topic, one thing is clear: definitions of lone wolf terrorism are “fuzzy”, disparate, and often rely on contradiction and assumptions about mental health and motivation. The defining feature of the lone wolf terrorist is his or her (actually it is almost always a male) lack of wolf pack (I can’t get past the Hangover reference either, but stay with me). They are loners, committing political violence. Below, I raise several questions about the literature and discussion on lone wolf terrorism in the hopes of inviting dialogue and debate about why this term has such political purchase.

1. Is it possible that ‘lone wolves’ are neither lone nor wolves? The problems with definition:
The US Government defines terrorism as “premeditated politically motivated violence perpetrated against noncombatant targets by subnational groups or clandestine agents.” The overarching argument is lone wolf terrorism differs from ‘regular’ terrorism in that it is orchestrated by an individual. Yet the existing definition of terrorism seems to include agents as well as groups. So what purpose does ‘lone wolf’ serve? If ‘lone wolves’ are defined as acting politically, doesn’t this assume- by definition- the affiliation, or at least association, with a larger group? Recent research into 119 lone-actor terrorists in the United States and Europe, concluded that the individuals clearly expressed their beliefs and grievances to others, primarily family, friends, or an online community. This seems to indicate that ‘lone wolves’ aren’t that lonely.

2. Is ‘lone wolf’ code for scary brown men?
Historically, ‘lone wolf’ terrorism was associated with everything from anti-abortion, white supremacist, and religious violence. However, today it is primarily used by the media today to refer to ‘radicalized’ men, many of whom are ‘recent converts’ to Islam. In Canada last year Martin Rouleau-Couture drove a car into two military members- killing one. Two days later a  Canadian soldier was shot outside of Parliament by Michael Zehaf-Bibeau. Both incidents were described as acts of ‘lone wolf’ terrorism, with the media focusing on their religious affiliations. The Canadian version of Time Magazine included a feature article on “The Rise of the Lone Wolf Terrorist,” which included a timeline of lone wolf terrorist attacks. All of the incidents were led by men, and all but two (US Pilot Andrew Joseph and Anders Breivik) were described in relation to Islam. In an excellent and comprehensive feature on lone wolf terrorism, Matthew Harwood concludes that indeed “‘lone wolf’ has largely become a stand-in for ‘Islamic terrorist,’ with most analysis ignoring the long history of individual acts of political violence. What seems missing from even the critical analysis of this term is its roots in white supremacist movements and the ways in which it mimics other racialized discourses about the inherent threat posed by black, brown (and non white) men.

3. Does lone wolf further associate/conflate mental illness with terrorism?
Literature and articles on lone wolf terrorism are HUGELY problematic in this vein. Terms like ‘normal’ ‘pathological’ ‘loner’ ‘troubled’ get tossed around with abandon. In an article on the psychology of lone-wolf terrorists, Sophia Moskalenko and Clark McCauley describe one perpetrator as having a ‘history of mental illness’ another as a ‘loner’ and yet emphasize how ‘normal’ most lone-wolf terrorists are. Neumann says “lone wolves are more likely to suffer from social isolation and mental health problems than “normal” terrorists.” Such moves fail to take seriously the various types of mental health issues that the public- and individuals accused of ‘lone wolf’ terrorism- may be struggling with, and inadvertently links mental health issues with a propensity for violence and social terror.

4. Does the use of ‘lone wolf’ terrorist justify extreme national security policies?
Despite the varying, vague, and contradictory definitions of lone wolf terrorists, national governments seem convinced that concrete policies are needed to combat this apparently rising phenomena. Despite its ambiguity and the lack of data on incidents, Peter Neumann, Director of the International Centre for the Study of Radicalization and Political Violence in London directly links lone wolf terrorism to al-Qaeda, claiming  “it was adopted as a deliberate strategy by al-Qaeda in the late 2000s.” Although the two Canadian perpetrators mentioned earlier had no explicit affiliations, and did not express loyalty to ISIS or ISIL, Canada’s Public Safety Minister, Steven Blaney described the actions of Rouleau as “clearly linked to terrorist ideology.” This association between individual acts of violence and global terrorism create panic and justify counter-terrorism bills that violate or infringe on personal rights and liberties.

5. What are the gendered politics of the lone wolf term?
I could go on forever here. But in the name of sparing you from another discussion of the band of brothers I’ll just remind readers that the entire ‘problem’ with lone wolf terrorists is that they lack a pack- that they are solo. This characterization solidifies the sanctity of the armed group/band of brothers/wolf pack (ok, stop thinking about the Hangover monologue) as much as it pathologizes solo political violence. Never mind characterizations of lone wolves as “fanboys” who envy the comradarie of al-Qaeda or ISIS- the gender analysis does itself here.

So it seems that the real value of the ‘lone wolf’ category is to further legitimize racist, sexist, and anti-Islamic beliefs, policies, and security strategies. The term also creates social panic in giving the impression that certain men may be terrorists who could strike anywhere, anytime, and with any means. Moreover, it and associates mental illness with violence and creates anxiety around loneliness, or being alone.