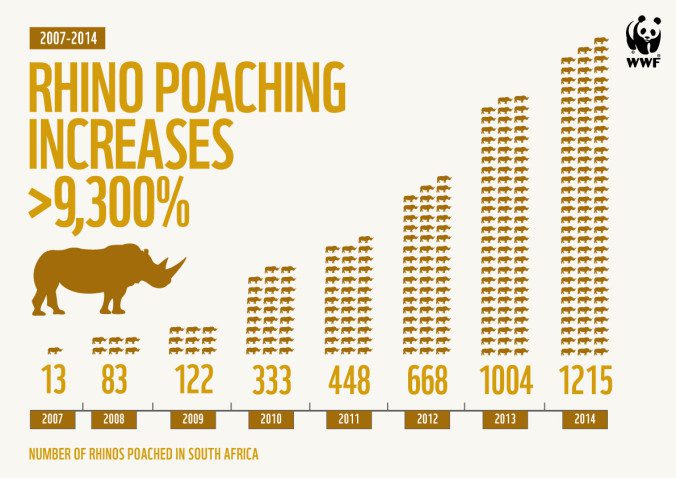 I’ve been MIA of late on the blog, mostly a function of end-of-term obligations. I’ve led a year-long graduate course on global wildlife conservation (course blog here). If you haven’t followed the news of late, iconic wildlife species like rhinos and elephants are threatened with extinction, mostly because rising incomes in China and Vietnam in particular are allowing more people to satisfy their desires for wildlife products.

Since the late 2000s, there has been a surge in demand for wildlife products. For example, poaching of rhinos, most of which survive in South Africa, have increased from negligible levels in 2007 to in excess of 1000 animals slaughtered per year. Much of the demand comes from Vietnam where ground rhino horn is erroneously thought to be a cure for a cancer, a hangover cure, and other maladies.

We recently presented our findings in Washington, DC before different audiences, and in the coming posts, I’ll be highlighting the key findings from six different areas – consumer demand, security, multilateral approaches, sport hunting, ecotourism, and public-private partnerships. I invite you to watch a video of our findings below or to review a powerpoint of the key issues here.

The planet is set to experience an extraordinarily tragic loss of species. This is inherently a political problem – weak range states in Africa, strong states in Asia with populations that lack an ethos of care for wildlife, and Western states with vibrant conservation communities but where other issues take center stage. I encourage bright minds in the Duck audience to bring their talents to bear on this issue. Can incentives be aligned? Can global, bilateral, and minilateral processes change outcomes in range and demand states? Can publics in Asia be persuaded to change their behavior? Time is running out.

The “Future” of “Global” “Security” “Studies”