Clearly, Pew thinks this is a big deal. How do we know? They provided a one-click solution for anyone wanting to publicize the finding on Twitter: “Germans (58%) most likely to say their country should not defend NATO allies against Russian military conflict https://pewrsr.ch/Rus-Ukr2015”

That certainly sounds distressing. Is it true?

Unfortunately, we can’t tell. Because that’s not the question Pew asked. 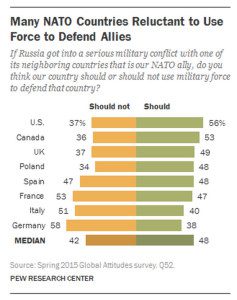 Pew’s question fails to specify whether Russia or its NATO neighbor initiated the conflict. I checked the questionnaire (PDF), and the wording is the same as the graphic and not the text of the report:

This matters. Article V only obligates NATO members to intervene in response to aggression against another member state. It does not require signatories to come to the assistance of NATO members that initiate conflicts. In other words, Article V is a collective-defense provision, not a collective-entrapment one.

Now, I think it entirely possible that a large number of those polled would answer similarly if asked the question that Pew, and the rest of the world, cares about. But we can’t know that. Any number of factors might systematically influence how respondents interpreted the question in different countries.

This is really quite frustrating. Not only because Pew misreports its own survey, but also because a simple tweak to the question would have made the results much more informative.

UPDATE: as a number of people have pointed out, my use of the term “intervene” suggests that Article V requires NATO members to use force in the face of aggression against one of their own. It does not. It reads, in part, that members “will assist the Party or Parties so attacked by taking forthwith, individually and in concert with the other Parties, such action as it deems necessary, including the use of armed force, to restore and maintain the security of the North Atlantic area.“