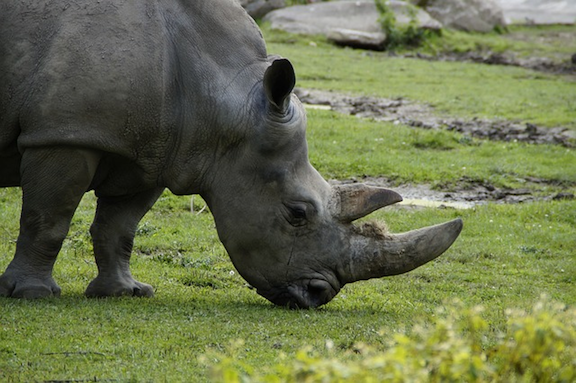 In my last post, I reacted to a Foreign Affairs piece that suggested lifting the ban on rhino horn, as South Africa has toyed with in the lead up to the 2016 CITES meeting it will host. Whether or not this would be a one-off sale like the one for ivory in 2008 or more of a permanent lifting of the trade ban is uncertain. A committee in South Africa is currently reviewing evidence and accepting testimony on the topic. Though South Africa is home to nearly 3/4  of the world’s remaining rhinos, lifting the ban in some capacity  would require 2/3 of the voting members at CITES’ approval. In this post, I review some of the main arguments advocates have mustered to oppose legalization of the trade, with which I largely concur.

I admit that the current situation is untenable, but I’m not convinced that the legalization argument is politically or substantively wise.

What is the political argument against lifting the ban?

It’s not going to  happen. Getting 2/3 of the countries in the world to approve lifting the ban in 2016 is a heavy lift. Will Travers of the Born Free Foundation makes a pretty strong case that this legalization discussion is a non-starter and counter-productive:

“Let’s say SA does put through its proposal, and that it has a central selling organisation as part of its proposal with lots of safeguards built in. Perhaps there’s even some designated trading partners. That has to be approved by 66 percent or more of the attending parties to COP17. In total, there are 180 parties to Cites. But let’s say 160 parties turn up at the meeting.

“That means SA will have to get 107 votes for that to fly. At the moment, my understanding is the EU is against trade. That’s 28 votes. I don’t think the US is going to take it. Australia is going to say no. Kenya too. There’s a whole raft of countries against. We only have to tip up to 55 votes against, and the blocking minority prevents it.

“You know what I’d say to SA? ‘Don’t bother. Don’t do it.’ It’s hugely embarrassing to go to the conference and get 30 votes on the table. It’s happened in the past where people walk out sweating and feeling ill. And you’re the host country.

What are the substantive arguments against lifting the ban?

Save the Rhino argues against a one-off sale, based on difficulties of tamping out the illegal trade:

Firstly, a one-off sale would create huge difficulties in terms of distinguishing illegal from legal horns circulating in the market. There are fears that without stringent monitoring a legal trade could serve as a route for the illicit trafficking of rhino horns. If the current high levels of corruption and illegal trade cannot be managed, it doesn’t provide much hope that a legal trade could be controlled.

Their second objection was that the trade could encourage demand:

Over the past few years, increasing wealth in Asian countries, mainly Vietnam, has led to a soaring demand for rhino horn. Rhino horn is no longer used just in Traditional Chinese Medicine, with a wide range of different user groups now using rhino horn. These include wealthy business men using rhino horn as a status symbol and others who believe in its ‘magical’ cancer-curing properties or usefulness as hangover cure. We do not know whether the legal sale of rhino horn will create new user groups, if the social stigma of buying an illegal product is removed.

A third concern is that some buyers will stockpile rhino horn based on the belief that rhinos will go extinct and they can cash in:

There is a risk with a one-off sale that large buyers would choose not flood the market with rhino horn (thus driving down price), but would instead stockpile or bank on the species’ extinction, in order to drive up the price of rhino horn. Frustrated users would therefore continue to rely on poached horn.

The African Wildlife Federation for its part notes the small numbers of rhino and the huge numbers of potential demand in Asia, where the bulk of the demand has come from. Legalizing the demand would seemingly endorse the notion that there are medicinal properties in rhino horn, which is made out of keratin, the same stuff as fingernails, consumption of which simply is not a curative for anything.

There are fewer than 25,000 rhinos remaining in Africa, compared to the tens of millions of existing and prospective rhino horn consumers in demand countries such as Vietnam, a country of 90 million, and China, a country of 1.4 billion. Hence, there is no realistic scope for achieving a sustainable balance between the supply of and demand for rhino horn.

What’s more, there is evidence that demand reduction campaigns can work so sending mixed messages by legalizing the trade, even as a one-off, could send the wrong message. Again, from Save the Rhino:

Recent history has shown us that demand reduction in Asia is possible and has been successfully achieved. From the late 1970s to the mid-1990s, most rhino populations were ravaged by phases of intensive poaching to support the traditional rhino horn trade for medicine in Asian and jambiya handles in Yemen. However international outcry at the poaching crisis led to the main user countries – Japan, Taiwan, South Korea and Yemen – implementing trade bans, government action, and successful awareness campaigns. By the mid-1990s these demand reduction strategies began to have an impact. For 16 years, between 1990 and 2005, rhino poaching losses in South Africa averaged just 14 animals each year.

So, are their any potential counter-replies from advocates? In my next post, I’ll bring up one based on the experience of the 2008 one-off ivory sales.

Additional Arguments Against Legalizing the Trade in Rhino Horn Pt. 3