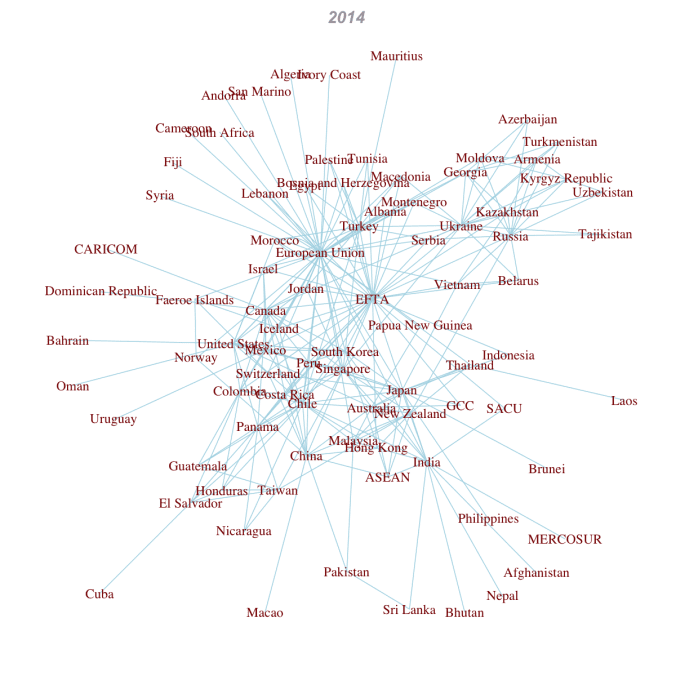 What’s at Stake in TPP?

President Obama’s difficulty in convincing Congress to grant him authority to negotiate the Trans-Pacific Partnership without legislative amendment is a serious setback for his foreign policy agenda. Most commentary on the subject has focused on the trade deal’s likely economic impact — which are not negligible, most importantly for Asian partners like Vietnam, but likely won’t impact the US in discernable ways. Others discuss its geopolitical significance in breathless, but vague, tones. Take this recent NY Times article:

“If this collapses, Pacific Rim countries will be aghast,” said Shunpei Takemori, a professor at Keio University in Japan, the largest economy in the would-be trade zone after the United States. “China is pushing, and if the U.S. just stands aside, it would be a tragedy.” …

As it happens I am working with Sam Brazys of UC-Dublin on some research examining preferential trade agreements in systemic context. What does “systemic” mean, for us? Most studies of PTAs focus on the dyad as the relevant unit of analysis, and look for factors that make it likely that a PTA is created between two economies. Sam and I are treating all PTAs as comprising a global structure, which we render as a network. We believe this is appropriate for a number of reasons, not least of which is the fact that governments view their PTA portfolios holistically rather than as a collection of independent agreements; that’s how China’s Ministry of Commerce portrays their agreements, for example. Methodologically, we believe that the formation of a PTA is conditioned by the existence of prior PTAs. If this is correct, and observations of PTAs are not statistically independent from others, then studying them as if they were independent dyads is very likely to yield biased results. 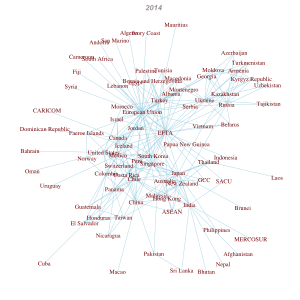 It is a system clearly organized around Europe, which is one reason why the Obama administration is also pursuing closer ties to the EU through the Transatlantic Trade and Investment Partnership (TTIP) deal. The EU and EFTA (European Free Trade Area, comprising Iceland, Norway, Switzerland, and Liechtenstein) are the most prominent nodes in this network. But there are other clusters that are visible: former communist countries in Europe are tied together, as are many economies in Asia and Latin America. The United States is not poorly positioned within this structure, but it is relatively isolated from it certain communities within the network such as Asia. The US’s position is more evident when looking at some measures of centrality (sorted by size). First, here’s degree centrality, which simply adds up all of the connections a country has in the network: 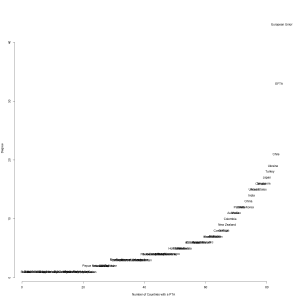 The US is slightly more prominent than India by this measure, and less prominent than countries like Singapore, Turkey, and Ukraine. Alternative measures of centrality reinforce a picture whereby the US is lags behind others in the global PTA network. Here is a graph with eigenvector centrality (higher scores means a node is well-tied to other well-tied nodes) on the x-axis and betweenness centrality (higher scores means a node provides pathways that connect otherwise-disconnected nodes) on the y-axis: 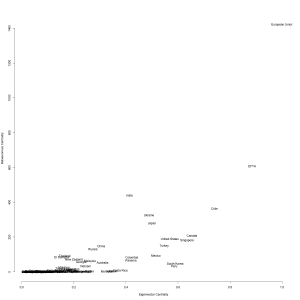 Again: Europe dominates, while the US is in the middle of the pack. Just for fun, I recalculated these statistics to see what the network would look like if TPP was enacted. Here’s the basic degree centrality: 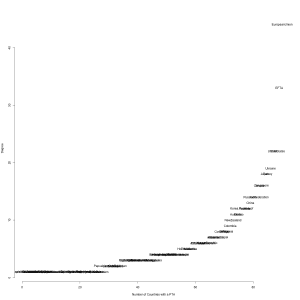 The US becomes tied (with Chile, another TPP party) for third-most important in the network, behind only the EU and EFTA. And here’s what the eigenvector and betweenness centralities would look like: 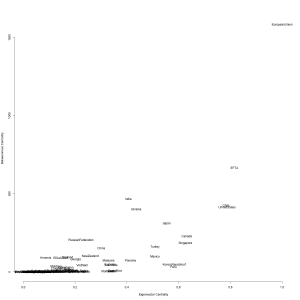 The US most noticeably improves in the eigenvector score (it moves further right down the x-axis), indicating that TPP would allow it to be more closely tied to the best-tied countries in the system. It also increases in terms of the numbers of paths it provides to connect otherwise-disconnected countries (it moves up the y-axis). Overall, it becomes around the third most-important node in the network, and it would become much better tied to a region — Asia — that it is relatively isolated from now. These ties will become increasingly important as Asia captures a greater share of the global economic, demographic, and security structures.

Why does this matter? Prominent nodes in networks are capable of influencing others. In this case, it would mean that the US would have a much greater role in determining how the global trading system develops over the coming decades. This has implications for the extent to which the US’s preferred policies on a host of issues that go beyond simple economic gains — labor rights, environmental standards, product safety codes, etc. — are on the global agenda. It will make it more difficult for China to pressure its neighbors into over-reliance on partnerships with China for their prosperity and, perhaps, security.

So in terms of US foreign policy strategy passing TPP is practically a no-brainer. Which is probably why Obama is pushing so hard for it, despite his past ambivalence towards trade deals like NAFTA.

The Threat of the BDS Movement

Much Ado About Nothing (Very Intellectually or Politically Important)?