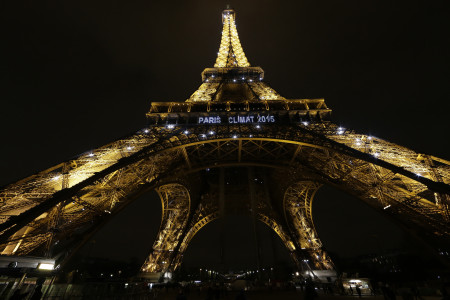 Sarang Shidore and I have a new paper for the Paulson Institute on what the US can do to encourage China to do more on climate change (in English and Mandarin).  China recently reaffirmed its pledge to peak emissions around 2030 and to increase non-fossil energy to 20% by the same year. China also announced a new target to reduce CO2 emissions per unit of GDP (its carbon intensity) by 60 to 65 percent below 2005 levels. How can the US ensure that China sustains and even accelerates progress in this direction?

The US has limited leverage over this domestic dynamic in China, but we identify 4 strategies the US can engage in to make it more likely that China will choose policies that produce co-benefits for climate change. These include: 1) the US keeping its own climate commitments (2) fostering transparency through research partnerships (3) pursuing complementary processes to the UNFCCC and (4) considering border tax adjustments.  Let me say a bit more about each one of these ideas.

1. Keep Its Own Climate Commitments

We shouldn’t overstate the important of this dimension. China’s climate commitments have their own momentum and logic, independent of what the US does. China wants to avoid being perceived as a climate scofflaw. Climate goals may serve to help support China’s effort to rebalance its economy away from heavy industry. Still, failure by the US to implement its climate commitments would strengthen the hand of those in China hostile to more aggressive actions to address climate change. Here we write:

If the United States suffers significant setbacks in implementation, whether legal or political, China’s leadership will likely have less incentive and political cover to stay the course on their own costly measures that will yield GHG reduction benefits.

The logic underpinning this of course is that China won’t have an incentive to stay the course on climate change if other major actors are not prepared to do their fair share. This would make China’s efforts self-defeating, and the inaction of other major emitters has been the same political if not substantive reason those opposed to action in the United States have offered for not doing anything. Here, we flag US commitments to the Green Climate Fund, actions on hydrofluorocarbons, methane leakage standards, and, most importantly, the rules on emissions from new and existing power plants.

China will still have strong domestic incentives – energy security, air pollution, economic rebalancing – to continue its current trajectory of policies that reduce its carbon footprint, but some of these objectives could be achieved by policies that make the climate problem worse. My sense is that the speed by which China’s coal and greenhouse gas emissions peak are still up in the air. China might go faster, and uncertainty over the US commitment to action on climate change might matter on the margins over whether or not that transition happens sooner.

The climate regime has evolved to one what analysts used to call “pledge and review” where countries make pledges of what they are prepared to do and other countries then subject them to international scrutiny. Many countries, including China and the United States, have made their pledges, so-called Intended Nationally Determined Contributions (INDCs). The problem is as David Victor noted, Chinese isn’t all that keen on the scrutiny part:

But it’s not surprising to me that within a large negotiating group of 196 countries, they won’t actually agree on formal procedures for how to review pledges. Especially when a lot of countries don’t have much confidence in how this review would work. Will you have UN inspectors traipsing around China, checking to see if they’re complying? A lot of countries are wary of agreeing to rules on this in a large forum.

While the US negotiators have talked about the importance of “sunlight” and subjecting these commitments and actions to external scrutiny, they also realize that Paris isn’t the only opportunity, venue, or process to generate it. We shouldn’t expect an especially ambitious or robust Measurement, Reporting, and Verification (MRV) regime to come out of Paris. The Europeans want a strong regime but China is reluctant, and the US isn’t going to allow the whole agreement to fall apart over this issue. 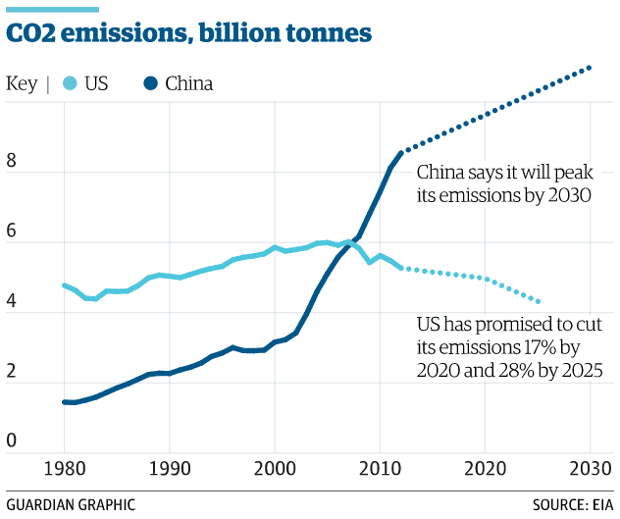 This is where outside research groups come in. As The New York Times reported:

But already, a number of research groups and universities expect to crunch the numbers of the plans, producing apples-to-apples assessments. The hope, negotiators said, is that as the numbers and commitments of each country are publicized, compared and discussed, countries will be shamed by the spotlight into proposing and enacting stronger plans.

Indeed, as Sarang and I note in our paper for Paulson, there are many joint US-China research groups already actively engaged on climate and coal-related initiatives that are helping China understand when it can realistically peak coal use and in turn greenhouse gases (see below for some examples). 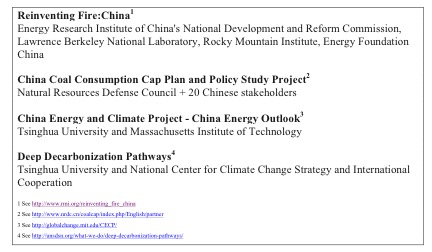 China has embraced technical support from the US in the past to develop an inventory of its own greenhouse gas emissions. Indeed, when the US has made access to its markets conditional upon inspections, China has even allowed inspectors from the FDA to be stationed in China. However, as I argued in a previous paper for Resources for the Future, elevating MRV to internationally diplomacy is a non-starter.  The US rightfully in our view seems to understand this.

As we argue in this paper, US support for research initiatives could help bring “sunlight” to China’s actions without triggering diplomatic blowback and at the same time shed light on the climate implications of actions meant to address air pollution:

But more important, such research projects could also help the Chinese government understand the GHG implications of pollution control projects, such as coal-to-gas or translocation of coal plants to the Chinese interior. Moreover, these groups would be well placed to share best practices on the basis of international experience or even pursue collaborative energy and pollution projects modeled on the CERC’s Technology Management Plan process to navigate concerns about intellectual property.

3. Pursue Complementary Processes to the UNFCCC

While the US should get as much as it can through the UNFCCC process, there may be other attractive opportunities to make progress on climate change with China. The U.S. has already seized the initiative on this through the potentially historic bilateral agreement that was reached last fall on the cusp of the APEC meeting.  Here, we identified two other possible processes that might be worth pursuing. The transparency regime might best be pursued through the International Energy Agency (IEA), which has the experience of doing data collection on energy and environment. China is not yet a member of the IEA which requires OECD membership and is generally reserved for advanced democracies. Now is probably the time to consider an IEA constitutional revision to allow for Chinese membership in the IEA, which would give them a seat at the world’s premier energy agency, all the more important given that the future of energy demand is going to come from Asia. While IEA rules on strategic petroleum reserves might prove a disincentive for China’s aspirations for membership in the IEA, China may find the reputational and practical benefits of IEA membership sufficiently persuasive to want to join. The IEA in turn could prove to be a more compatible vehicle for reporting and data collection on energy and emissions.

We also suggest APEC could be an appropriate  forum to begin to document the wider regional  implications of China’s air pollution that extends beyond its own borders. Similar discussions at ASEAN on forest fires and in Europe on transboundary air pollution in time crystallized in to regional legal instruments to try to address those problems.

We close with a more controversial argument that the U.S. should consider implementing border tax adjustments which would require some national effort to put a price on carbon. Countries that did not have a sufficiently high carbon price of their own  would be subject to such a border tax for products they export. Those that did would not. China is already moving towards a national carbon market in 2016 so if the price signal were strong enough, China could conceivably be an inaugural member of what William Nordhaus has called a “climate club:”

The agreement envisioned here centers on an “international target carbon price” that is the focal provision of an international agreement. For example, countries might agree that each country will implement policies that produce a minimum domestic carbon price of $25 per ton of carbon dioxide (CO2). Countries could meet the international target price requirement using whatever mechanism they choose—carbon tax, cap-and-trade, or a hybrid. A key part of the club mechanism (and the major difference from all current proposals) is that nonparticipants are penalized. The penalty analyzed here is uniform percentage tariffs on the imports of nonparticipants into the club region. Calculations suggest that a relatively low tariff rate will induce high participation as long as the international target carbon price is up to $50 per ton.

While people in the past have suggested this idea would lead to a catastrophic trade war between the US and China, we note that a number of analysts, namely Jennifer Hillman (a former member of the WTO Appellate Body),  have suggested that if enacted in a non-discriminatory way, border tax adjustments could be WTO compatible. More importantly, we argue that the U.S. and China have entered a time in their relationship where there are areas of agreement and disagreement, that the two countries are mature enough to be able to withstand areas of discord even within the climate space. US disputes with China over solar subsidies did not stop the two countries from reaching landmark agreements on HFC phasedown or wider climate cooperation. Pursuing border tax adjustments would merely reinforce China’s incentive to do what it wants to do anyway with a national price on carbon.

Together, these ideas might help the U.S. ensure that China’s policy announcements are accompanied by commensurate action and that policies China acts to address the more salient threat of air pollution reinforce climate goals rather than undermine them.

Gearing Yourself Up For the Academic Job Market: Waiting