I never thought that when I started grad school I’d be relocating to another country. Then again, when I got the job in Canada, it did not really occur to me that I was “really” leaving the US – on my previous visits to Toronto, everything felt pretty familiar. Plus, as a scholar of transnational activism, borders were supposed to be made increasingly irrelevant. I still remember the moment the border agent stamped my passport and glued the work permit into its folds.  I had actually crossed a border for my job – politically, socially, and culturally.

While many things are the same, functionally, between the US and Canada in terms of academic life, here are a few things that I’ve noticed in my time in Toronto, some of which perhaps resonate with other abroad-Americans here and elsewhere.

Many Canadians have a very mixed-up way of relating to Americans.

There is so much empathy for the US way of life that it leads to very polarizing feelings and responses. Many of my students are what we might call political junkies … of American politics. For example, when Obama was elected in 2008, I happened to have my IR lecture the next day. The hootin’ and hollerin’ in the lecture hall surprised me – it was almost like Obama was now their president, too. Broadly, I think this is true as well. In my spin class after the epic decision in Obergefell v. Hodges, my instructor (Canadian) gleefully announced to a roomful of (who I assume to be largely Canadian) giddy and sweaty people that marriage is now a right for everyone. Last I checked, same-sex marriage was legalized in Canada in 2005 with the Civil Marriage Act, and SCOTUS’ rulings stop at the border.

At the same time, there is an explicit rejection of Americana. Many of my students rebuff what they understand as American hegemony (i.e. excessive military spending and reaching abroad), even as they generally agree with peacekeeping as a concept because of the historical contributions of Lester Pearson. But even as Canadian Forces are employed in ways very different from peacekeeping missions, the idea that the US is an overreaching hegemon and Canada is the good-willed, public goods provider for peacekeepers in the world, is an enduring image. I find many students cling to that image of Canada when they reach university, even though the official narrative at the  Canadian War Museum belies this image with its focus on Canada on the battlefield (the peacekeeping section is one small room). 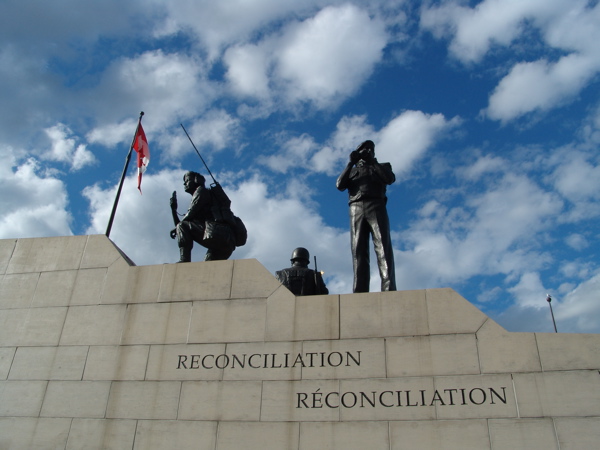 The Canadian academy is more diverse than the US one…maybe.

Experientially, I think that this is true. Certainly, more critical perspectives are widely accepted in Canadian discourse, and talking to colleagues at other universities, this seems to be the case. Contributing to this feeling of diversity is also the fact that French, along with English, are the two official languages of Canada. The top journal in the field here, the Canadian Journal of Political Science, is bilingual. There are other ways that show how representativeness and distribution are important, such as the geographical representation in national grant (SSHRC) committees. Recently, Steve Saideman has done an extensive study of the Canadian IR academy using TRIPS data. He shows that “The Big 3” – Toronto, McGill, University of British Columbia – are substantively different from the rest of Canada, which has long been common wisdom. The Big 3 tend to have more positivist faculty than the rest of Canada because three-quarters of us are trained in the US (!). But like the rest of Canada, the Big 3 lack quantitative scholars and shares a number of other qualities that make it “more like” their Canadian peers.

So this was the biggest practical shocker. At Toronto, we teach year-long courses on a regular basis for both introductory and advanced topics. Perhaps as a result of graduate work on a 10-week quarter basis, I still find it challenging to make the switch to the 24-week course structure. At first, I thought this would be a great opportunity for me to explore topics at a leisurely pace, taking the time to cover pet subjects and atypical topics. In reality, for me, the year-long system drags. That lag that happens during a semester of 14 or 15 weeks? It gets much longer in a year-long system. Attendance starts suffering. Any classroom concerns that are not easily rectified (e.g. untalkative students, disruptive and large lecture halls) become more and more onerous. Very often, I feel tired not just of the framework I enthusiastically instilled at the beginning of the course, but also of teaching the same course, even if it is material that is very near and dear to my heart. I am a big fan of starting over after a break from the holidays, bouncing into a new room and new materials, syllabi in hand.

So there you go – notes from a move abroad. In many ways, things stayed exactly the same, but it’s surprising the number of things that are different.