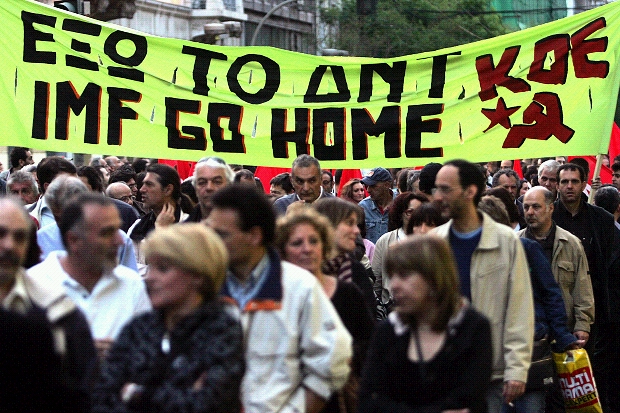 According to the NY Times, the IMF has refused to participate in any new bailout program for Greece unless Hellas is receiving debt relief. Specifically, says the IMF, this relief must come in one of three ways to be determined by Greece and the Troika: reducing the amount of principal debt to be repaid (“writedowns”), extending the term of the loans (the IMF suggest no payments for 30 years), or interest rate subsidies that would allow Greece to repay its loans at rates substantially below their market value. In practice part of the debt (around€100bn) was already discharged in 2012 via debt swaps that amounted to writedowns. And some of the third and a bit of the second were already being done under the old bailout regime, and both would have been part of the new agreement reached last weekend as well.

But those are less than half-measures in the face of an onrushing avalanche.

Nearly every serious observer has argued that much more needs to be done to resolve the debt question, and in fact will be done no matter how this is finally settled. Despite already receiving maturity extensions — Greece’s average debt maturities are now the longest in the eurozone, by far — Greece’s debt service ratio may be as high as 15% of GDP per annum. It really needs to be 2-3% of GDP or lower to be manageable over the medium-run.

Many have found it odd that the IMF is the one pushing for laxer terms on Greece. After all, the IMF is emblematic of “neoliberal” structural reformers the world over. But those who have been following this crisis since 2008 have long known that the IMF has been the most moderate member of the Troika (which includes the European Commission and European Central Bank). Indeed, the IMF has been criticized from the left for being hypocritical: when countries in the emerging world get into trouble they bring down the axe, but when more developed countries in Europe need finance they push for more generous terms. (That explanation makes little sense when its first-world funders are engaged in tightening the screws.)

So how can we understand the IMF’s position today? Three possibilities emerge from the academic literature.

The first way to think about the IMF is to place its policy preferences in the context of the US’s interests. Lots of studies show that the IMF lends more favorably when the US wants it to do so and less favorably when it doesn’t. I briefly summarized some of that literature a few years ago:

There is quite a lot of political economy research on the IMF. None of it concludes that it is an impartial technocratic institution. It is involved in power politics, generally in ways which benefit US interests. It lends in a way that benefits the American financial sector. It trades lax conditionality for UN votes on the Security Council and in the General Assembly. It adjusts conditionality requirements based on the recipient’s geopolitical importance, and enforces conditionality more or less strictly based on a country’s ties to major powers. This is but a small sampling of the literature demonstrating that the IMF is a political, and politicized, institution. It acts in the interests of the major stakeholders in the major powers, especially the United States (which is the only country which possesses an effective veto on IMF funding decisions). The IMF is not on a relentless pursuit for the Most Optimal Policy as determined by the economists’ imagined technocratic Benevolent Social Planner.

What do we know about the US’s preferences involving the eurozone crisis? It is understandable why in the past few months the US has expressed its desire for the EZ crisis to be resolved, sooner rather than later, in the context of Russia’s encroachment on Europe (including the Balkans, perhaps), the TTIP negotiations, the creation of the AIIB, and as a simple matter of encouraging continued economic and financial recovery. The US has ramped up these calls recently, and it of course allowed the IMF to release successive documents suggesting that Greece’s debt burden was unsustainable. So it could be that the US is using the IMF to pressure Europe into writing down some of this debt. The US doesn’t usually directly challenge its allies and and other major powers through the IMF, but there is precedent.

Why it might be useful or necessary for the US to deploy the IMF in this way brings us to the second way to think about the crisis: the IMF can provide domestic political cover for leaders trying to navigate a crisis. The IMF itself sees its role in just this way. Usually we think about this as providing political cover for leaders of indebted states to make needed reforms that hurt powerful domestic interest groups, as I did in 2010:

Let’s think about the Greece situation in this way: if Greece installs an austerity program in exchange for loans from Germany, then voters who dislike the plans in Greece and Germany know exactly where to aim their disapproval: incumbents. But if Greece is required to install an austerity program in exchange for an IMF loan — even if the IMF loan is funded by Germany — then domestic political leaders can argue that they had no choice in the matter: the Big Bad IMF made them do it. In this case, as it often is, opacity is a good thing for leaders enacting unpopular reforms, and including the IMF can muddy the water.

But there is no reason why this could not happen in reverse if the leaders of Finland, Germany, and others do not wish to face political repercussions for allowing Greece to default on debt owed primarily to taxpayers in creditor countries. Would you want to be the leader to tell your taxpayers that they’d given away their money for nothing? Me neither. But if the IMF — possibly under pressure from the US — insists on it then that changes the political optics. Particularly since the IMF is still perceived to be the Darth Vader of global finance. Sometimes being loathed has its advantages.

The third way to think about this is related to the second and first: allowing some form of debt relief only under pressure from the IMF maintains the credibility of Europe’s commitment to fiscal sovereignty. That is, Portugal and Spain cannot simply ask for debt writedowns just because Greece got one if gaining IMF support is a prerequisite. Nor will countries be incentivized to “pull a Greece” and destroy their domestic economy in order to get such a writedown, because the consequences are too dire. The IMF is not pre-committing European leaders to any future action. No real precedent would be set.

(Of course, the IMF has not volunteered to have the money owed to the Fund be forgiven first — which it cannot legally do, under its charter. It is still the super-senior creditor who will (or should) be repaid first.)

That doesn’t mean it will work. The non-IMF parts of the Troika have been reluctant all along, and clearly some parts of them (and the polities they represent) wish for Greece to exit the euro and thus will support no relief. But another way to think about this is that debt relief is definitely acceptable under some conditions, as Grexit would be immediately followed by a full (or near-full) default:

Srsly, if you spent months calling € an austerian disaster & saying Greece should leave, Schaeuble is your guy, making your case. own him.

So while it isn’t clear whether these actions taken by the IMF will win out in the end, there are plausible political pathways for it to help. If you support some amount of debt relief as part of a final package — which will come, one way or the other — then you should be glad of the IMF. What’s the expression? “Politics makes strange bedfellows”?

[UPDATE (7-16-2015, 1:00 a.m. ET: The Guardian provides some small support for the idea that the US is mobilizing the IMF to pressure the Troika into making concessions. No clear evidence yet, but the idea is at least plausible.]

Institutional Aspects of the Iran Deal