Confidence and Gender in International Relations

The following is a guest post by Rachel Merriman-Goldring, Susan Nelson, Hannah S. Petrie at William and Mary’s Institute for the Theory & Practice of International Relations.

For decades, survey research has suggested that women lack confidence in their answers, responding ‘don’t know’ or ‘maybe’ at significantly higher rates than their male counterparts. Initially, this trend on political surveys was attributed to topic-specific political knowledge gaps between men and women.

However, recent research, including a study on the confidence gap between male and female economists, suggests that, while background knowledge matters, other structural factors, including gender-differentiated socialization, may contribute to women’s tendency to select ‘don’t know.’

Our work on the Teaching, Research, and International Policy (TRIP) Project at the College of William & Mary provides us with access to a unique database of survey responses from International Relations (IR) scholars, most of whom hold Ph.D.s in political science.

Over the past 14 months TRIP has conducted 6 snap polls consisting of 43 questions with ‘don’t know’ as on option. Women responded ‘don’t know’ more than their male counterparts on 39 of the 43 questions. Figure 1 provides a visual of this gap. 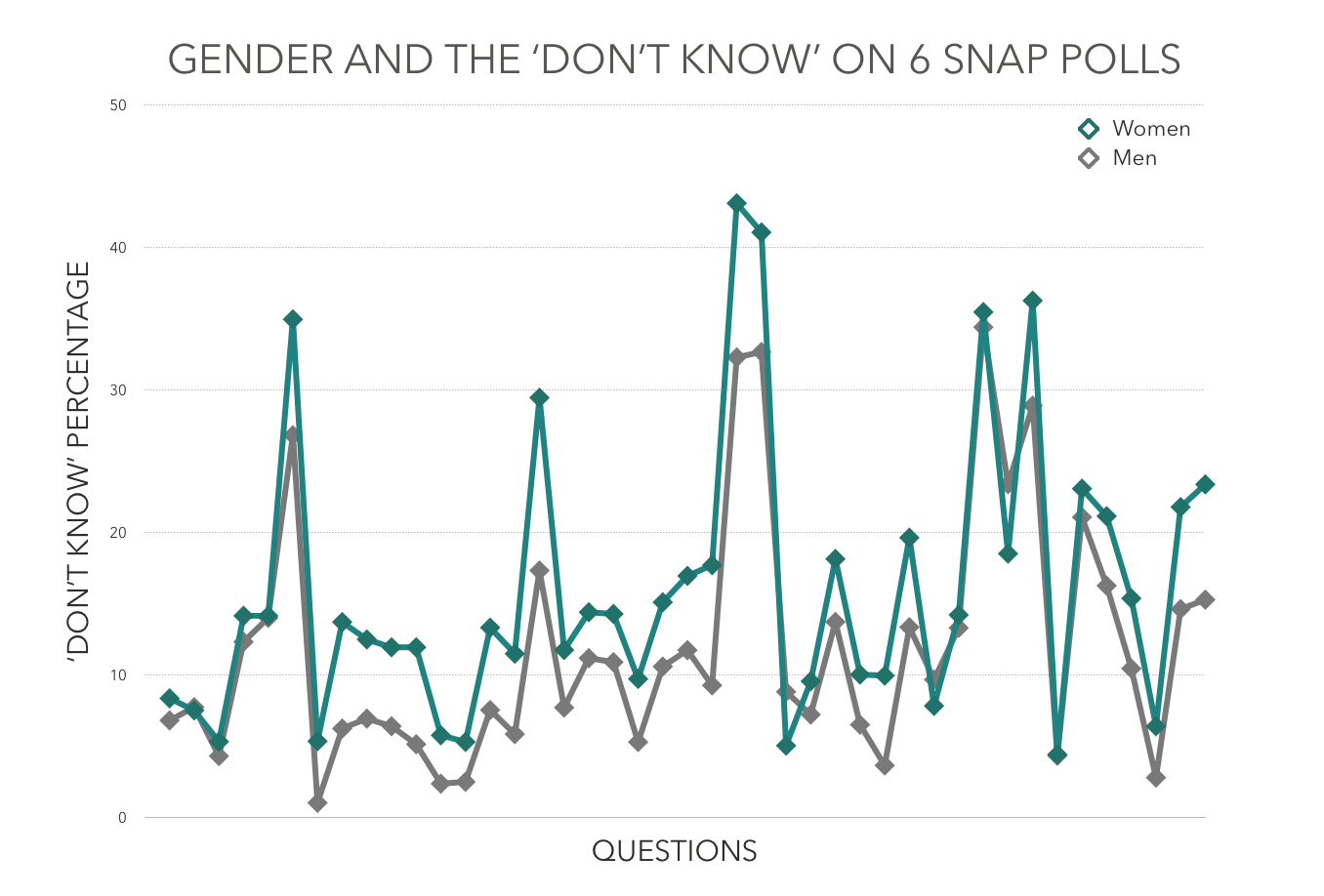 Questions on free trade agreements were especially revealing. When members of the U.S. public were asked about contemporary issues in IR, such as the Trans-Pacific Partnership (TPP), a proposed free trade agreement among Pacific Rim countries, and the Trans-Atlantic Trade and Investment Partnership (TTIP), a proposed free trade agreement between the United States and the European Union, women were more likely to select ‘don’t know.’ In response to questions about the effect of the TPP and TTIP on their financial situation, for instance, more than 39% of women in the general public chose the ‘don’t know’ option, compared to only 24% of men. Figure 2 shows the responses to both questions.

Figure 2 plots the responses of members of the U.S. public from WIPPO’s Snap Poll.  There is a statistically significant gap between male and female responses on questions about the two free trade agreements. 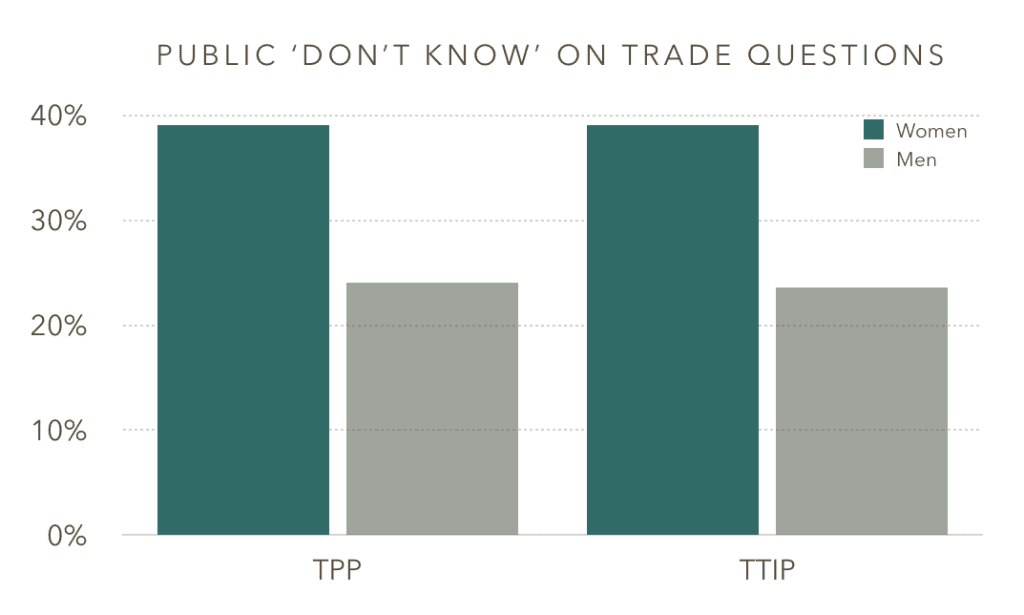 The confidence gap between men and women was only slightly narrower among IR scholars, even if the overall percentage of ‘don’t know’ responses was lower among these experts.   More than 22% of women said they didn’t know how the TTP and TTIP would affect their financial situation, while 15% of male scholars selected that response option. The gap in these responses is highlighted in Figure 3. 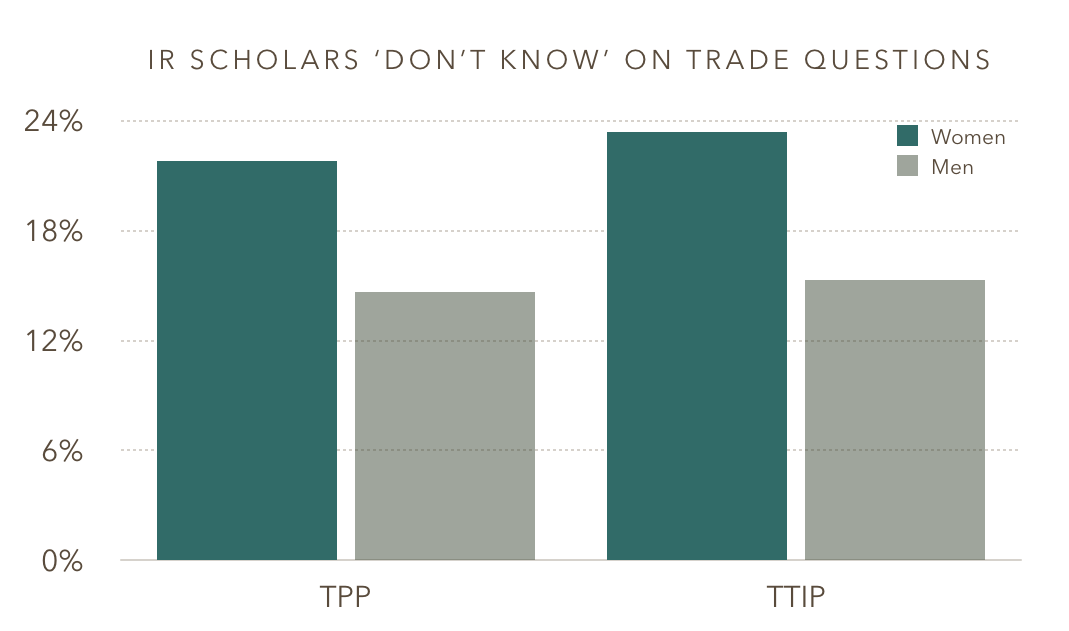 The persistence of the gap suggests that, despite significant steps towards gender inclusivity in the academy and beyond, structural factors like socialization continue to affect the ways women perceive and express their knowledge. This research contributes to a larger conversation on gender-based behavioral differences, including women’s tendency to apologize more frequently and female students’ propensity to speak up less frequently in the classroom.

This work shows that political knowledge is not a sufficient explanation for women’s tendency to select ‘don’t know’ more frequently. We explore potential explanatory factors, including differences among scholars (age, topical expertise, status within the discipline, etc.) and differences among questions (predictive, normative, descriptive, etc.) in our larger project on gender and confidence.