This is a guest post by Leila Kawar, Assistant Professor of Legal Studies at University of Massachusetts Amherst. She is the author of Contesting Immigration Policy in Court: Legal Activism and Its Radiating Effects in the United States and France (Cambridge University Press 2015) and a cofounder of the Migration and Citizenship Section of the American Political Science Association. In 2000-2001, she spent a year in residence at the Institut français du Proche-Orient in Damascus, Syria. 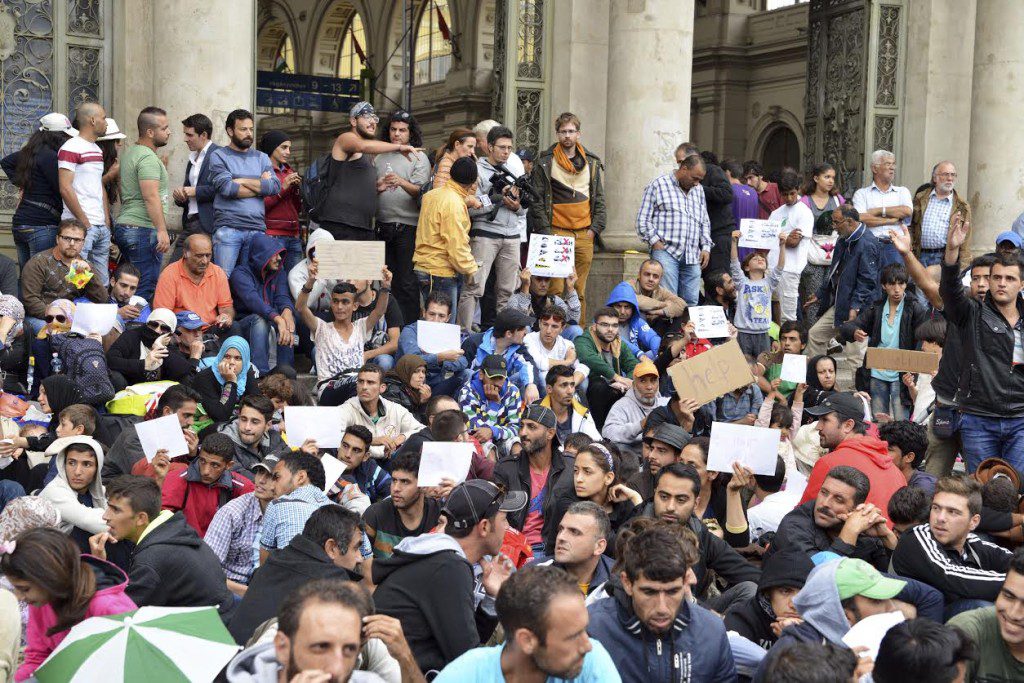 This summer, the ramparts of “Fortress Europe” were breached by a mass exodus undertaken by young Syrians, Iraqis, and Afghans. News coverage has described them as “migrants.” But I would argue that this term is a misnomer; rather than “migration,” what we are witnessing is a collective act of “protest” against the current governance regime that quarantines conflict outside of Europe’s borders.

In the contemporary European imagination, the term “migrant” is associated with individuals who arrive on EU territory, often without authorization, seeking economic opportunity. While there is some understanding that migrants’ home countries are often places of conflict, this turbulence is comfortably distant.

Of course, it is not that Europeans have no historical experience assisting large numbers of displaced persons. UNHCR was founded in the aftermath of WWII to help Europeans displaced by that conflict, and subsequently assisted Hungarians fleeing the 1956 Soviet suppression of their country’s democracy movement. In 1989, Europe witnessed another major outpouring of refugees from East to West.

However, in the quarter century since the fall of the Berlin Wall, migration control has assumed much greater significance the European imagination. The hardening of the external borders of the European Union has operated as the flip-side to Europeanization and has spawned an entire industry of border security professionals.

One important dimension of the consolidation of EU migration controls is that asylum processing has been effectively quarantined to countries on Europe’s southern and eastern fringes. In essence, EU policies over the past two decades have handed the countries of Southern and Eastern Europe the dirty task of policing the ramparts of this “fortress” in the making. News coverage of the alternating viciousness and ham-handedness of Hungary’s responses to the migration crisis, has tended to ignore the bigger picture of external border control and its placement within a broader EU policy regime. Yet as European Council President Donald Tusk has emphasized, Hungary’s Prime Minister has been taking action to “strengthen the protection of EU borders.”

Despite these concerted efforts to protect Europe from unauthorized foreigners, tens of thousands of young Syrians, Iraqis, and Afghans, some traveling with their families, have made their way into EU territory over the past three months. The UNHCR estimates the size of this summer’s mass exodus at 200,000 people.

This breach of Europe’s territorial borders is unprecedented not only for its magnitude but also in the extent to which it blurs the lines between two important policymaking paradigms previously kept separated. EU policymakers have been confronted with the question: Are those boarding boats in Turkey and trains in Eastern Europe “migrants” or are they “displaced persons”? In Europe, “migrants” have their claims for asylum or relief from deportation adjudicated on an individual basis; they fall under the jurisdiction of normal regulatory structures. By contrast, “displaced persons” are handled by states as an emergency humanitarian matter. The massive Syrian refugee camps in Jordan and Turkey fall under this latter paradigm.

What has happened this summer does not seem to fit cleanly into either of these categories. In part, this is the consequence of the sheer numbers of people on the move. Yet, in crucial respects, the characteristics of the Syrians, Iraqis, and Afghans moving across Anatolia, the Aegean, and southeast Europe set them apart from previous waves of migration. They are disproportionately young, educated, English-speaking, and tech-savvy. In images of “migrants” arriving in German train stations, we see members of the internet generation of Syrian youth. Their frustration with the status quo and creative use of social media fueled a brief period of free expression and protest in the spring of 2011 that ultimately proved too much for the Assad regime to tolerate.

Having abandoned Damascus to the elderly, these Syrian millenials are collectively refusing to have their futures destroyed along with their homeland. Until now, Europe has tended to treat Syria’s conflict as regionally cabined. But this is not how Syrian youth who grew up with the internet understand their situation. Together with young Iraqis and Afghans, they are relocating themselves en masse to places to which they have long felt themselves culturally connected via globalized media, technology, and consumer brands.

Hungary’s hard-line prime minister calls the human movement across his country a “rebellion.” Adopting a more humanistic lens, we can understand it as an act of collective protest, for which the border control apparatchiks of southern and eastern Europe are proving to be no match.

At least for the moment, this simultaneously perilous and dramatic form of collective action has proved uniquely effective in arousing sympathy among civil society groups in Western Europe (as well as among many who follow these developments at a distance). Some migrant advocates even express hope that political crisis can be turned into an opportunity for rethinking European migration policies.

Perhaps this is too hopeful. However, it seems clear that Europe’s understanding of the destructive (and largely externally-financed) conflict in Syria will not be the same after this summer. And for those of us who teach and study the politics of migration, it is a reminder that human movement can become a collective political act for those with few other means of political expression