… I would argue that, as scholars, we can and must do more.

What if we made a commitment to tell the story of Alan, his brother [correction: his name is Ghalib/ Galip in Kurdish], and mother Rehan who all drowned and his father Abdullah Kurdi who now has to go on without them (and who wants his tragedy to spur action)? 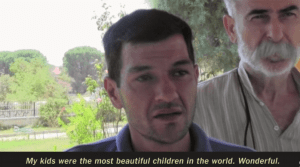 What if we used our knowledge of global affairs to connect the dots and lay bare how Alan’s story is also the story of the global community’s failure to successfully address the conflict in Syria? A story that also highlights anti-immigrant policies adopted by Canada (Alan’s aunt had been doing all she could to support his family and get them to Canada), a settler-colonial state that neglects its indigenous population? Alan’s death is also a consequence of U.S. foreign policy, first in destabilizing the region starting with the invasion of Iraq and incubating ISIS, and more recently supporting (albeit inconsistently) Turkish ambitions to prevent any Kurdish independence exemplified in the fight in Kobane, Alan’s hometown. His is a death that might have been prevented had there been some pathway to safety other than a dinghy. Let us remember, what it means to be a refugee (and how problematic it is to speak only in terms of migration, though that also quickly gets complicated [EDIT: see this great post on TDOT also that goes into some of the more technical details] ). As Warsan Shire exclaims, “you have to understand that no one puts their children in a boat unless the water is safer than the land” (click here to hear the full poem, really, do it!).

So, maybe there is ‘something’ that we can do indeed – let us tell the stories of all the children who died crossing the Mediterranean – and their parents, and grandparents, and aunts, and uncles. Let us use our knowledge of global politics to find out who they were and carefully disentangle how our policies influenced their journeys. Let those stories inspire us to offer a helping hand – but also to identify points of resistance and demand policy changes.