Russia, Syria, and the Costs of Inaction in Ukraine 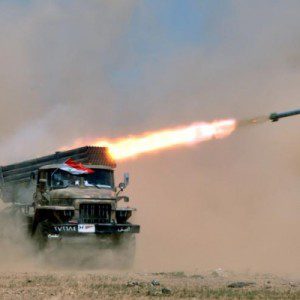 The ominous Russian military buildup in Syria represents the most significant projection of force beyond the territory of the former Soviet Union since the old Cold War. It will allow Russia to keep the brutal regime of Bashar al-Assad in power in Syria, effectively negating the new diplomatic path toward resolution of the regional sectarian war that has been opened up by the Iran nuclear deal.

In addition it will further enable Russia to build and retain a major forward operating base for Russian military forces. At first it will be used to keep Assad in power. Then, as a cover, Russia likely will initiate sustained use of force ostensibly against ISIS, but actually to act as if Russia is in vanguard with the West and Middle Eastern powers in combating the world’s most dangerous insurgent group.

Beyond this, there is little guarantee that Russia won’t use its most high end military weaponry in other destabilizing ways that are contrary to western interests, such as attacking U.S.-backed opposition fighters (alarmingly, Russian drone flights have been scouting those areas, not ISIS areas). Offensive hardware including fixed wing Su-24, 25, and 27 fighter jets, attack helicopters, drone aircraft, main battle tanks, and SA-22 surface-to-air missile batteries have already been deployed at Russia’s new base in Latakia Syria in the backyard of Assad’s stronghold.

With the U.S., Turkey, the Gulf States (and now the UK and France) already engaging in air operations against ISIS in Syria, can Russia actually be trusted to merge with this air campaign in a fully allied operational manner or will it stir up trouble in the process by not being cooperative, therein potentially endangering allied aircraft and pilots whether intentionally or unintentionally? Russia has been playing a dangerous cat and mouse game with allied planes and ships across Eurasia for many months already.

Another part of President Putin’s motivation for his Syria buildup is to use mild subterfuge to try to make it look to the rest of the world that Russia is being a “responsible” and contributing member of the world community just in time for the UN General Assembly in New York. While military to military talks are necessary and should continue for deconfliction purposes, President Obama should not meet with Putin at the UN. This will be perceived as additional weakness, and not just by the Russians.

In fact, the U.S. and its western allies should not have been caught so off-guard by Putin’s shrewd but destabilizing move. Since the Russia invasion and occupation of eastern Ukraine Putin has been poking and prodding the West, seeking ways in which a militarily and diplomatically resurgent Russia can subvert western security interests and force them to deal with it again as a major world power with its own unique set of interests that can be “legitimately” defended.

But the West is guilty of something even more blameworthy and directly harmful to its interests: it is largely to blame for this distressing Russian chessboard move. By not confronting Putin and Russia sufficiently over its illegal and unwarranted invasion and occupation of Ukraine, the U.S. and its western allies effectively gave Putin a green light to project force in other key geostrategic hot spots.

By being stared down by Putin over Ukraine and effectively blinking, the West lost its credibility in the eyes of the Russians: its ability to deter further destabilizing projections of Russian force evaporated in the process. But this was not considered by most western security experts, who myopically stayed focused on their views that Ukraine in and of itself was not worth fighting for. The wider strategic ramifications were ignored.

The major inside-the-beltway argument against arming Ukraine properly was that Putin would only up the ante, and therefore it would be ineffective. Actually the U.S. and its western allies would only have needed to do just that, up the ante further with an announcement of additional arms. More than likely, the mere announcement would have gotten Putin to back down.

The use of force is about the only form of statecraft Putin respects. Anything short of it, or the credible threat of its use, Russia effectively shrugs off. With the major social and public media manipulation it is carrying out inside Russia, Putin’s government has not been deterred from its foreign shenanigans by the seriously negative effect that western economic sanctions have had on Russia’s economy. It has been predictably impervious.

The West did do a better job deterring Russian incursions into other parts of Europe. The U.S. fairly rapidly provided security assurances to Poland and the rest of East-Central Europe, building up deterrence against Russia forcibly pushing into these former Soviet satellites in the process. But it blatantly failed to deter Russia from going much further in its invasion and destabilization of Ukraine. The most fundamental pillar of international law and civilization—nonviolation of sovereign borders–was torn down in the process.

The U.S. and Europe should have armed Ukraine. By not forcing Russia to stand down and respect Ukraine’s border and sovereignty—let alone give up its annexation of Crimea—it not only allowed bedrock international norms to be undermined: it squandered what modest deterrence had been in place at the time.

Once depleted, deterrence is decidedly difficult to build back up. Deterrence is even more crucial to sustain in the context of asymmetrical interests by opposing parties. In this instance Russia has a stronger set of interests involving Syria and the Assad regime compared to the U.S. (and Europe). Thus, as it is less likely to intervene directly, deterrence is even more vital for the U.S. to establish and maintain. It is both strategically effective and cost-effective, but it is difficult to establish and maintain and quite simple to lose.  At such junctures when the U.S. is either less able or less inclined to intervene in a given crisis, deterrence is at a premium.

And now the West has a significant new Russian forward operating base on its hands in a pivotal part of the world. The seeds of this buildup were sown when Putin deftly inserted himself into the Syria equation over two years ago when the U.S., UK, and France failed to enforce their no-use-of-chemical-weapons red line. But it was the failure to force Putin’s hand over Ukraine that emboldened him to make this newfound far-reaching move.

The U.S. had done itself a great favor by successfully negotiating the Iran nuclear deal.  Contrary to the sensationalist accusations coming from the current crop of U.S. presidential candidates, Iran has initiated two ceasefires in the war in Syria, backed down from supporting the Houtis in Yemen, and reined in the forward-leaning general of the Quds Force (the external arm of the Revolutionary Guards).  But already the U.S. is watching an earlier misstep come back to bite it.

With the advent of this preventable incursion into Syria, Russia has deftly changed the operating equation.  Bashar Assad will not be going anywhere soon. Nor will the war in Syria be winding down. And with Russia’s trademark unpredictability–a la the intelligence accord with our ally Iraq, Syria, and Iran– its choosing yet another place to subvert western interests is not a matter of whether, but when.