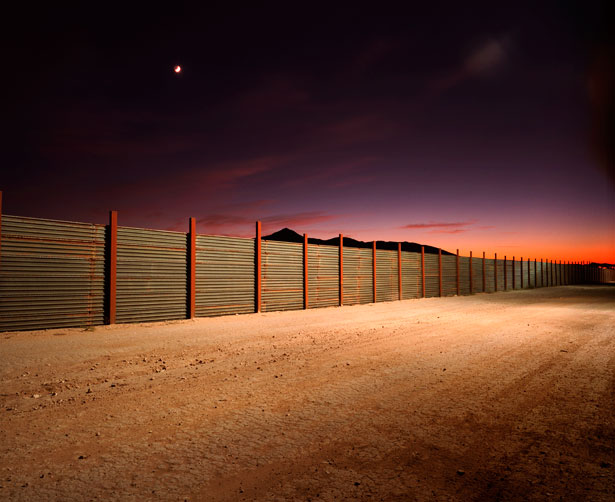 Securitization Theory and the U.S.: No entry?

The following is a lead piece for a forum discussing why securitization theory has had so little traction in American IR.  Drawing on established and emerging scholars from around the world, the forum will run from September 16th – 30th and feature guest posts every Monday, Wednesday, and Friday.

Two years ago Dan Nexon approached Eric, a graduate student, about organizing such a forum with the support of Patrick T. Jackson.  Dan and Patrick soon had to leave Duck of Minerva for International Studies Quarterly.  The project was put on hold until Eric met Jarrod at ISA in New Orleans.  What follows is almost certainly different from Dan’s vision, but if anything good comes of it, then it is in no small part due to Dan and Patrick’s early entrepreneurship.  Finally, both Eric and Jarrod are immensely grateful to the contributors for their time and their insight.

Foreign ideas don’t always go the distance. As Amitav Acharya (2004) has argued, outsider ideas always undergo a process of localisation when they spread. Local forces determine to what extent – if any – an idea can be adapted to domestic circumstances. When looking at the sociology of knowledge in IR finding an idea resonates with a particular region can be revealing, but equally revealing is when an idea is ignored or passed over. While these observations are as old as human society, when it comes to IR theory, they introduce implications that are ill at ease with the conception of IR as a social scientific enterprise. At least in the U.S., the ontological and epistemological underpinnings of IR as a discipline hold that theories are measured not by their foreignness but rather by their ability to explain the world. If that is the case, rejection of foreign theories is deeply problematic. Unless of course the claim is that the theory is invalid, but that begs the question why is it invalid in one place, but not in others?

It is in this context that we ask why securitization theory has had so little traction in American IR. Today monographs, journal articles, and conference proceedings discussing the framework abound, its original advocates occupy eminent institutional positions, and introductory textbooks to security studies typically contain at least one chapter on the approach. Yet in American IR securitization theory is the proverbial Polkaroo; seen by a few individuals but invisible to the broader community. It rarely graces mid-level syllabi for courses on international security. It is conspicuously absent from the increasingly constructivist literature on threat construction and inflation (e.g. Thrall and Cramer, 2009). And only very rarely does this work make an appearance in the top American security journals such as International Security or Security Studies. A quick search of U.S.-based ‘top-tier’ journals according to the 2011 TRIP survey makes the case. Using the keyword ‘securitization’ one finds the following results:

Contrast these trends with one European-based journal:

In short, EJIR has more references to securitization and more engagement with the theory than the four top-level U.S. journals combined by a large margin.

While our forum participants will focus on why the approach has had so little traction in the United States, and correspondingly why it has been so valued elsewhere, this intervention asks a more basic question: why should we be puzzled over the absence of securitization theory from American IR at all?

Of citation counts and impact factors…

In responding to Buzan and Hansen’s The Evolution of International Security Studies Steven Miller takes issue with their characterization of the history of the field. In the eyes of Miller, rather than being “dominant and hegemonic” members of the so-called traditional security studies “often feel weak and marginalized” (2010:260).* Thus, for many U.S. security studies scholars, the narrative of widening approaches, such as securitization theory, being an upstart challenger facing an entrenched goliath just doesn’t ring true.

Yet today Miller’s skepticism over whether alternative approaches, like securitization theory, can be considered an upstart challenger certainly hits the mark. The securitization literature has grown positively massive—at least in outlets and by authors outside the United States—with no signs of slowing down. One of the ways we can examine this is through citation counts which, while recognizably crude, speak to the impact of a scholarly work. 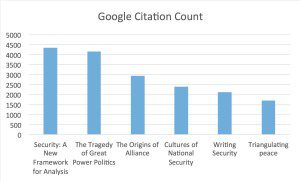 If we measured books on security in terms of the google citations they accrued then the Copenhagen School’s SNFA would be the most significant development in the field in the last twenty years, thoroughly eclipsing some more recognized mainstream works. Admittedly citations counts are dubious measures of value; a cited article can be an object of disdain and derision. Yet it’s not just citation counts that reflect this trend. Securitization articles are increasingly prominent in some of the top IR Journals outside the U.S., such as Security Dialogue, EJIR, and International Political Sociology. Like the distribution of power in world politics the distribution of citations does not determine everything, but neither is it easily dismissed.

From importing to exporting…

In an especially memorable line Lawson and Shilliam have compared IR scholarship to “Viking raiding parties with booty carried off in one direction and little to show for it in the other” (2010:80). In pulling ideas from economics, sociology, political theory, and other disciplines IR has shown itself to be little in the way of a net exporter of ideas. The point is not that we don’t ever create innovative and original ideas–we certainly do. The point is that many of the ideas we do create don’t hold much appeal for other disciplines. No one seems to be knocking the doors of IR departments saying ‘I think you might have some insight into this problem I’m working on’.

And yet the concept of securitization notably bucks this trend. One of us (Hayes), after giving a presentation drawing on securitization theory spoke with a biologist who mused on the possibilities securitization theory might hold for analyzing socio-political responses to ‘invasive’ species. In Lippert and Walby’s Policing Cities an eclectic group of sociologists, criminologists, and geographers use the concept to study transformations in the policing of major urban centres around the world. Admittedly, most of the time questions over how the politics of security transforms cities isn’t on the agenda for most mainstream IR scholars. Until it is, as in Walt’s concerns regarding overreaction to terrorist attacks. Indeed, while he does not mention securitization theory, Walt’s analysis of “our collective inability to keep these dangers in perspective and to respond to them sensibly” would be well served by it. Similarly, Holbraad and Pedersen’s Times of Security works to bring the concept to anthropology.** The point here is not to pass judgements on these works, but rather highlight a subtle irony in that other disciplines are seeing value in the concept that much of American IR itself remains ambivalent about.

It’s difficult to address the value of a theory these days without some kind of paean to policy relevance. Securitization theory arguably comes with multiple overlapping and complex visions of politics and policy.*** Still, numerous scholars have pointed to concrete policy implications. Stephan Elbe (2006:133), for example, has argued that framing HIV/AIDS as a national security issue may allow some poorer countries to override the patent laws of the WTO’s Agreement on Trade-Related Aspects of Intellectual Property Rights and allow access to cheaper retroviral drugs. Maria Mälksoo (2015) traces how state policies of remembrance and so-called ‘memory laws’ within Eastern Europe feed into contemporary security dynamics such that one state’s rituals of memorialization come to be interpreted as dangerous by another. As America’s presidential contenders debate how to remember the 2003 Iraq War, and the kinds of policies this enables, it’s difficult to dismiss the relevancy of this kind of research. Relatedly, there is a broadly based agreement in this area of work “that the changes directly linked to the securitization of immigration have precipitated general policy failure” resulting in everything from the curtailment of civil liberties to the driving away of economically desirable migrants (Messina, 2014:546). Jarrod Hayes and Janelle Knox-Hayes (2014) have used securitization theory to analyze policy failings with respect to climate change. At the end of the day not everything done under the banner of ‘securitization’ will immediately qualify as ‘policy relevant’ but then again one could make the same argument for the rest of the field.

Looking for a realist constructivism?

Ever since Barkin’s (2003) call for a realist constructivism – and likely for some time before – there has been a distinct desire for a constructivism that is less enamored with the steady progression of human rights and more attuned to the role of power within social interactions (see also Jackson and Nexon, 2004). The problem here is not with a vision of politics as socially constructed and historically contingent but with a wedding of these view to a liberal idealism that envisions international politics as inherently progressive (Wendt, 1999:312).

It is in this context that securitization theory offers an intriguing inverse image of American norms research centered on the generation and propagation of human rights and democratic principles. In viewing the invocation of security as a kind of emergency politics securitization theory shows precisely how the norms liberal constructivists study can come to be abridged or suspended. Understanding the concept of security as having its own set “power politics” (Buzan et al, 1998:32) over who can speak security effectively, and perhaps more importantly why this power is unevenly distributed, would appear to resonate with this desire for a realist constructivism.

Securitization theory then, and the multitude of arguments and iterations it has given life to, do not exist in some foreign universe totally isolated from the interests and concerns of mainstream American IR. The question then is why this approach has so little currency in the ‘homeland’ of the discipline?

* This sense of marginalization by U.S. security studies scholars is not new as evidenced by the recently emerged correspondence between John Mearsheimer and various members of the UC San Diego political science faculty.

** Though this project likely owes part of its existence to the institutional network at the Centre for the Advance Security Theory (CAST).

Hayes, Jarrod and Janelle Knox-Hayes (2014). “Security in Climate Change Discourse: Analyzing the Divergence between US and EU Approaches to Policy.” Global Environmental Politics 14(2): 82-101.

Civilian? Not an Insult